Since the beginning of 2022, the outbreak of the Russian-Ukrainian conflict has led to a surge in global commodity prices, and the disruption of global supply chains caused by the epidemic has continued, further driving up food and energy prices and boosting inflation.

Currently, global is facing persistent inflationary pressures, with inflation in the United States and many European countries reaching the highest level in 40 years. Rising inflation has also exacerbated people's living pressures. Prices have risen much faster than wages, posing a major challenge to the daily life of ordinary families. Higher commodity prices will erode the value of real wages and savings, and lead to poorer families.

In the United States, the CPI in June increased by 9.1% year-on-year, the highest increase since November 1981. US Treasury Secretary Yellen said that US inflation was "unacceptably high." The Fed has raised interest rates by 25 basis points, 50 basis points and 75 basis points respectively since March this year.

U.S. CPI hit a 41-year high in June. The latest data released by the US Department of Labor showed that the CPI rose sharply by 9.1% year-on-year in June, the fourth consecutive month that the year-on-year increase exceeded 8%.

Analysts pointed out that high food and energy prices were the main reasons for the higher CPI in June.

Nearly 60% of Americans worry about wages not feeding their families

Rising inflation not only pushes up the cost of the economy, but also exacerbates the pressure on people's lives. A statistic shows that although the overall wage level in the United States is also rising all the way, after adjusting for inflation, the average hourly wage in June fell by 3.6% compared with the same period last year, the highest decline since 2007. 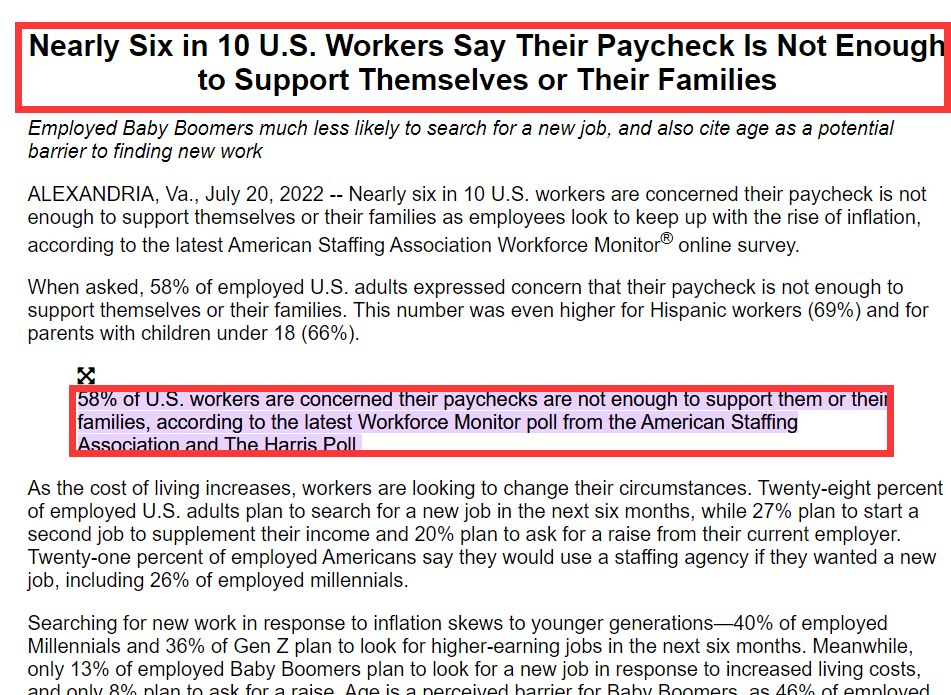 Facing 40-year high inflation, 58 percent of working Americans worry that their salary is not enough to support themselves and their families, according to a survey conducted by the U.S. workforce monitoring agency ASA in early June, and in the group of parents with children under 18 Among them, this figure is even higher, reaching 66%.

Another interesting phenomenon is that in the face of the same high inflation, different consumers feel and respond in very different ways. Recently, many American media reported that in the summer when the dollar continued to strengthen and the euro fell below parity against the dollar for the first time in 20 years, a large number of American tourists began "retaliatory" trips. The store has opened the "buy, buy, buy" mode.

According to a survey, American tourists spend an average of $402 per person per day in France for a 10-day trip, with an average budget of a staggering $7,687, far exceeding that of other foreign tourists.

In addition, a recent Bloomberg report mentioned that more and more Americans are planning to move to Europe due to rising living costs, rising housing prices, a soaring dollar, and worsening domestic security in the United States. In addition to the more common retired and wealthy groups in the past, there are also young people who have been excluded from the domestic market by the high housing prices in the United States.

To rein in rising prices and prevent inflation from becoming more entrenched in all aspects of the economy, the Federal Reserve is raising interest rates aggressively at a rhythm rarely seen in history in an attempt to cool the overheating economy and curb price gains. Some Fed officials have recently hinted that a second straight 75 basis point rate hike is likely at next week's policy meeting.

However, such a rapid pace of monetary tightening has caused great concern to the outside world that the Federal Reserve may lead to a recession. Economists now see a nearly 50 percent chance of a U.S. recession next year, according to a monthly Bloomberg survey. The International Monetary Fund (IMF) also recently noted that it is becoming increasingly challenging for the United States to avoid a recession.

Such an uncertain economic outlook makes more and more Americans feel dissatisfied. A poll released by the U.S. Pew Research Center on July 13 showed that U.S. President Biden’s approval rating has fallen to 37%, and more than half of the people believe that the Biden administration’s policies have made the economic situation worse.

According to the data released by the British Bureau of Statistics, the CPI in the United Kingdom rose by 9.9% year-on-year in August, hitting a new high since records began in February 1982. The Bank of England has raised interest rates by 25 basis points five times in a row this year to curb inflation. With inflation continuing to rise, Bank of England Governor Bailey on Tuesday signaled a 50 basis point rate hike in August. 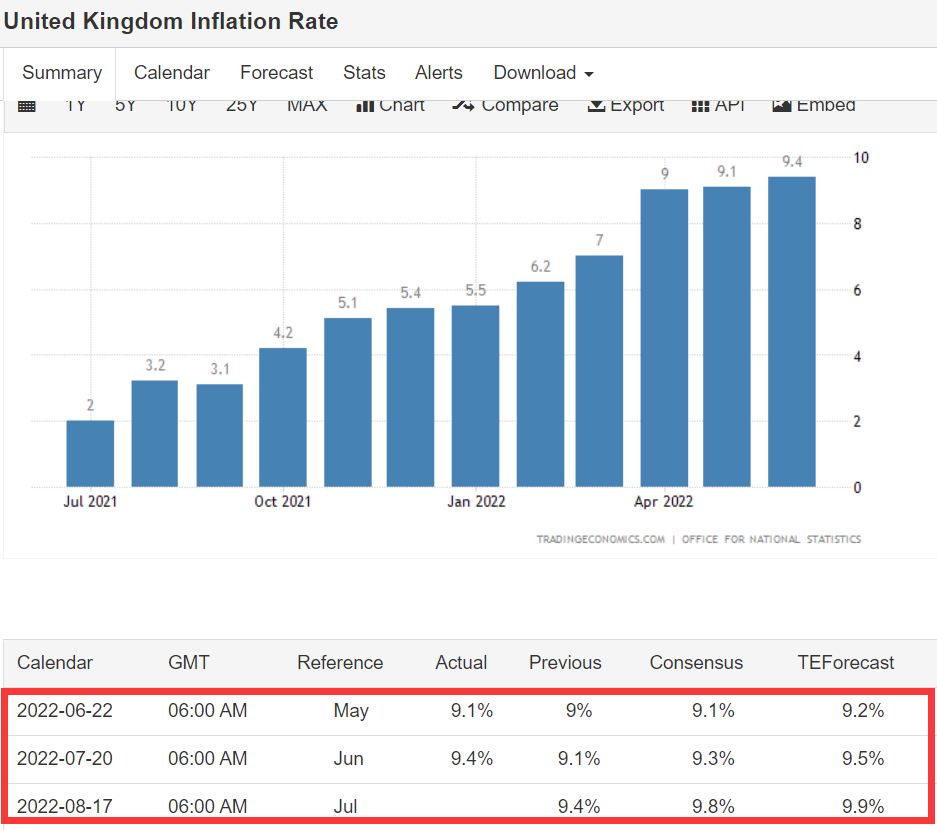 UK inflation, which hit a 40-year high of 9.2% in June, continued to rise to 9.9% in August, nearly five times the Bank of England's 2% target. The United Kingdom is currently the most inflationary of the G7 countries, and it is also much higher than the average annual inflation rate of 8.6% in the euro zone countries.

As the two main drivers of rising inflation - rising energy bills and a broad-based rise in food prices - remain elusive, analysts believe things will change as the annual energy price cap rises from just under £2,000 to more than £3,000 in October. worse.

Inflation is expected to rise further to 12% in October. About 40% of the UK's food needs to be imported, so it faces a bigger impact from rising global food prices. Many essential food items in supermarkets are now rising by double digits, and the average household's annual grocery bill has risen by £454.

The average wage earner has not been able to keep pace with such inflation. Average wages excluding bonuses rose 4.3% from March to May, while regular wages actually fell 2.8% year-on-year after adjusting for inflation. Inflation erodes people's incomes, leading to strikes one after another (The UK's largest container port will be on strike for 8 days, and European shipping may now be severely disrupted).

The Joseph Rontree Foundation (JRF), an anti-poverty charity, said some 7 million low-income households in the UK were going through a "terrible year of economic fear", with a lack of food, heating, toiletries and even the inability to shower properly. More than 2 million households have to default on energy bills.

The latest figures show that interest payments on UK government debt hit a record high of £19.4bn in June and the budget deficit will exceed £100bn this year, almost double pre-pandemic levels. With the UK's public sector net debt now approaching £2.4 trillion, the possibility of a recession could push up government spending, hit tax revenue and further increase the deficit, so the new prime minister's room for future tax cuts has been significantly reduced.

Given that many countries in the United States and Europe are facing serious inflation and economic crisis, we remind all foreign trade people to pay attention to the risk control of shipping and receiving, and beware of abandoning goods at the destination port to avoid any unnecessary loss or trouble.