8-day strike at the Port of Felixstowe

Negotiations to avert a strike at the Port of Felixstowe, the UK's largest container port, broke down on the evening of the 9th at ACAS Mediation Services, local time in the UK. 21-28 August strikes are inevitable and the port faces a shutdown, a move that will have an impact on international seaborne trade in the region, in addition to logistics and transport in the area. 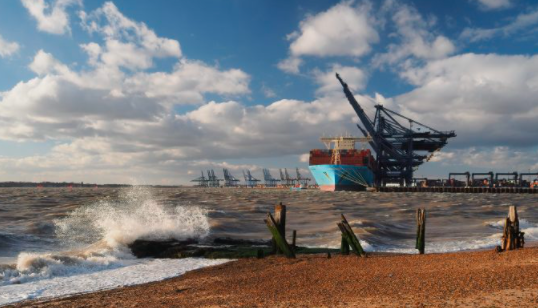 On the 8th, the port increased dock workers' wages by 7% with a one-off payment of £500 ($606), but this was rejected by the Unite union's negotiators.

There are no plans to hold further talks between the two sides before the eight-day strike begins on 21 August, and shipping companies have planned to reschedule vessels at the port, with some considering allowing ships to arrive earlier in order to unload British imports.

Shipping company Maersk has issued a strike warning which is expected to result in serious operational delays. Maersk will take specific measures in response to the current outbreak and is completing a precautionary plan to deal with it. 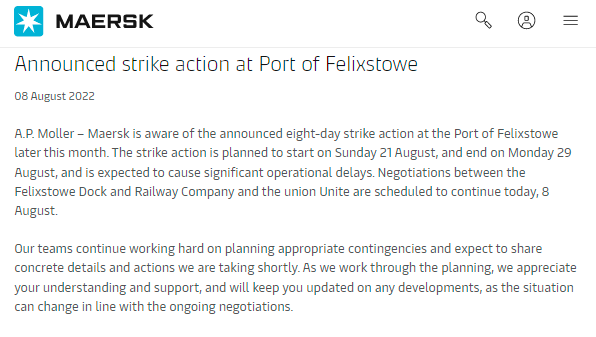 However, United Union official Robert Morton said the strike would continue "unless the port makes an offer of a pay rise acceptable to union members, which Hutchison Ports has the ability to offer us a reasonable pay package, but which it has again chosen to reject." The UAW did not say what was "reasonable pay", but said in previous communications that the port's 7 per cent pay rise was "far from what its members expect".

The port has urged the UAW to consult its members among the 1,900 dockers on the improved offer, but the union said it had an overwhelming mandate to do so after voting 92 per cent in favour of strike action in support of wage negotiations last month.

On the 9th, the two sides issued a contradictory statement, with the Port Authority saying "the union has rejected the port's offer to negotiate again", while the union said "its door remains open for further negotiations".

Since talks broke down, the Felixstowe based port side has argued that a strike is inevitable but questioned whether the dockers have the will to resolve the long-running labour dispute.

One source said, "Most of the workers I know who work at the port have mortgages and face high living expenses and it is not at all certain that they have the will to go on strike for a long period of time, the whole town is centred on the port and many of the dockers have friends and family who make a living from ancillary services such as transport and freight. They will face an embarrassing situation if prolonged strike action leads to a permanent transfer of operations to Southampton or the Port of London Gateway."