Yesterday, we reported that truckers at the three major ports of Los Angeles, Long Beach, and Oakland announced they would go on strike to protest a California bill called "AB5", which is worse for the already congested US ports! (review: A/Long Beach Truckers Work Stoppage to Protest AB5)

"Bad news" came from American ports, and "bad news" from heavily congested European ports on the other side!

German dockworkers will start a 48-hour strike on Thursday as wage talks with employers stall. The strike by 12,000 port workers, which will paralyze operations at major container hubs such as Hamburg, Bremerhaven and Wilhelmshaven, will be the third in an increasingly bitter industrial dispute - the longest strike in Germany and the longest in more than 40 years in Germany Longest port strike. 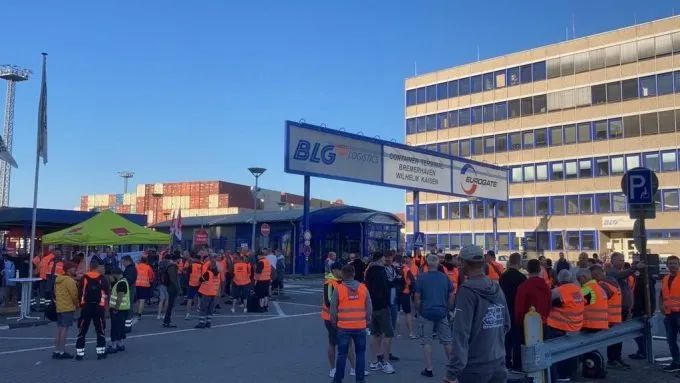 If the strike goes ahead, it will have severe impacts on the liner shipping network and further exacerbate the already existing supply chain congestion at the Nordic container hub.

Dockworkers at German ports will be suspended from 6am on Thursday until 6am on Saturday, the longest dock strike in Germany in more than 40 years, it is understood.

The yard density at the Hamburg terminal had been deteriorating before the proposed strike, allegedly due to the negative impact of wage negotiations, resulting in a reduction in the number of additional sailings at the terminal.

In addition, METRANS announced on Saturday that it was suspending the operation of export trains due to delays in import trains, which caused serious delays in the arrival of containers, which made it impossible to pick up the goods. Meanwhile, ocean carriers are waiting to see if they will get a last-minute respite or intervention to prevent further disruption to Nordic ship operations.

"We don't have any other ports that can handle cargo to Germany, and the ports of Antwerp and Rotterdam are full, so if that happens, we'll be stuck in a situation where ships have to join the queue and wait for a berth." A carrier from Felixstowe people said.

The strike action escalated last week after a sixth round of negotiations between the employers Central Association of German Seaport Companies (ZDS) and union ver.di broke down.

Commenting on the standoff, however, ZDS negotiator Ulrike Riedel complained that despite "increasing offers" the union had "no desire to compromise" and said it had "responded to the demands of union ver.di". Riedel said there was an "offer of up to 12.5%" that included a permanent increase of 8% retroactive to June 1.

She said any further escalation of the strike action would be "totally disproportionate to this proposal and damage not only us but Germany as a whole". "We desperately need a mediation process," she added.

However, after talks broke down, the trade union ver.di representative Schwiegershausen-Güth warned that "further strikes are not ruled out". It rejected the necessary arbitration and called on employers to renegotiate the permanent pay rise.