What is U.S. Customs Import Bond?

For those planning to import goods from a foreign country, there are some basic concepts that you must get familiar with. One of them is posting a customs or import bond. Today, we will tell you about the BOND of US import customs clearance.

- About Bond in the United States

- How to buy Bond

About Bond in the United States:

Bond is implemented by the US Federal Maritime Council (FMC) to ensure the payment of import duties and taxes on goods, and to ensure that all US imported goods comply with the laws and regulations formulated by the customs and fulfill their related obligations.

If the importer abandons the goods for various unexpected reasons and does not pay any fees, in addition to the right to auction the goods overdue, the US Customs can also deduct the fees paid by the importer to buy Bond, which can be used to offset these goods in Other miscellaneous fees incurre 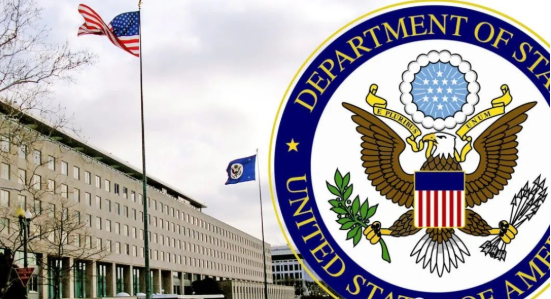 U.S. importers must purchase BOND from customs. Before, even without ISF requirements, customs clearance must be purchased.

The first is Continous bond, also called Annual bond, which only needs to be purchased once a year, and is suitable for importers who frequently import goods. 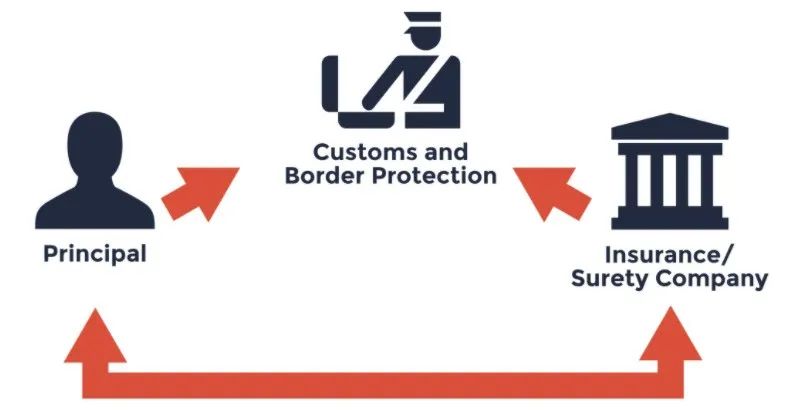 ISF BOND means a security deposit that American importers need to buy. The US customs can deduct money from BOND in order to prevent importers from being fined due to certain factors, so all goods imported into the United States need to buy BOND, ISF It is one of the bonds, called ISF BOND 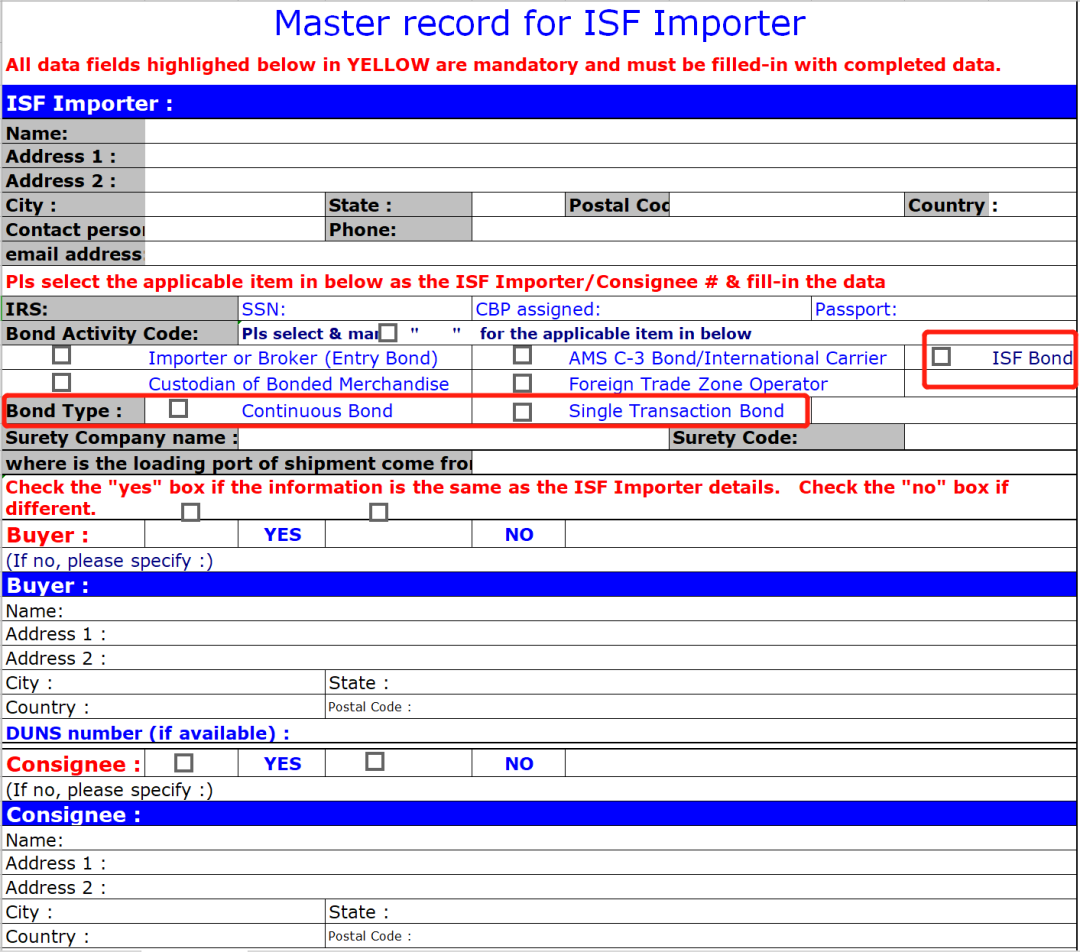 How to buy Bond

Importers who buy pounds can directly entrust U.S. customs clearance banks to assist in the purchase. The buyer needs to fill in the documents CBP Form 301 and return the Bond application (sometimes may need to assist in providing some other documents such as POA, Partnership Papers, etc.), or directly package the above materials and send them to the mailbox bondquestions@cbp.dhs.gov And call (317) 614-4880 for consultation. It should be noted that only one scanned copy of CBP Form 301 is required, and there is no need to send multiple copies.

Refer to the following:

The red box (1) represents the Bond NO. indicated by CBP;

The red box (2) indicates whether the purchase is an annual bond or a secondary bond, and the small box on the right is the effective date of the purchase;

The red box (3) represents the title of the importer, that is, the specific information of the US import customs clearance entity; 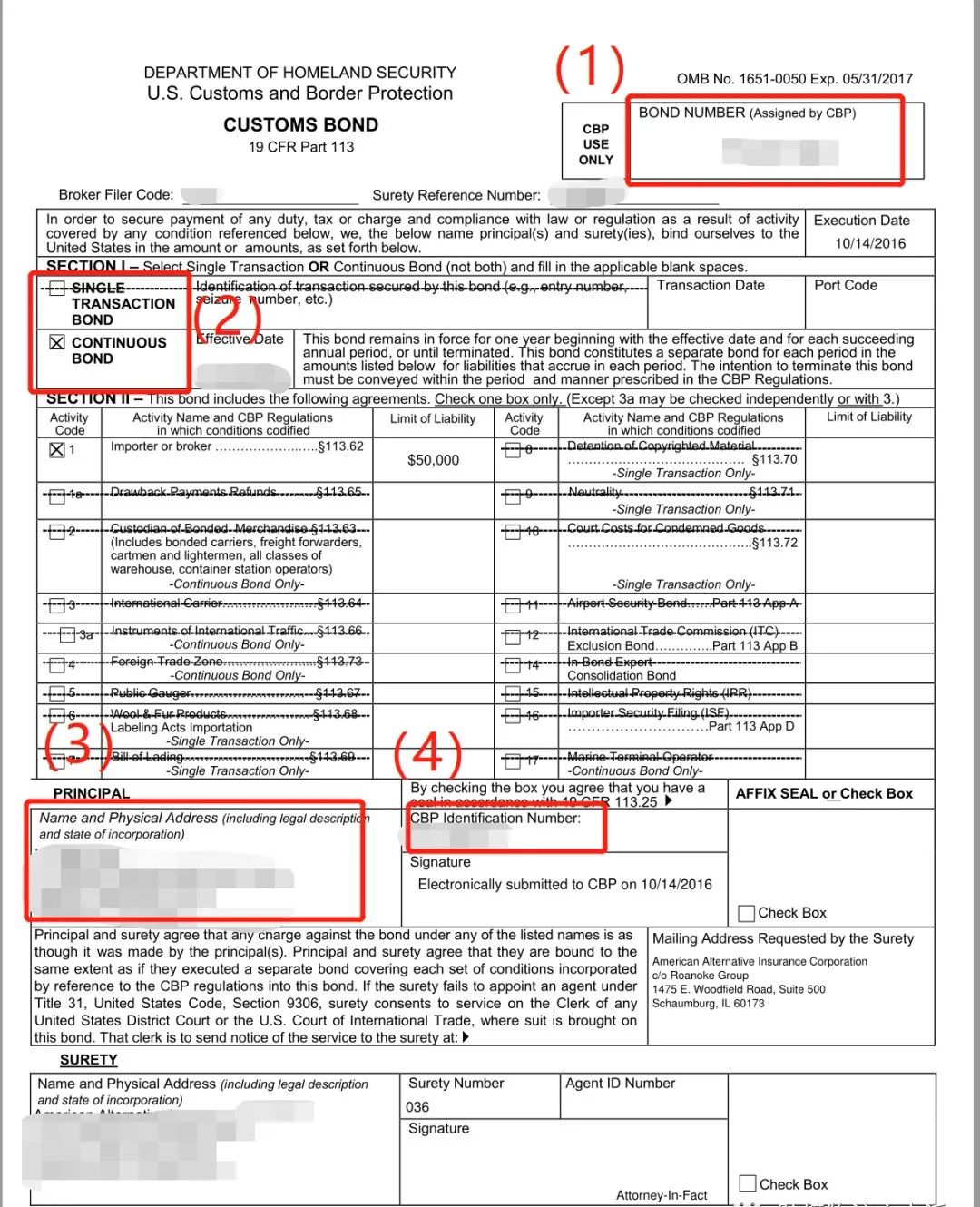 (2) If the shipper is purchased from China and sold on an e-commerce platform in the United States, there is only a consignee in the United States without a physical company, and the shipper is both the owner and the importer. Or the factory sells it to the American consignee in the DDP mode, and all the costs are borne by the factory. The above cases can be cleared in the name of the domestic Shipper: the consignor needs to fill in the customs declaration POA and submit the domestic business license or legal person. The ID card and other information are sent to the domestic freight forwarder, and the domestic freight forwarder forwards it to the overseas cooperative customs clearance bank. The customs clearance bank assists the consignor to obtain the importer's customs registration number, and the registration number can be officially used after the registration number. It should be noted that if you buy pounds in the name of domestic Shipper, you can only buy annual pounds, not secondary pounds. At the same time, even customs clearance in the name of Shipper requires the local tax ID number of the US consignee.

1. Clear customs in the name of American consignee

2. Clear customs in the name of Shipper

In this way of customs clearance, Shipper provides POA (ie Power Of Attorney: Power of Attorney) to the freight forwarder at the port of departure, and the forwarder transfers it to the agent at the port of destination, and the US agent helps the shipper/Shipper handle the importer customs registration number (Importer Customs Registration Number) in the United States. Record of No.); also requires Shipper to purchase Bond; Shipper can only purchase annual Bond, not single Bond.

1) The above two customs clearance methods, no matter which one is used, must use the US consignee's Tax ID (also called IRS No.) to clear the customs. US consignee must provide Tax ID to clear customs.

3) Without Bond, it is impossible to clear customs in the United States.

4) Without Tax ID, it is impossible to clear customs in the United States.

1) Generally speaking, for traditional trade, it only needs to be port-to-port, so when trading with the United States, please remember to confirm with the American consignee whether they have Bond and whether they can use their Bond and POA for customs clearance.

2) If the US consignee does not have Bond or is unwilling to use their Bond for customs clearance, Shipper must purchase Bond. But the Tax ID must be of the American consignee, not Shipper.

3) If the consignor or consignee does not purchase Bond, it is equivalent to not filing with the U.S. Customs. Even if the ten items of the ISF are complete and correct, the US Customs will not accept it and will face fines.

In view of this, the salesperson must remember to ask American customers if they have purchased Bond.

1) For cross-border e-commerce sellers, door-to-door logistics, such as Amazon, Ebay, independent stations, etc., products need to be sent to FBA warehouses, third-party warehouses or even to customers' homes. Generally, the tax number and BOND of the third-party logistics are used for unified customs clearance. This is also the most common operation mode in the market, which is convenient for sellers and saves costs.

2) A small number of Amazon sellers will choose Amazon Official Logistics (AGL for short). AGL logistics is not responsible for domestic customs declaration and foreign customs clearance, that is, sellers should arrange domestic customs declaration materials and foreign customs clearance materials by themselves, as well as the main points of this article. OBJECT, TAX ID and BOND. You can find the right channel/strong forwarder to buy, and the annual BOND cost is about 850USD.

2) The five declarations required by ISF5 are as follows:

Single Bond/Single Transaction - minimum $50 per BL, for every $1000 in excess value, Bond will increase by $5.