US ports continue to be congestion with 125 ships in queue

According to British media reports, Marine Traffic provided ship tracking data show that the United States California on July 15, there are about 125 container ships waiting in North American ports, than the peak of the West Coast blockage in January this year when 150 ships about 16% down, but also 92 ships than a month ago, an increase of 36%.

Sources pointed out that the U.S. East Coast and Gulf Coast ports of container ships have been waiting in the largest city in the United States Alaska - Anchorag), and the current number of ships in the U.S. West Coast queue has exceeded these ports. These three ports combined, the number of waiting container ships is still unusually high.

Since last year, the U.S. port of Los Angeles and the port of Long Beach near the large port of congestion has become an important shipping news. Now as of July 15, 36% of waiting ships left U.S. West Coast ports and 64% left Gulf Coast and U.S. East Coast ports. the cumulative capacity of container ships waiting at U.S. and Canadian ports in British Columbia on July 15 was nearly 1,037,164 TEU, with an estimated total value of cargo waiting at sea of more than $40 billion.

Project 44's monthly tracking report shows that capacity to the U.S. East Coast increased 83 percent this June compared to the same month last year, but is down 177 percent compared to the June 2020 report and down nearly 40 percent since the peak observed in January of this year. In response, Project44 attributed this shift to the fact that many importers are concerned about labor disruptions at U.S. West Coast ports. 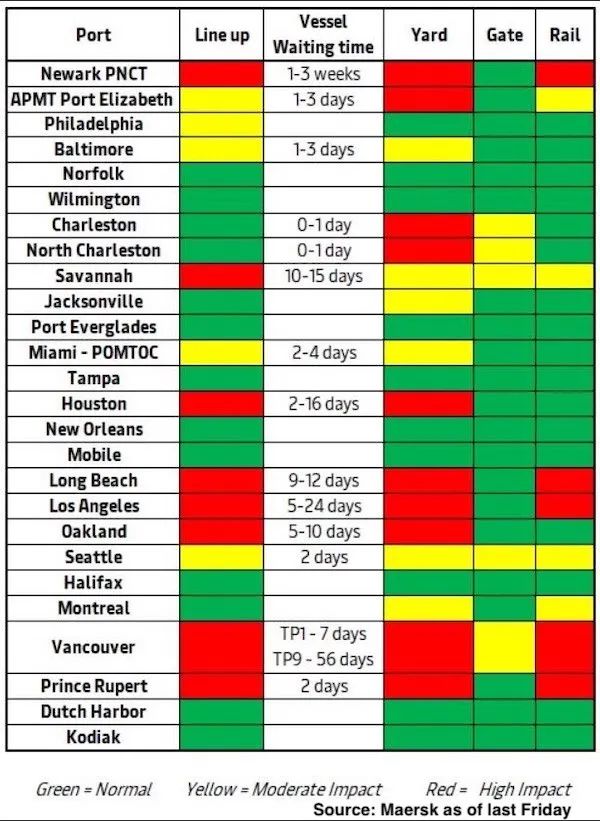 Sea-Intelligence's latest weekly report notes that 70,000 truckers have just gone on strike in California, with tens of thousands of containers clogging U.S. West Coast ports waiting to reach their destinations by rail. Nearly 30,000 rail containers were delayed at the Los Angeles terminal port alone, with the average rail cargo dwell time at 7.5 days. Meanwhile, on the East Coast, congestion levels that have been brewing for the past two months are approaching record levels.

According to German container shipping company Hapag-Lloyd, berth wait times at the U.S. port of Savannah are 10 to 12 days, and yard utilization at the port of Savannah is 89 percent, the company said recently. Near New York and New Jersey on the U.S. East Coast, there were 20 ships waiting as of the morning of July 15, about 180,000 TEUs.

On the Gulf Coast, twenty vessels were waiting near the Port of Houston with 121,196 TEU capacity, while the average was no more than 6,060 TEU. Heberold noted that the Houston Babscast terminal was 86% utilized, with the terminal continuing to face shortages of chassis equipment due to extended dwell times. Elsewhere in the Gulf of Mexico and on the East Coast, two ships are waiting off Virginia and another two are waiting off New Orleans.