The latest U.S. CPI data was released. The July CPI year-on-year and month-on-month data were both lower than expected, indicating that inflation peaked and fell temporarily. But inflationary pressures remained strong, with the food price index rising 10.9 percent year-on-year, the fastest pace since May 1979. Although the energy price index fell month-on-month, electricity prices rose 1.6%.

According to data released by the U.S. Department of Labor, the annual rate of the U.S. unseasonably adjusted CPI in July recorded an annual rate of 8.5%, expected to be 8.70%, and the previous value was 9.10%. The inflation data has slowed down significantly, bringing inflation to the Fed and consumers. hope. 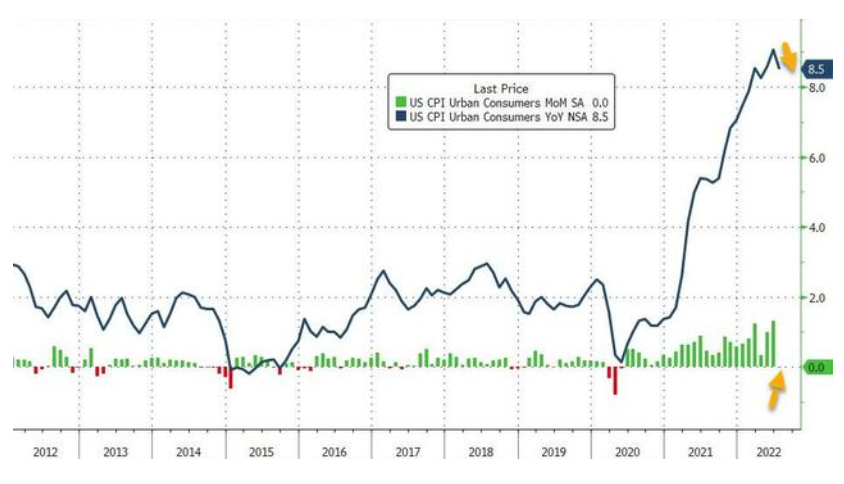 Gasoline prices have been on a downward trend for more than 50 days, providing some relief to U.S. consumers after record energy costs pushed inflation to its highest level this cycle in June. The gasoline index fell 7.7% month-on-month in July, the largest monthly decline in this segment of the report since April 2020, and overall energy prices fell 4.6% for the month. 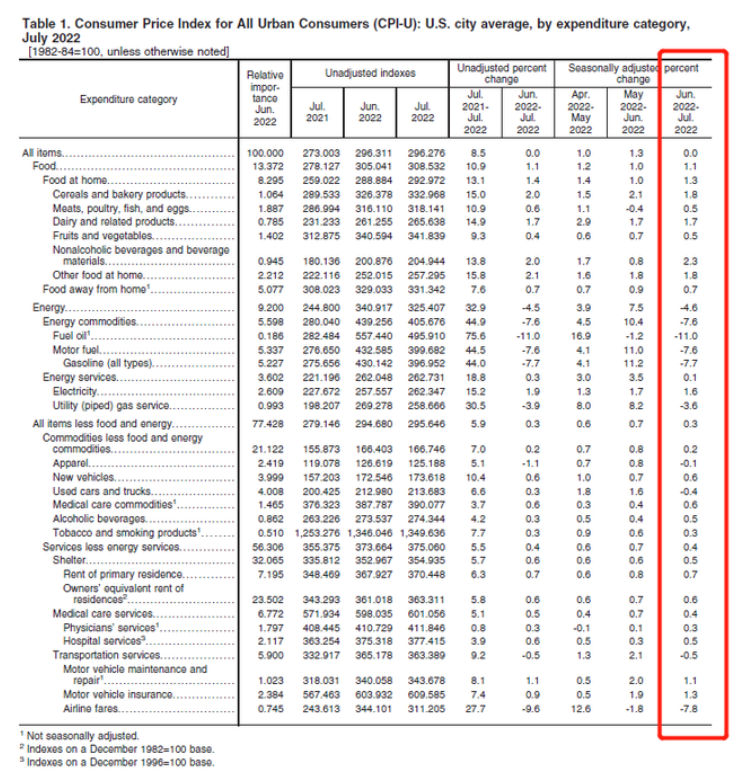 However, the food index continued to rise, rising 1.1% for the month, while the household food index rose 1.3%. Housing costs, which make up nearly a third of the index, continued to rise, rising 5.7% year over year. The easing in headline inflation, combined with strong labor market conditions, could give the Fed a sense of optimism that rate hikes are working, and an elusive 'soft landing' -- that is, in a period that doesn't lead to a labor market collapse, judging by the July data. Lower inflation - is possible. . However, high housing costs and the challenges they present to potential buyers and renters will continue to weigh on the economy.

In addition, according to data released by the U.S. Department of Labor, average hourly wages rose 5.2% in July from a year earlier, and wages have risen by more than 5% year-on-year in every month this year. Labor's rising wages are also a factor in U.S. inflation hitting a 40-year high, allowing companies in a high-inflation environment to pass those costs on to consumers.

U.S. real GDP fell 0.9% on an annualized basis in the second quarter, marking the second consecutive quarter of economic decline. Previously, in response to inflationary pressures, the Fed has raised interest rates by 225 basis points since March. The signal recently revealed by Federal Reserve Chairman Powell is that monetary authorities are more tolerant of economic slowdowns and will continue to raise interest rates until inflation returns to near the target level. Previously, Federal Reserve Chairman Powell had said that there may be another sharp interest rate hike at the regular monetary policy meeting in September. Judging from the July CPI data, the rate of interest rate hike may be reduced.

The U.S. Manufacturing PMI® index was 52.8% in July, down 0.2 percentage points from 53% in June. The figure represents the 26th straight month of expansion for the overall economy after contractions in April and May 2020. But it was the lowest manufacturing PMI® reading since June 2020, when it stood at 52.4%.

[Computers and Electronics] "The extended material lead times are still impacting the business, and a challenging labor market is a huge factor. The backlog is good; we are unable to deliver to customers due to material issues."

[Transportation Equipment] "Chip shortages remain; however, the COVID-19 lockdown in the CN has created a more severe supply problem."

[Food, Beverage and Tobacco Products] "Rising inflation is driving a stronger narrative around recession fears. Many customers appear to be pulling back orders in an effort to reduce inventory."

[Metal Products] "Our market remains supportive; however, I believe the economy is slowing. We are cautious about overbooking. Also, I believe the general market is at the beginning of a recession."

[Plastics and Rubber Products] "Orders are currently full, but there are signs of a slowdown from the fourth quarter."

[Primary Metals] "We expect our business to improve slightly in the next quarter."

U.S. retailers forecast imports to fall by 1.5% year-on-year in the second half of 2022, with imports decelerating further in 2023 as the U.S. economy slows. "Retail sales are still growing, but the economy is slowing, and that's reflected in imports of goods," Jonathan Gold, vice president of supply chain and customs policy at the National Retail Federation, said in an August Global Port Tracker report. Imports in August will be down 3% from August 2021, up 0.4% in September, down 3.9% in October, down 2.7% in November, and down 3% in December. "The euphoric days of U.S. import growth are fading fast," said Ben Hackett, founder of Hackett Associates.