The Port of Felixstowe on the UK's east coast is the largest and busiest container port in the UK and one of the largest in Europe. The port handles over 4 million containers a year, accounting for nearly half of the country's container trade. The strike has meant that cargo ships have had to be diverted to ports in the UK or elsewhere in Europe.

The strike activity was prompted by a labour dispute among employees. The union is demanding that the port increase wages for its members due to the recent spike in the cost of living for employees due to high inflation in the UK.

On 21 August, more than 1,900 port workers at the UK port of Felixstowe began an eight-day strike over wages that is expected to affect supply chains across Europe 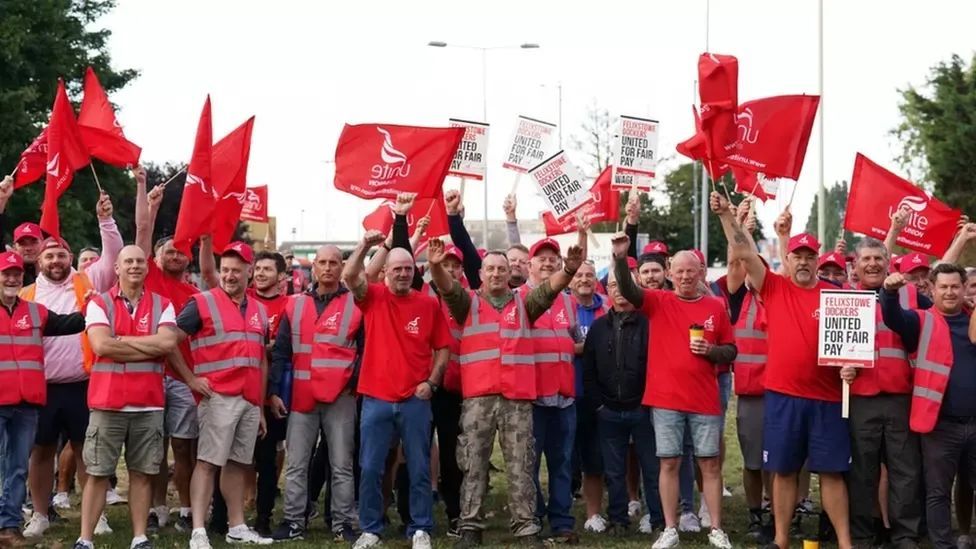 "Strike action will be hugely disruptive and will have a huge impact on the entire UK supply chain, but this dispute is entirely of the company's own making," accused Bobby Morton, a Unite union official, "(the terminal company) would have had ample opportunity to offer our s union members with a fair pay deal, but it chose not to do so."

The current round of port strikes will last until August 29 and the Port Authority said it will have contingency plans in place and work to minimise disruptions during the strike.

The current round of strikes means that cargo ships that would otherwise unload through the port will have to be diverted to ports in the UK or elsewhere in Europe. ALPS Marine, part of data and analysis company Russell Group, previously predicted that the strike at the Port of Felixstowe could lead to more than US$800 million in trade disruption.

Shipping group Maersk, one of the world's largest container carriers, warned that the move would have a major impact, causing operational delays and forcing it to change its fleet line-up.

Photos of empty supermarket shelves are once again making headlines on the country's major media sites, even as experts are predicting that radical strikes could lead to a shortage of goods in the run up to Christmas.

According to local media in the UK, the port of Felixstowe handles almost half of the containerised freight coming into the UK and the strike will disrupt hundreds of millions of pounds of trade and trigger shortages of goods, including in supermarkets such as Asda, Tesco and Marks & Spencer. If the strike continues into the autumn, shortages of some goods could become a problem as shops begin to stock up for the holiday season. 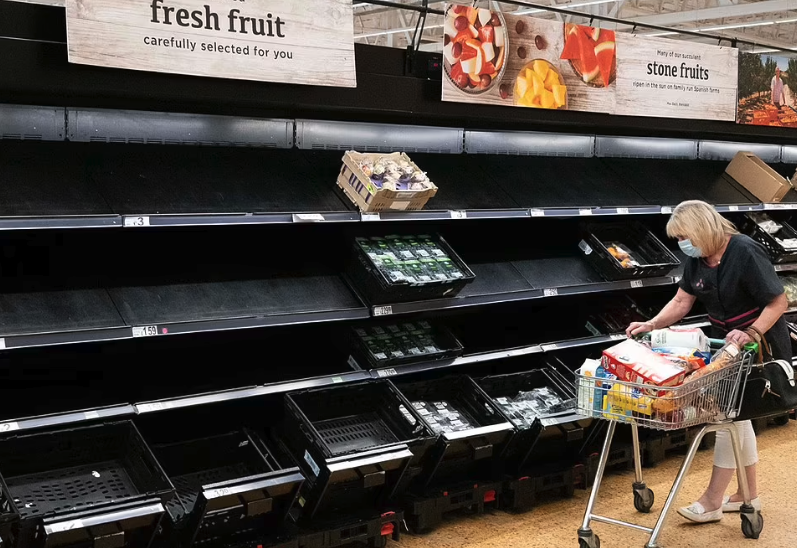 According to data and analysis firm Russell Group, the strike could disrupt trade by more than US$800 million. Although it is too early to assess the blow to the economy, businesses are expecting longer delivery times and higher costs, which will add to the damage to the UK's inflation-plagued economy.

Maersk, one of the world's largest container shipping companies, has already moved three ships to other European ports as a result of the strike action, sparking fears that shipping companies are skipping UK ports, and the company is reportedly monitoring a further 11 vessels that could be affected by the strike.

According to supply chain visibility platform FourKites, the port of Felixstowe, operated by Hong Kong-based Hutchison Whampoa Ports, has begun to ease congestion caused by the Covid-19 pandemic, a trend reflected in reduced container dwell times, but the strike could reverse this progress after similar labour action at ports such as Melbourne and Montreal prompted cargo times to increase by 15-50%.

Digital freight platform Flexport estimates that it could take up to 24 days to clear the backlog of cargo caused by the strike, the knock-on effect of which could worsen congestion away from the UK.

According to the OEC, China is the largest market for goods flowing into and out of Felixstowe, with the largest categories of imports through Felixstowe being furniture, computers and car parts. There are reports that manufacturers such as Rolls Royce, Jaguar Land Rover and JCB may also be affected by delays in the import and export of parts.

In addition, dock workers at the Port of Liverpool, a key hub for transatlantic trade, have also authorised strikes as inflation "erodes" revenues while shipping companies make record profits.

According to IQAX, 33 vessels were affected as of August 21, a figure the company noted could change in the coming days. Further vessel delays will occur later in the week. Lloyd's List reports that workers at the UK's largest port are on strike and supply chain disruptions are expected to continue until after the port closes. Some cargo bound for the UK will be diverted through European ports to avoid the impact of the strike.

Felixstowe handles nearly half (about 48%) of the containerised freight entering the UK and is an important artery for trade with Asia. An analysis by the Russell Group shows that the strike is expected to have a severe impact on the supply chain and could result in a loss of over US$800 million in trade, much of it with Asia. Retailers and a number of industries, including automotive, will see their product deliveries and supplies affected.

According to IQAX, as of 21 August, the following vessels are likely to be affected by the strike:

The following comments are from Vivek Srivastava, Senior Trade Analyst at VesselsValue UK：

“Felixstowe is one of the UK's busiest container ports and an important hub for logistics in the region. From Wick to Woolacombe, any disruption can be a key risk factor for supply chain managers everywhere in their near-term planning decisions.

Total of 713 container vessels have called at Felixstowe port in the last 12 months, second only to London Gateway port and Southampton port.

However, more large vessels are calling at Felixstowe Port. These included 175 Ultra Large Container Vessels (ULCVs) compared to 80 at Southampton and 40 at London Gateway. 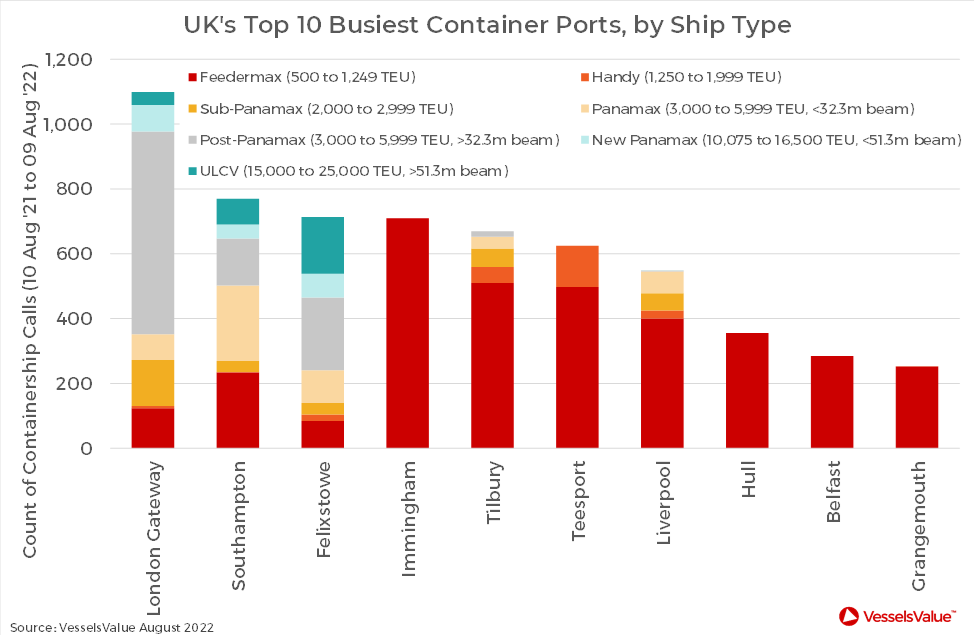 As the strike at Felixstowe port was announced on 8 August, 12 days before the official strike, shipping companies and cargo owners were still able to find alternatives.

Following the congestion at Felixstowe port, major container lines Maersk and MSC moved their AE7 services to the neighbouring German port of Wilhelmshaven. The service originates in Shanghai, calling at Yantian and Columbus (among other areas) en route. However, calls at other UK ports are possible, depending on the type of vessel.

VesselsValue's new Congestion module monitors the global port situation in real time. When Maersk and MSC moved the AE7 service to the neighbouring German port of Wilhelmshaven in October 2021, the average waiting time in Felixstowe peaked at 28 hours, compared to 15 hours over the past five years.

Starting in March 2022, the waiting time at Felixstowe even climbs to 40 hours, but then decreases and is within the normal range. Waiting times at Felixstowe are currently around 10 hours, compared to 21 hours in the same period last year and an average of 8 hours in the previous five years.