While the state of the U.S. trucking business in 2023 remains largely uncertain, analysts at Freight Transportation Research see a severe recession as unlikely. 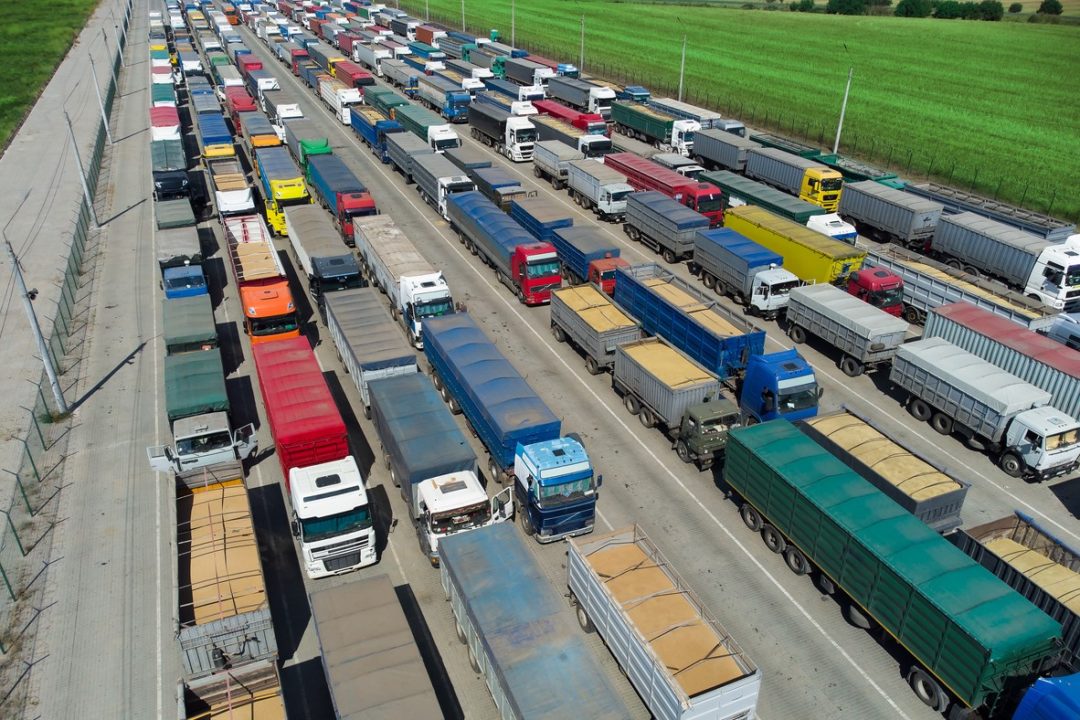 FTR's "State of Freight" webinar on January 12 explores the economic indicators most impacting the freight market, as well as specific numbers for trucking, and provides FTR's outlook for the year. 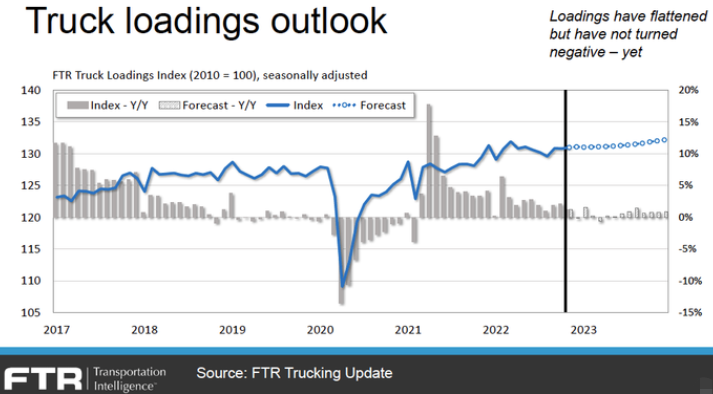 Looking at some of the key economic indicators that affect how much cargo may be moving, there is still some concern in the industry about high inventories.

From the perspective of GDP, it is expected that the data in the fourth quarter of 2022 may be higher than people's expectations and will be quite strong. "However, FTR forecasts it to slow down a bit in 2023.

FTR does not currently forecast negative headline GDP in 2023 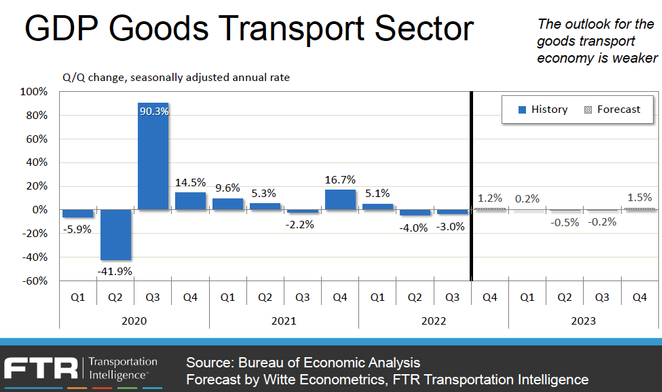 FTR says they have their own version of GDP, which adjusts GDP for freight specific factors. It excludes services and adds imports as a positive number, while imports are counted as a negative number in the federal GDP calculation. The outlook for the freight transport economy is weaker than overall GDP, with negative quarters expected in 2023, he said.

That's not good news for cargo movement and volumes, as the metric appears to be somewhat better than actual loads.

FTR's forecast for demand (truckloads) for the year ahead is "basically flat" with a possible slight negative.

What really stands out is the change in the carrier base. Starting in October 2022, the freight market has already begun to lose a considerable number of carriers. Preliminary data last month showed the industry lost more carriers in December than in any month on record (except December 2005). 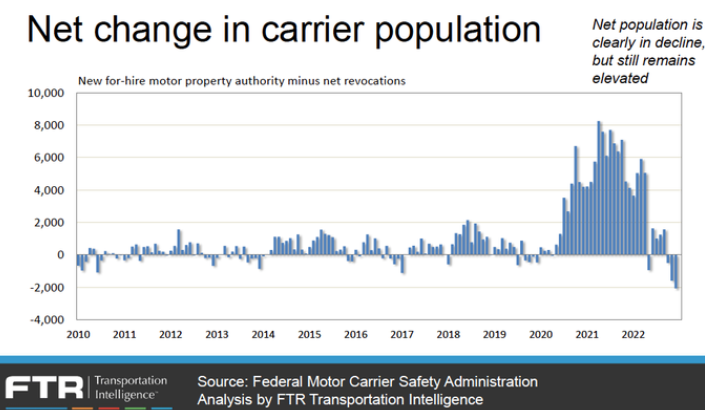 However, this does not mean that the same amount of capacity changes. Because in 2022 when spot freight prices are weak and fuel prices are soaring, many of these companies will not be able to survive normally, some drivers and many small fleets will be consolidated into large transport companies, and you can see a lot of capacity shift from the spot market to contract market.

While the number of new carriers is still well above "normal," on trend we could be approaching pre-COVID levels by mid-2023.

But with salaried employment in the trucking industry seemingly at its peak right now, many of those drivers may not be absorbed. 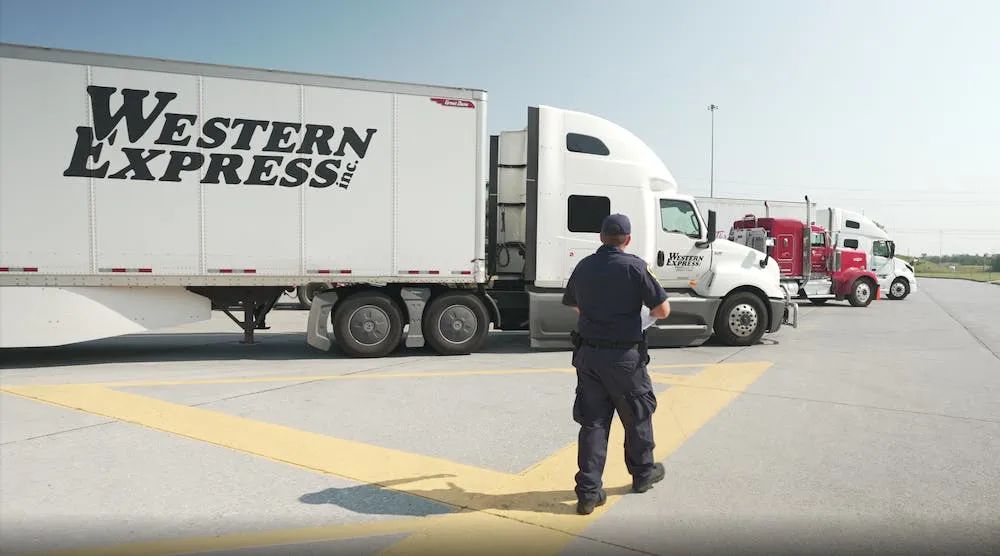 FTR's freight capacity indicator is falling. In 2021 and 2022, there are several months of utilization close to full capacity, but it starts to decline in 2022 and may bottom out in the third quarter. 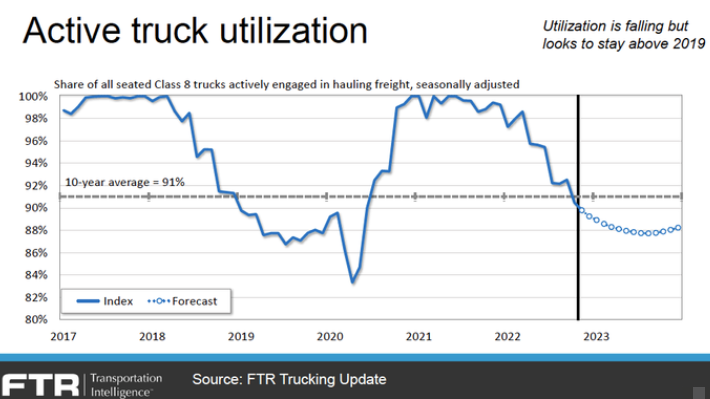 "Spot rates are probably close to a bottom," said Avery Vise, FTR's vice president of freight. "In the environment we're in, it's unlikely that overall freight levels will change much this year."

Asked why we are still hearing talk about driver shortages amid this shift in capacity, Avery Vise said: "Frankly, drivers are just a churn that's always been there. Even in a downturn, driver turnover Also high."