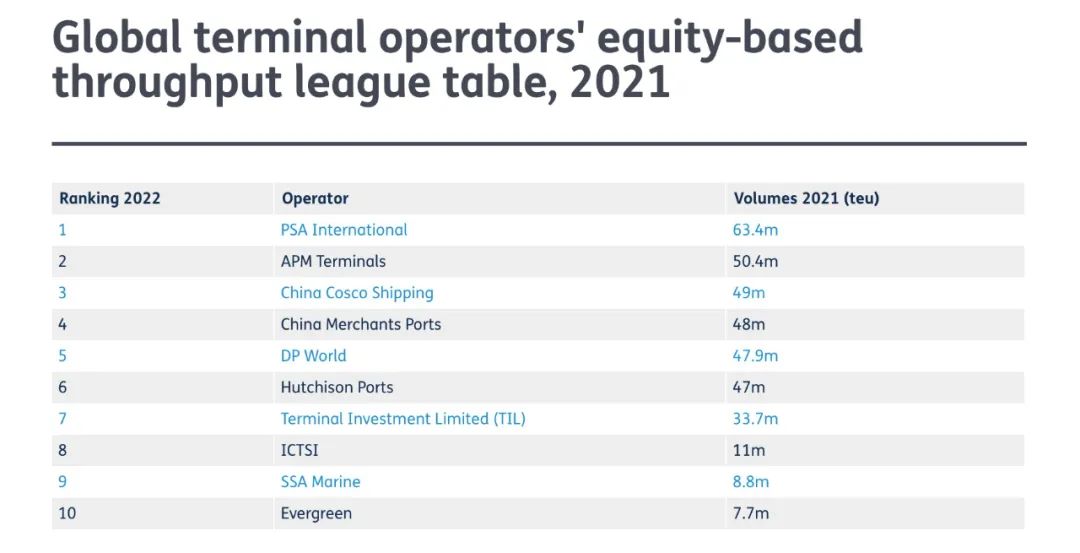 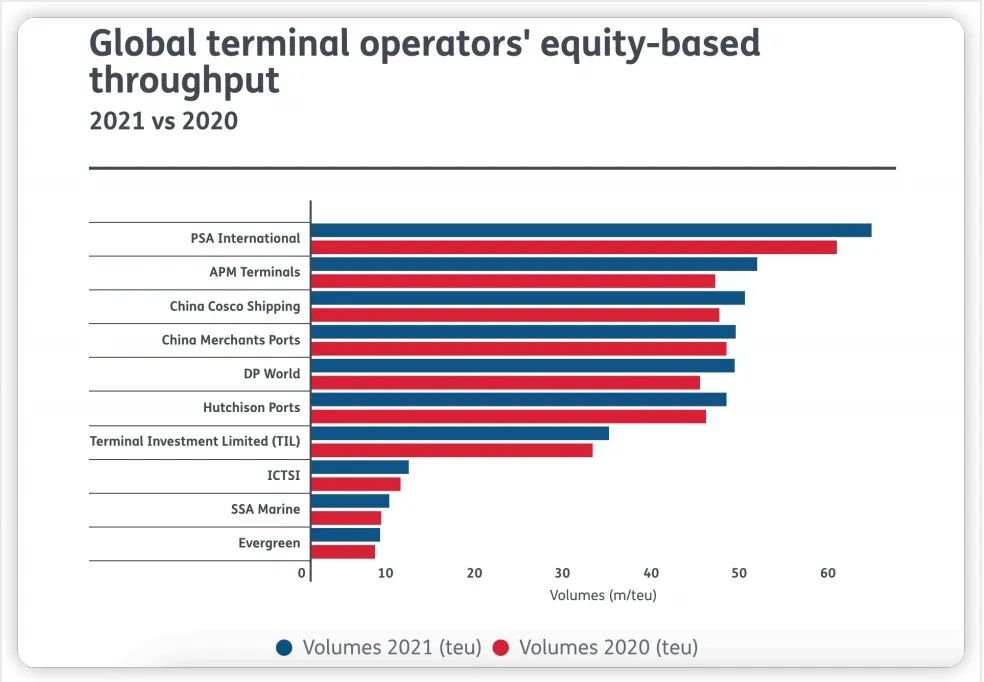 With massive expansion plans underway, PSA International's leading position cannot be surpassed. In terms of equity throughput, in 2021, PSA will complete a container throughput of 63 million TEU, 10 million TEU more than the second-ranked APM Terminals, and a year-on-year increase of 6.5%. Meanwhile, the terminal giant's throughput will continue to increase as it launches its much-anticipated Singapore flagship port Tuas, the world's largest fully automated port, in September 2022. Three berths have been used in the first phase, and when all are completed by 2024, the annual handling capacity of Tuas will reach 65 million TEUs.

Among the top 10 container terminal operators, APM Terminals gained the most. In 2021, the equity throughput climbed from the fourth place in the previous year to the second place, and showed double-digit growth, breaking through 50 million TEUs for the first time, rebounding against the trend in the epidemic. Keith Svendsen took over the helm of APM Terminals in July this year from Morten Engelstoft, who retired at age 1. Keith Svendsen served as Chief Operating Officer for five years under Morten Engelstoft during his long tenure as CEO.

China Cosco Shipping maintained its position in the top three, although APM Terminals headed ahead, but its throughput is also on the rise. In terms of equity throughput, China Cosco Shipping completed a container volume of 49 million TEU last year. The terminal investment portfolio covers China, Southeast Asia, the Middle East, Europe, the Mediterranean and South America, etc., and operates and manages 367 berths in 37 ports around the world.

China Merchants Ports fell back to fourth place. In 2021, its throughput growth will slow down to only 2.2%, the smallest increase among the top ten container terminal operators. In recent years, China Merchants Ports has accelerated its overseas expansion, which has enabled the group to emerge as a global enterprise and become one of the fastest expanding operators. The group's business in South Asia, Africa, the Mediterranean and South America is expanding day by day, and its service network covers 42 ports in 25 countries. It is an active practitioner of the "Belt and Road" initiative.

DP World and its chairman and chief executive Sultan Ahmed bin Sulayem surpassed another independent operator, Hutchison Ports, to take fifth place in this year's rankings. DP World has diversified its business in recent years, investing in everything from the oil and gas industry, technology solutions, ferries to logistics parks, but ports and terminals remain its main business. In the first half of this year, DP World did not slow down investment, and invested up to US$400 million in capacity upgrades, including London Gateway in the UK, Sokhna in Egypt and Jeddah Port in Saudi Arabia.

Hutchison Ports fell out of the top five to sixth, despite a significant increase in terminal throughput. Eric Ip remains at the helm of the Hong Kong-based terminal operator, making him the longest-serving man in charge of the world's top terminal operator. He has led Hutchison Ports to steadily expand its overseas operations and its portfolio has grown to more than 50 terminals worldwide. More projects are on the way, including recent concession deals in Egypt and Rotterdam, the Netherlands. In Rotterdam, Hutchison Ports will develop the Maasvlakte I project in partnership with Terminal Investment Limited (TIL), a terminal investment company owned by MSC.

TIL, a subsidiary of Mediterranean Shipping Company, ranks seventh in this year's ranking, with an equity throughput of nearly 34 million TEUs in 2021. Ammar Kanaan, now in his fifth year at the helm of TIL, is responsible for more than 40 port-owning operations in 27 countries around the world. During his tenure, TIL invested heavily in new terminal projects to support the rapid growth of the Mediterranean Shipping fleet, inheriting the business left by his predecessor Vikram Sharma. Huge investments have seen TIL become a major terminal operator in Abu Dhabi, UAE and Valencia, Spain, and acquire Gioia Tauro, Italy, as well as its latest joint venture in Baltimore, USA.

Manila-based International Container Terminal Services Inc maintained its position among top-tier port operators, with equity throughput growth of more than 9% in 2021. ICTSI has more than 30 terminals around the world. Since its establishment in the Philippines in 1988, ICTSI has focused on terminal projects located in developed and emerging markets in the Asia-Pacific region, the Americas, Europe, the Middle East and Africa. Filipino billionaire Enrique Razon Jr remains ICTSI's chief executive and chairman, while Christian R Gonzalez, who took over three years ago, runs the operation.

SSA Marine is ninth on the leaderboard. Seattle-based SSA Marine achieved the highest growth rate in 2021, largely due to SSA Marine's coverage in the United States. Strong consumer demand in the US in 2021 is driving throughput growth at its terminals. SSA Marine operates more than 20 terminals, including facilities in Central and South America, Oceania and Asia. Worked for Maersk Knud Stubkjær as CEO of SSA Marine for over ten years.

The Evergreen terminal business ranks in the top ten for the second year in a row. Compared with the eleventh-ranked Turkish operator Yilport Holdings, it can be said to be a narrow victory. Because the equity throughput of the two differs only by 100,000 TEU. Like other shipping line-affiliated operators, Evergreen's port operations largely operate in tandem with its liner liner business. Although the Evergreen Group has been relatively low-key in terms of terminal acquisitions in recent years, in November 2022, Evergreen Shipping announced that it has acquired 100% ownership of the Colón Container Terminal (CCT) in Panama. In terms of route trade between Asia and the Americas, CCT is regarded by Evergreen as one of the most important and strategic transportation hubs, and is currently planning to establish a logistics park to support container business development.