While most of the world's busiest ports are in the Asia-Pacific region, Europe remains a major global logistics hub. According to Eurostat, the top 10 busiest European ports based on twenty-foot-equivalent units (TEUs),  - Rotterdam, Antwerp, Hamburg, Piraeus, Valencia, Algeciras, Bremerhaven, Felixstowe, Gioia Tauro, Barcelona - are described below. 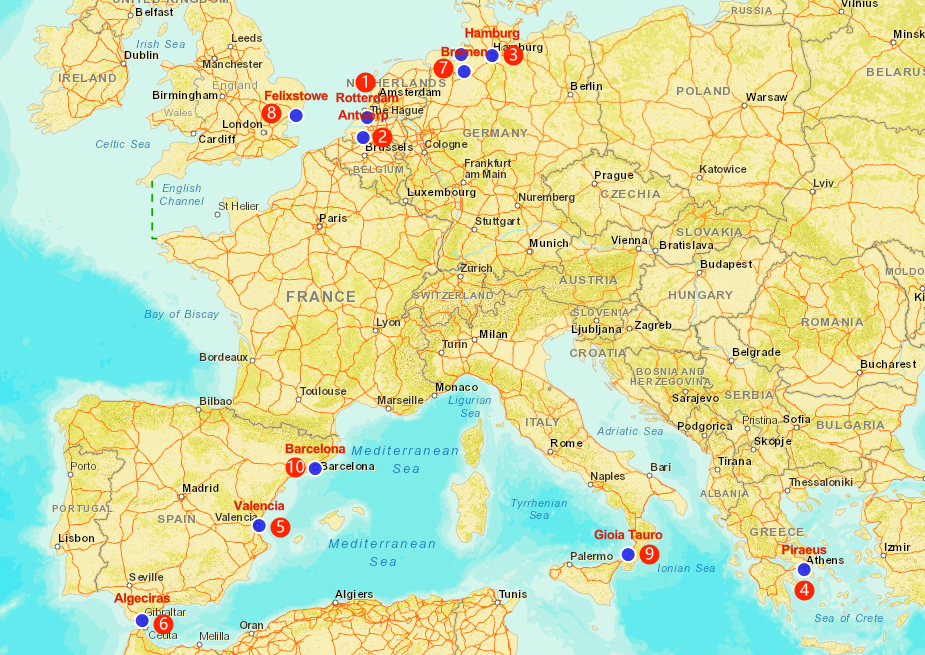 1. Port of Rotterdam, Netherlands - container throughput of over 14.3 million TEU in 2020

The Port of Rotterdam is currently the largest and busiest port in Europe and the 11th busiest in the world, with a container throughput of 14,349,446 TEU in 2020.

Dutch Harbor is the largest transshipment center in Europe, with about 42 deep-sea calls per week, and more than 100 direct deep-sea routes to nearly 200 ports around the world.

The Port of Rotterdam is a European distribution center for empty containers, with a container export area of over 485,622 m2, and its container transport specializing in sales, inspections, refits, cleaning and repairs. 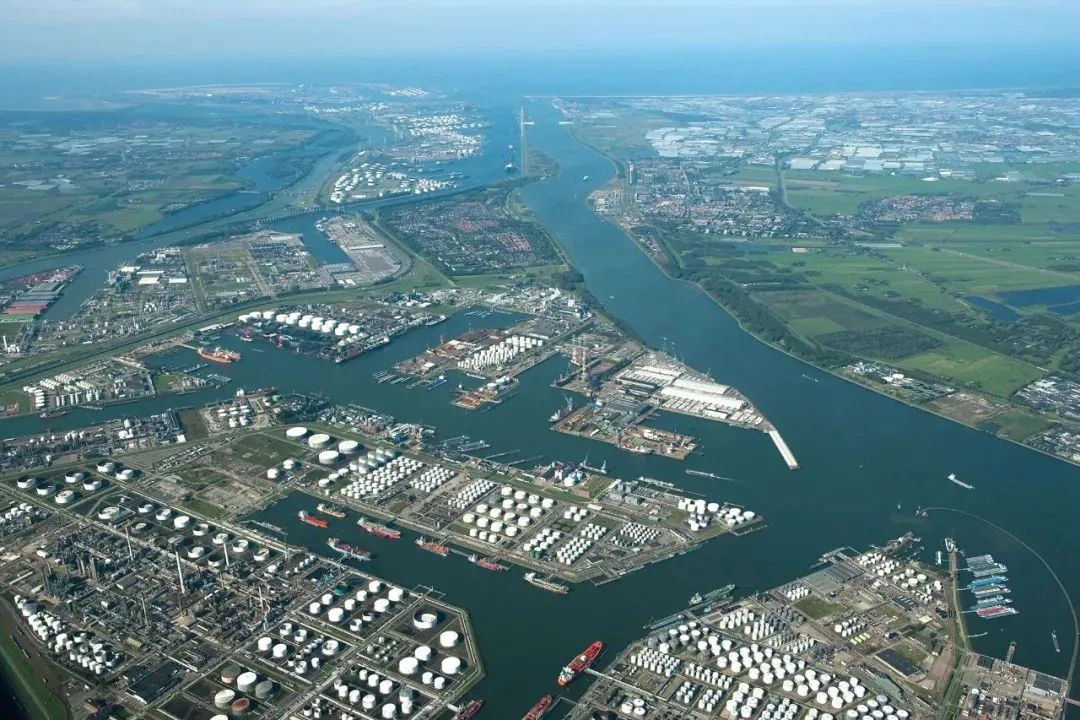 2. Port of Antwerp, Belgium - container throughput of more than 12 million TEU in 2020

With a total container throughput of 12.03 million TEU in 2020, the Port of Antwerp is one of the few European ports to show an upward trend during the crisis.

As the second busiest port in Europe, Antwerp is the gateway to the European continent, with 60% of European purchasing power located within a 500km radius from Antwerp.

The Port of Antwerp consists of 5 deep-sea container terminals, each with triple access, and has the highest productivity in Europe, with an average of 40 lifts per hour per crane. 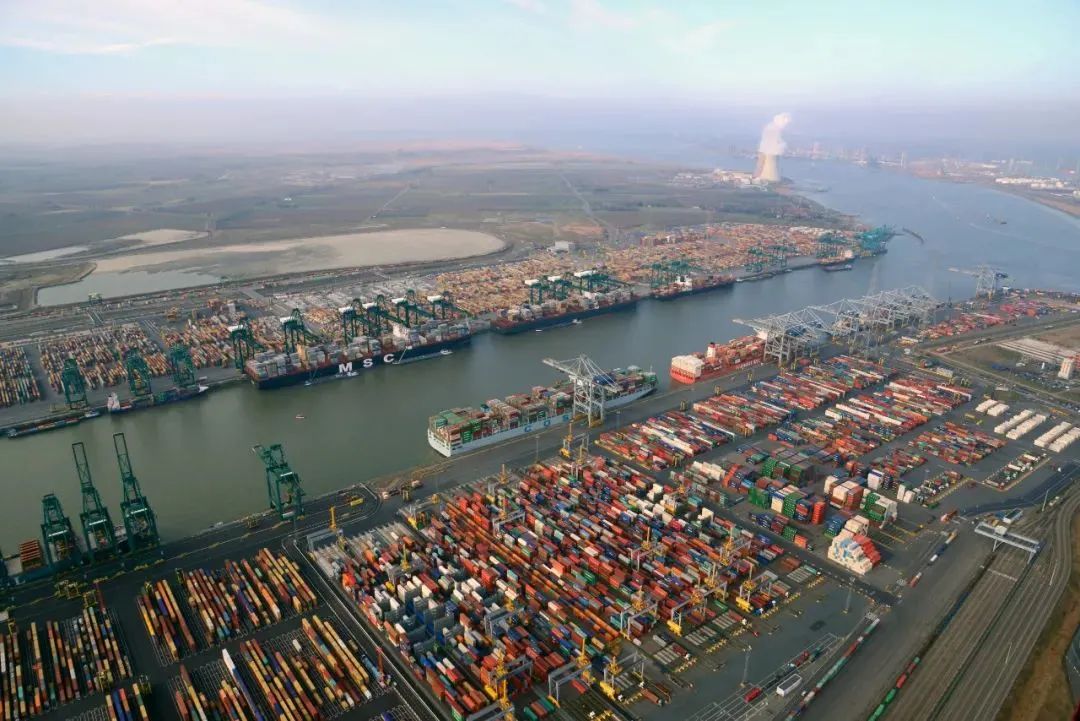 3. Port of Hamburg, Germany - container throughput of more than 8.5 million TEU in 2020

The Port of Hamburg is the 18th largest container port in the world, with a container throughput of 8.52 million TEU in 2020, ranking among the European leaders. 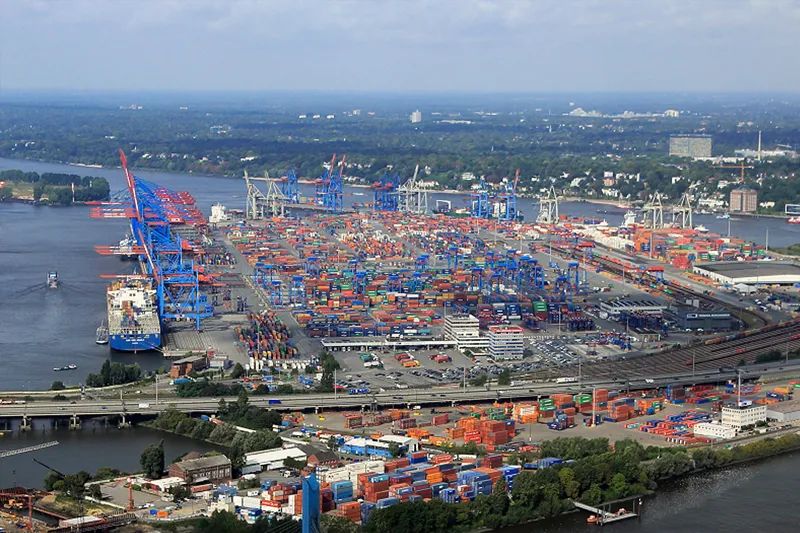 Located at the crossroads of Europe, Asia and Africa, with direct access to the Mediterranean, Black and Adriatic Seas, the Port of Piraeus plays a vital role in international maritime transshipment trade.

Chinese shipping giant COSCO Group has owned the Greek port since 2010, and its participation has seen container throughput at the port of Piraeus surge by 296 percent compared to the latest figures in 2007. 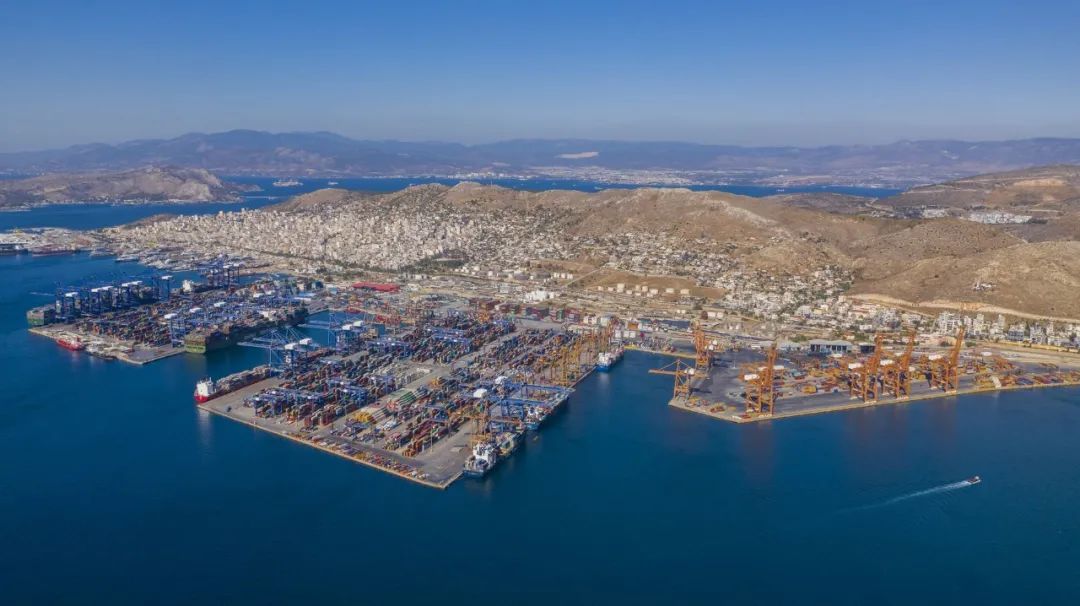 The Port Authority of Valencia (PAV), also known as the Port of Valencia, manages three state-owned ports on the east coast of Spain, Valencia, Sagunto and Gandia, with a total length of 80 kilometers and is the fifth busiest port in Europe. Container throughput in 2020 was 542,8307 TEU.

The port has an intermodal infrastructure that provides a gateway to major cities in southern Europe and Spain by rail and road. It distributes goods in a radius of 2,000 kilometers in European countries and North Africa, representing a market of 270 million consumers.

The port has an intermodal infrastructure that provides a gateway to major southern European and Spanish cities by rail and road. It distributes goods within a 2,000km radius of European countries and North Africa, representing a market of 270 million consumers.

The Spanish port has closed the gap with Piraeus due to a slight drop in container volumes in 2019. 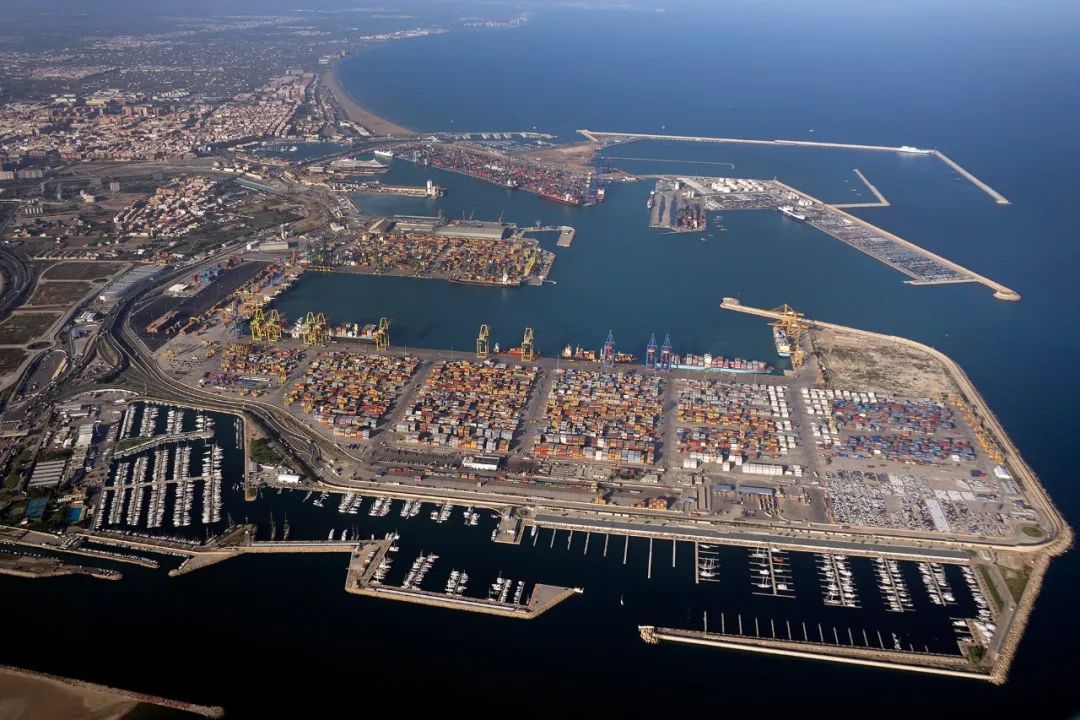 The Port of Algeciras is the second Spanish port on the list and the sixth busiest port in Europe, with a container throughput of 5,107,873 TEU in 2020.

Algeciras consists of multiple maritime infrastructures scattered across the Gulf of Gibraltar and is the closest European port to the African continent.

Offering services from all over the world, the Iberian port is one of the fastest growing ports in Europe, with its APM and Total Terminal International (TTI) terminals capable of accommodating vessels over 18,000TEU. 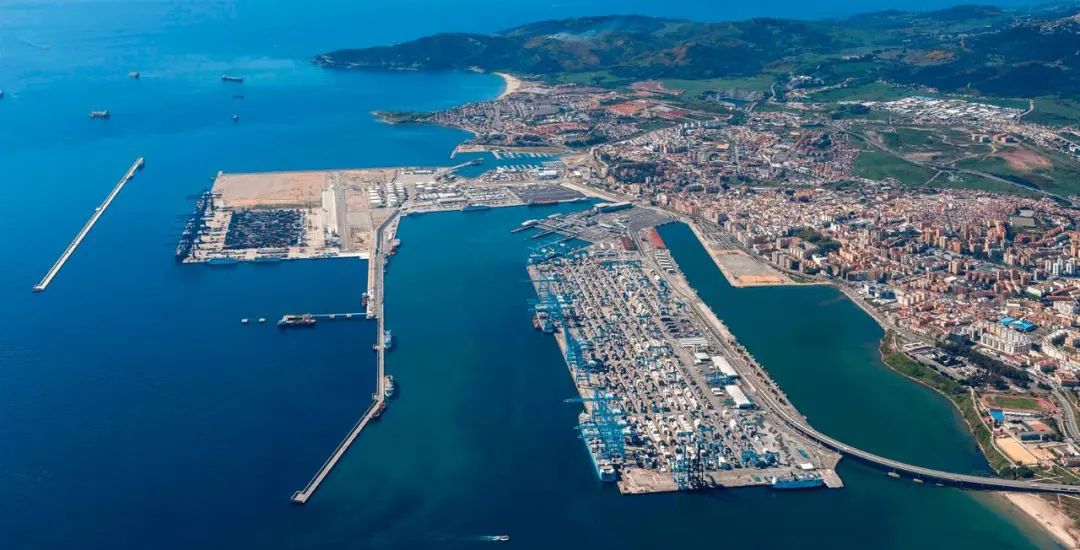 7. Bremerhaven, Germany - container throughput of over 4.7 million TEU in 2020

Bremerhaven consists of two commercial ports, Bremen and Bremerhaven, with a container throughput of 4,771,000 TEU in 2020, ranking seventh among the largest container ports in Europe.

The two ports have a total of 14 large container ship berths and a railroad, and half of the containers are transported inland by rail, which are the main factors that make Shuanggang a suitable transshipment location.

The port is managed by Bremenports GmbH & Co. KG. 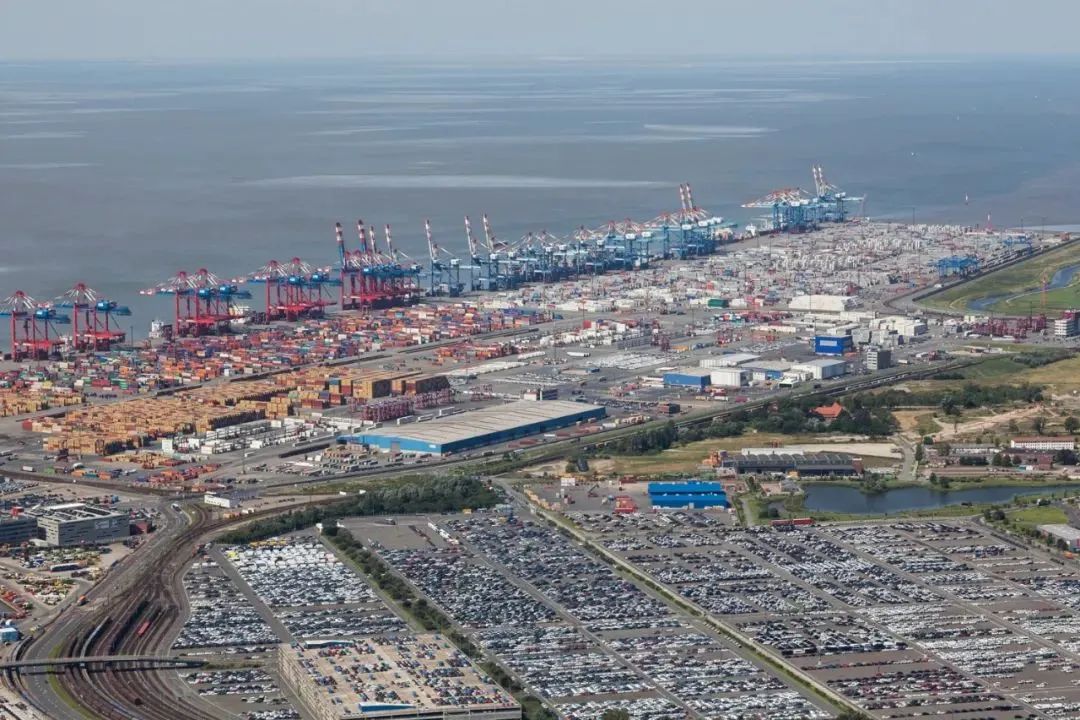 The Port of Felixstowe in the UK is the first dedicated container port in the UK and the largest container port in the UK (accounting for about 48% of the UK). Its container throughput in 2020 is 3,435,000TEU, ranking 8th in Europe and ranking globally. Section 51. The Port of Felixstowe is located in northeast London, across the sea from continental Europe. It is operated by Hutchison Whampoa and plays a vital role in maintaining the flow of British trade. Rail and road link the port with the central region. Distribution centres with locations that provide direct access to other European ports.

The Port of Felixstowe is operated by Hutchison Ports and plays a vital role in keeping UK trade going, as its rail and road link the port with distribution centres in the Midlands and its location has direct access to the rest of Europe port.

Known for its decarbonisation activities, the UK port is equipped with 22 rubber-tyred gantry (RTG) cranes that use up to 40% less fuel than standard machines. 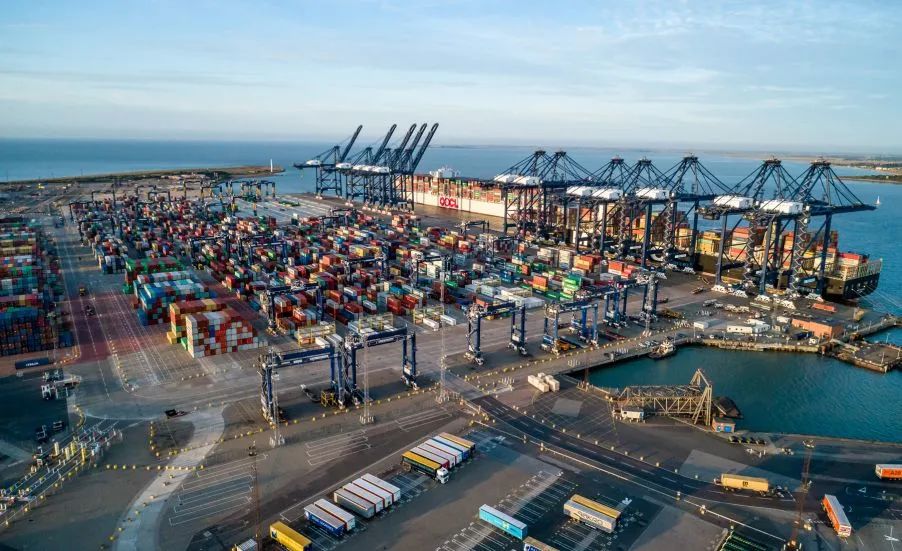 The port has a surface area of more than 853 meters and is able to accommodate transoceanic vessels transiting in the Mediterranean. 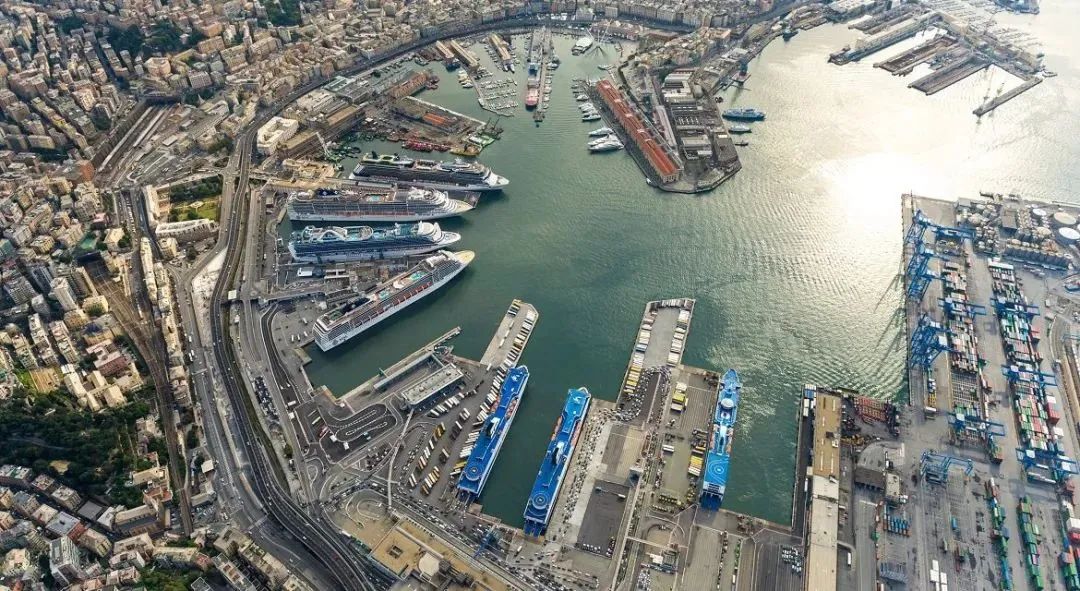 The port consists of two container terminals with a berthing line of more than 3,000 meters and provides about 100 shipping routes to 200 ports on five continents. 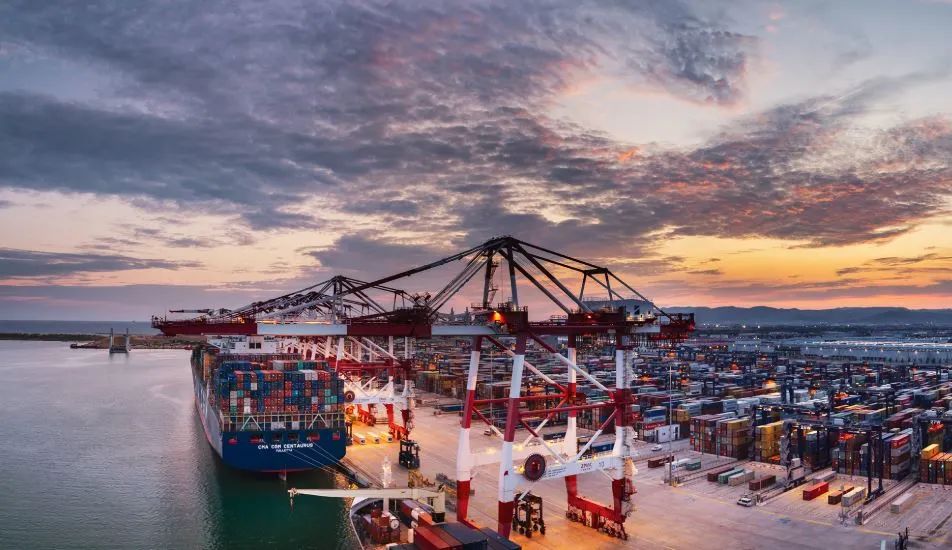