The U.S. recession from a freight perspective

CNBC noted in a Sept. 5 article that academics and analysts' forecasts range from recession inevitable to unlikely, and the answers given in either direction vary widely. 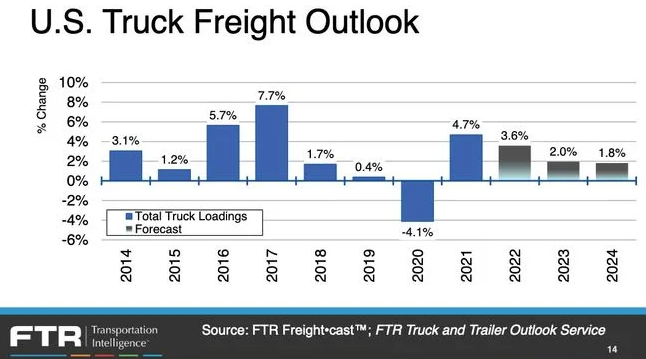 Eric Starks, president and CEO of FTR, a US-based research association for the trucking industry, likens the situation to a baseball game with a broken scoreboard. What inning are we in? How many are out? How many people hit base? Without this data, it would be difficult for teams to decide what to do next, he told truck industry attendees.

In a recent HDTX (Heavy Duty Trucking Exchange) speech on America Online, we talked about the overall economy and trucking, the epidemic, the supply chain, and the impact of the Ukraine-Russian war, which made it difficult to understand the current situation. The traditional definition of a recession is two consecutive quarters of economic contraction, but this one doesn't seem to be working, especially given the trucking environment. 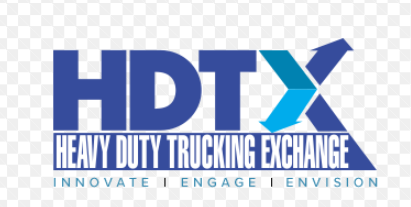 Transportation and logistics researcher and economic analyst Jeff Kauffman, another HDTX online presenter, said that typically, freight data precedes the economy, and a freight recession precedes a recession by one to two years.

"Is a recession inevitable given the Fed's fight against inflation, the fall in the value of consumer household assets ... and the Ukrainian-Russian war?" Kaufman said. "With today's truck fleet, how do you plan for the future? "

Eric Starks and Jeff Kauffma provided HDTX attendees with some insights on economic and freight metrics:

Inflation has been a major concern, along with the risk of the Fed overcompensating as it tries to slow the economy. But Eric Starks noted that inflation appears to have started to slow, based on the core consumer price index, which excludes the volatile food and energy sectors.

Breaking down the main components of inflation, Jeff Kauffma looks at the prices of various commodities - corn, heating oil, aluminum, steel, etc. trucking spot rates and other indicators, saying, "While inflation is still high right now, , but we can see from our data that it has fallen back now."

The slowdown in employment in the consumer goods and technology industries is not because profits have been hurt, but because companies have lost access to the means of production due to supply chain issues. " 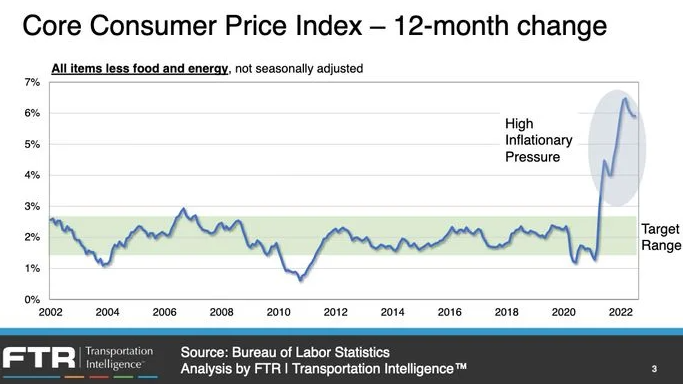 ▲Inflation is still high, but easing.

Retailers have been dealing with higher-than-expected inventory this year. Import shipments into North American ports have remained consistently high, but the export market hasn't actually picked up. "It's a little concerning in some ways, but it shows we have a fair amount of health needs," Eric Starks said.

Jeff Kauffma said that while the latest corporate earnings season has shown a bit of a chill, there's nothing to suggest a recession is coming. Due to supply chain issues, many retailers stock up on the wrong types of merchandise. Walmart and Target have too many bikes, outdoor furniture, and big-screen TVs, but not enough of them in terms of what people buy. "

Jeff Kauffma pointed out that since the stock market peaked in late January, how much reason can the decline in the S&P 500 and Nasdaq reflect a recession? "

Jeff Kauffma explained that the S&P 500 trades at 17 to 18 times forward earnings, and those valuations are in line with inflation expectations of 3% to 2.25%. "The stock market bet is that investors believe core inflation, currently at 6%, will fall back to around 3%. That's above (the Fed's target) long-term rate of 2%, but it's still much better than in the past," he said.

What do these economic numbers mean for trucking?

With the survey of the 30 largest publicly traded freight companies, "we can see a continued upward trend in contract rates," said Jeff Kauffma.

“A lot of people think that because of capacity and supply chain constraints, freight is being forced out of natural patterns,” he explained, and these alternatives tend to be more expensive. "We've seen a slowdown this year -- not because of increased capacity, but because freight is back where it should be." It's not an imbalance in capacity and freight, he believes. 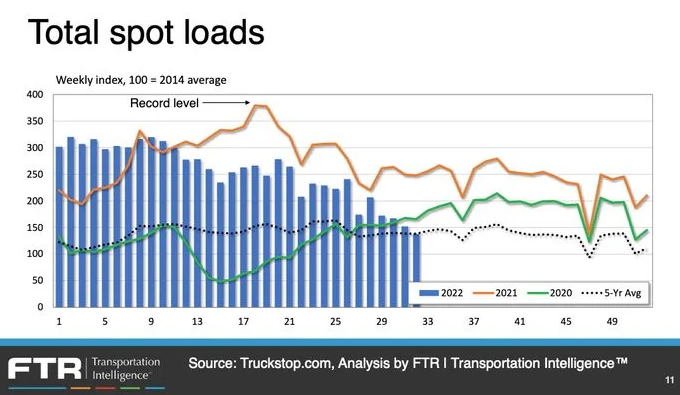 ▲As the market begins to normalize, cargo volumes on the spot market are also returning to normal levels (dotted line is the 5-year average).

Both the freight market and freight rates have experienced shocks due to the ongoing impact of COVID-19 and subsequent supply chain imbalances.

Looking at the spot market, Eric Starks said, "it helps to understand the situation we're in. We look at the volume of shipments in the system ... and we see that the number of shipments is now returning to the average level, more like a kind of normalization. So the next question is, will we continue below this level, or will it stabilize?"

Spot rates are falling, but they are still significantly above average. If we look at spot prices instead of fuel prices, we are still above pre-pandemic levels.

The trucking outlook remains relatively healthy, with analysts forecasting 3% to 3.5% growth this year, which they believe will decline to around 2% in 2023 and 1.8% in 2024, according to FTR. Eric Starks said that if the economic slowdown exceeds the company's forecast, "it could flatten our market in 2023, but we don't have negative growth in our forecast. This is different from a normal recession, in which case, What we're seeing is a big cut in freight."

Eric Starks said truck utilization is starting to fall back, but it's still above the 10-year average, "suggesting that from a pricing standpoint, there's still a little bit of pressure in the system." 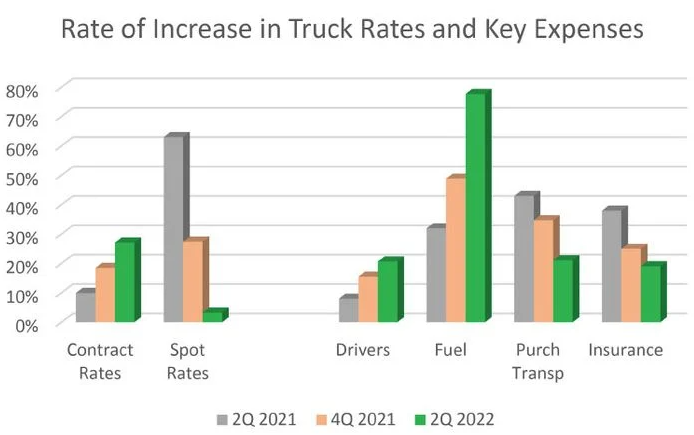 Are we in a recession? A recession is coming?

Jeff Kauffma points out that, typically, freight is growing faster than real GDP. But when real GDP, which represents economic growth, is compared to ACT Research's freight composite index, a historical 1% of GDP is consistent with a 2-3% freight deterioration. By this standard, the ACT's forecast for 2023 would be in line with a recession.

Meanwhile, rail loading figures have been artificially compressed by factors such as last year's poor grain harvest and chip shortages. "Railroads are optimistic about the rest of the year."

Jeff Kauffma concluded: "The normal recession line has not been triggered."

- Rates continue to rise (but may peak)

- Rail traffic is not yet normal, but is improving from restricted levels

- Falling spot truck rates, more of a paradigm shift than a lack of demand

"All in all, we feel the market has some support, which means we're not going to take a big dip," Eric Starks said. "We will continue to hear about risks, but the answer to whether those risks will affect our markets is not immediately obvious."

Eric Starks finally said that the current data does not indicate a typical recession, because we are coming out of the new crown epidemic environment. Even though we have had two consecutive quarters of negative GDP growth, it doesn't feel like a recession. "