About 25,000 freight truck drivers in unions across South Korea began an indefinite general strike on Tuesday, demanding an extension to the government's freight rate system to guarantee basic wages in response to rising fuel costs. Thousands of truck drivers have gone on strike at major ports and container warehouses, hoarding cargo and slowing or halting shipments at ports, the latest threat to already strained global supply chains.

The International Transport Workers' Federation (ITF) said in a statement on its website on Tuesday that about 25,000 members of the South Korean truckers' union had protested at 16 locations across the country, according to estimates by its affiliated organization the Korea Public Service Transport Union, in an attempt to prevent "safety". The delay of the "rate system" legislation. 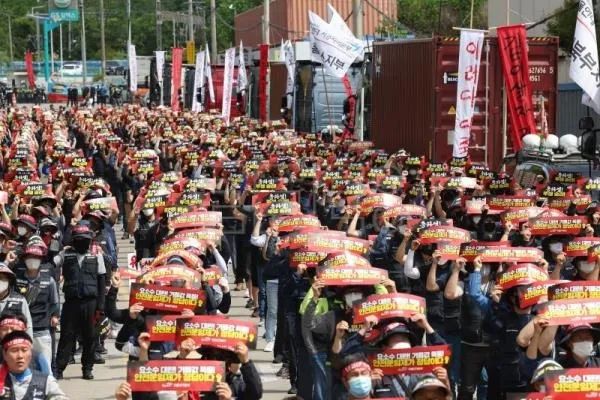 The "Safe Freight System" implemented in South Korea in January 2020 is a system that guarantees the lowest level of freight for truck drivers. It aims to improve the working environment of transport workers and effectively avoid overwork, overloading, speeding and other phenomena. It is reported that the implementation of the system for three years, will expire on December 31 this year. But the conservative government of President Yin Xiyue has delayed discussions on "safe shipping" legislation.

Fuel prices and the cost of living have soared this year, and truck drivers are paying more for diesel than ever before, and their incomes have been hit hard.

At present, the transportation speed of Busan New Port, Pyeongtaek Port and Uiwang City Container Base in Gyeonggi Province has slowed down or stopped.

The strikes come as global supply chains struggle to recover from the blow. While not all drivers took part in the protests, South Korean exports of everything from steel to plastics to consumer goods could slow if the demonstrations continue for weeks, South Korean media said.

Goods are being hoarded

"The impact of the strike has been felt at ports, petrochemical plants and other logistics centers," said the cargo truckers' union (CTS), which is part of the South Korean public service transport union.

Hankook Tire & Technology Co., a South Korean tire maker that typically transports about 70 containers a day, said on Tuesday it was unable to remove tires from its Daejeon plant. The company said more than 70 percent of tires produced at its two factories in Daejeon and Jinshan are exported. 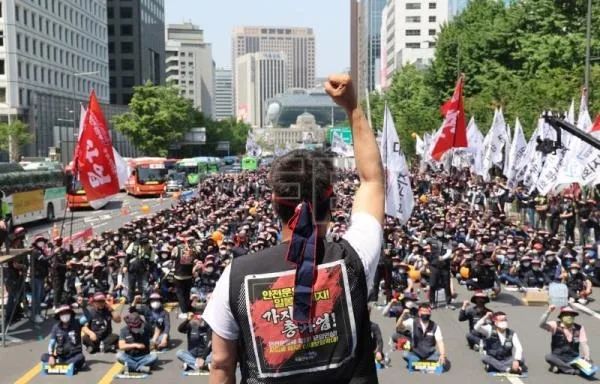 The total amount of steel shipped domestically from Posco's two plants fell to 35,000 tonnes/day, well below the normal volume of 100,000 tonnes/day. Soju producer Hite Jinro's supply fell to 38% of its normal level as its outsourced truck drivers joined the protests.

So far, the impact appears to be limited, with all 12 South Korean ports operating as usual as of 10 a.m. local time on Wednesday (8th). South Korea's largest shipping company HMM said there have been no major shipping disruptions so far. HMM has formed a joint venture with PSA Group to operate a terminal in Busan.

The Port of Busan is the seventh-largest port in the world, transporting about 23 million containers last year, according to South Korea's Ministry of Oceans and Fisheries.

The Busan Port Corporation said it had blocked the vehicles of protesters trying to enter the port area, and police had stepped in to ensure the smooth flow of vehicles.

It was the first mass strike since President Yoon Seok-youl was elected. "This issue is difficult to resolve, especially when the new president is from a conservative party and is more focused on economic growth than social welfare," said Kim Ki-Chan, a professor of business administration at the Catholic University of Korea. "It may take months for the government and unions to solve this problem.”

When asked about Tuesday's strike, Yoon Seok-youl said he "will deal with any illegal activity by workers or employers in accordance with the law," without elaborating on the details of the deal.

According to Yonhap News Agency, on Wednesday (8th), 15 union truck drivers who were on strike were arrested on suspicion of obstructing business operations at the Haite Jinro Icheon plant.

About 4,000 protesters protested overnight at the Port of Busan on Tuesday, and another 7,500 union members will join the protests on Wednesday, South Korea's Ministry of Land, Infrastructure and Transport said in a statement.