Our expert freight forwarders will help you determine the best option for your shipping needs based on the size and weight of your load and delivery service:

Best for loading up to 20m³ and over 500kg (approx), your cargo is combined with other cargo in one container, which means you don't have to wait to fill a container. However, LCLs usually take 5-7 more days to arrive at the port of delivery, and they tend to be processed more frequently due to unpacking/LCL requirements.

Your shipment will be shipped in 20 or 40 foot standard containers.

Shipping costs are also affected by your choice of door-to-door, port-to-door, door-to-port or port-to-port delivery service.

Many other factors will affect your final cost and delivery time, including duties and duties, insurance, etc., but the biggest factor is the origin and destination of the shipment, which will determine the port of loading and unloading. STU Supply Chain provides shipping services from major seaports in China to USA.

China's dominance of the global port sector is indicative of their recent economic success. Seven of the 10 busiest ports in the world are in China. 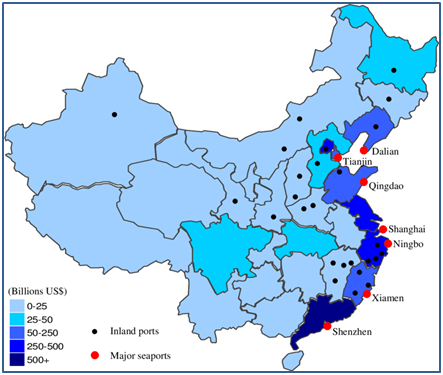 Other ports of origin served in China for Shipments to USA (with Port Codes):

Cargo ships remain the most reliable way of transporting goods both nationally and internationally. They also play a large role in the United States economy as well as the global economy.

Thanks to its booming port industry, the US also happens to be home to the seventh biggest trade economy in the world, with some of the largest ports accounting for 89.9 percent of all global imports and exports. 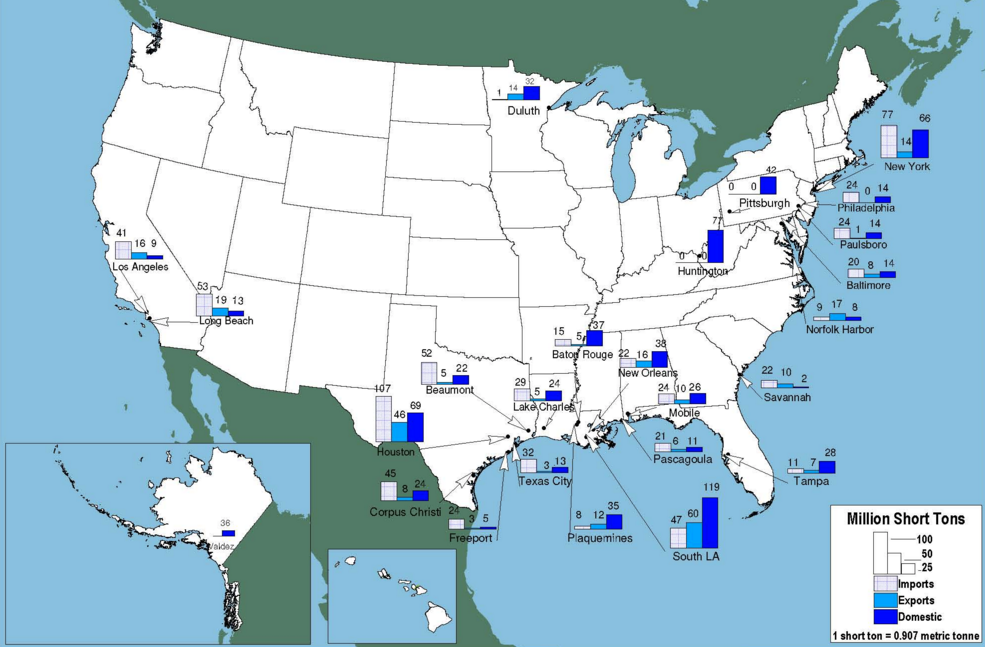 The Port of Los Angeles is the largest container port in the United States by volume and value. 20% of cargo enters the United States from this port. Eight container terminals are served by Union Pacific Railroad and BNSF Railroad. Along with the neighboring Port of Long Beach, it represents the main point of arrival for imports from China, Japan, Vietnam and Taiwan. The port has the most extensive terminal rail facility in the country and continuous intermodal access to 14 of the largest freight centers in the United States. It provides a digital information platform that provides supply chain employees with superior line-of-sight planning opportunities for the most efficient freight shipments. More businesses import goods through Los Angeles than any other seaport in the United States.

This West Coast seaport is not far from the Port of Los Angeles, and both parties can share infrastructure advantages, such as transportation links. After Los Angeles, Long Beach is the second busiest container seaport in the United States. It receives most of its cargo from China and other Asian countries and is the port of choice for most freight forwarders importing into the U.S., especially for deliveries in the western part of the country. It has the automated Long Beach Container Terminal, one of the most technologically advanced port facilities in the U.S., that speeds turnaround times at the port by separating ships from street traffic.

The Port of Long Beach is one of the few seaports in the United States that can accommodate the world's largest mega-ships. It is administered by the Port Authority. The city of Long Beach is the general owner, and the wharf is independently owned.

The Port of Savannah is located on the Savannah River, 29 kilometers upstream from the east coast of the United States. It has the largest container terminal in North America. Carriers crossing the Pacific Ocean from China must pass through the Panama Canal and sail along the east coast of the United States. They then took a short trip to the port along the Savannah River. This is still the best option for shipping from China to the east or even the Midwest of the country.

Savannah has grown from a port attracting big-box retailers to become the third-largest port to one that leverages new commercial e-commerce while still catering to traditional imports from China.

The Port of Seattle is the busiest container port in the Pacific Northwest of the United States. It is the most convenient location for importing into this part of the country from China and other parts of the Pacific Rim. In 2015, it formed the Northwest Seaport Alliance with the Port of Tacoma to leverage the effort for marketing and other financial purposes and to modernize the facilities at the port and container terminal. This established the third largest freight gateway in the United States. They are upgrading the port's Terminal 5 to be able to handle large ships to and from the trans-Pacific trade. Container capacity will also increase and the port will be able to berth two 18,000 TEU class ships simultaneously, which will greatly increase trade opportunities from China to the US.

The Port of Miami is the closest U.S. deepwater container port to the Panama Canal. Carriers from China must cross the Pacific Ocean and then travel through the Panama Canal to Miami, Florida. Despite relatively long transit times, it remains one of the busiest freight hubs in the U.S., serving as a staging point for goods from the port to the southeastern states of the country.

The port is undergoing extensive infrastructure improvements. It is deepening its main port channel to allow larger ships to reach the east coast via the soon-to-be-widened Panama Canal. The Port of Miami also established a new terminal intermodal rail service. These improvements will increase Miami's connectivity to Asia and Europe, and improve service to the Caribbean and Latin American markets. According to the Port of Miami Authority, nearly half of Miami's TEU imports come from, while most exports go to Latin America. The port is managed by Miami-Dade County and has several owners.

Other U.S. Ports of Arrival

Shipping from Shenzhen China to USA

We will take away the sleepless nights caused by worrying about customs requirements and regulations. We offer international shipping guides that include all important shipping information.

When you make a reservation using our platform to forward your shipment, you can rest assured that we will ask you to provide all relevant information so that we can clear your shipment through customs.

We'll let you know ahead of time what to expect in terms of delays and charges so you can plan accordingly. We'll make sure you get the best advice on the specifics of your shipment.

STU Supply Chain will work with you and your shipment from inquiry, booking, to collection and final delivery of your shipment. Simplify your shipping experience from China to the US.

Reliable imports from China are critical to American commerce at every level. As a leading freight forwarder in China, STU Supply Chain has responded to this demand with an efficient and reliable end-to-end service; including quotes, easy booking and payment, tracking options, and access to a range of global logistics resources.

1. As an NVOCC licensed and FMC licensed.
2. Competitive Rate Contracts with top Carriers.
3. Strong networks in China, we have offices in main ports: Shenzhen/ Guangzhou/Shantou.
4. Strong networks in U.S:  We have signed contract rates with carriers such as MSK, MSC, CMA, EMC, ONE, HMM, ZIM and WAN HAI. These relationships let us provide you with very good freight rates when shipping from China to any port in the United States.

5. Ability to file AMS and ISF by own system.
6. Built warehouses both in China and U.S which is experienced in Amazon FBA shipments handling.

The size, type and urgency of your shipment - STU Supply Chain handles it for you! We have the right solution to transport your cargo from Shenzhen to USA.