In the summer of 2022, the whole of Europe set a record high temperature, and the rivers of the European continent are constantly being evaporated. Due to falling water levels, some key sections of the Rhine are expected to be unnavigable from August 12.

It is worth noting that the European region is already on the brink of recession due to the exacerbation of inflation by the energy crisis, and the Rhine River will be cut off again, which may further tighten the current situation in Europe.

The Rhine is a vital waterway in Europe, and the extremely low water levels on its critical reaches have led major barge operators to impose cargo loading restrictions and low-water surcharges on Rhine barges.

The Rhine River is very important to the European economy. It connects Germany, Switzerland and Europe's largest seaport, Rotterdam, the Netherlands.

While low tides are a seasonal issue during dry summer months, the recent restrictions on freight traffic have come at a particularly untimely time. 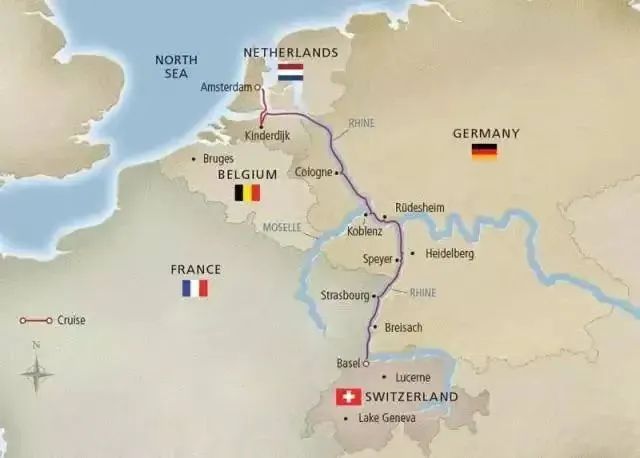 German officials said that the water level of the Rhine River has dropped to a dangerously low point, and shipping on the river may stop for a few days.

The Rhine, which has long been the backbone of the German, Dutch and Swiss economies, has now dried up to critical water levels, making it nearly impassable for ships and hindering the flow of bulk cargoes such as diesel and coal. In addition, the Danube has also dropped water levels due to high temperatures, hindering grain and other trade. Half of Ukraine's agricultural products are exported through Danube ports.

Germany, as the "hardest hit area" of the European energy crisis, has announced the resumption of coal power generation. Affected by the high temperature, the logistics chain of coal originally transported through the Rhine River has also been hindered, aggravating the energy crisis caused by the reduction of Gazprom supply. Germany's Scholz government is concerned that the shipping chaos could derail plans to restart coal plants, people familiar with the matter said.

Disrupting trade and transportation is just one of the effects of drying up rivers. In addition, because the river temperature is too high to effectively cool the nuclear power reactors, many nuclear power plants in France have been forced to reduce production or even shut down, exacerbating the power crisis.

The problem now is that the European region is already on the brink of recession as the energy crisis fuels inflation. Just four years after the historic sailing off the Rhine in 2018, the Rhine is facing another cutoff, further straining the current situation in Europe. Continental Europe's rivers and canals contribute about $80 billion a year to the region's economy as a mode of transport alone, along with other benefits from industries such as irrigation, according to Eurostat. So the consequences of waterways drying up will be more serious.

Albert Jan Swart, a transport economist at ABN Amro, expects the current severe weather to weigh on the entire region's economy, and the damage will far exceed the 5 billion euros ($5.1 billion) loss caused by the 2018 disruption of the Rhine.

Jan Swart said, “Once there is little rainfall in the region, its shipping capacity will be severely limited... You will also see damage from the super high electricity prices in Germany, possibly billions of euros.”

Barge operator Contargo is understood to have implemented €589 ($601)/TEU and €775 ($792)/FEU, as water levels are expected to drop below 50cm in the upper reaches of the Kaub reach in Cologne, Germany in the next few days. Low water surcharge.

Water levels in other important reaches of the Rhine are also expected to drop below the "tipping point". Due to the government's imposition of draught restrictions on the Duisburg-Ruhrort and Emmerich reaches and the expected drop to low water levels (possibly down to 151cm and 11cm respectively), Contargo is levying a surcharge of 85 to 303 euros per 20-foot container, for each There is a surcharge of 150 to 393 euros for a 40-foot container, depending on the water depth. Hanja Maria Richter, a spokesman for shipping company Hapag-Lloyd, told JOC on Friday that ships on the Rhine could only carry 50% of their capacity, affecting the company's inland logistics services.

Long-term low water levels on some stretches of the Rhine limit barge loading capacity, as more ships are needed to transport the same amount of cargo as water levels drop.

Contargo noted: “Costs have risen substantially as it becomes necessary to charter additional vessels in addition to the limited vessel capacity usually available, which becomes higher as water levels drop and the market tightens. To cover these additional costs, After the water level drops to a certain value, we need to implement a low water surcharge."

“Available capacity on the Rhine is already low because ships are transporting coal and other bulk commodities for Ukraine in bulk,” Richter said, adding that Europe’s inland industrial regions rely heavily on the Rhine and Hapag-Lloyd had to look for alternatives Transport solutions to move goods upstream by train or road.

“But everyone is asking for more space on road and rail, which means less capacity is available and prices are going to be higher,” Richter added. Another option for Hapag-Lloyd is to reroute cargo through northern ports such as Hamburg or Bremerhaven that do not depend on the Rhine.

Due to the limited loading capacity of barges in shallow waters, the container terminal at the Port of Antwerp-Bruges allows barge services to and from the Rhine to operate with less than 20 containers. A spokesman for the port said rail operators were also increasing the frequency of services and using longer trains. DB Schenker also pointed out that "particularly low water levels" on the Rhine limit the capacity available on the Rhine, and forwarders have booked additional capacity with road and rail operators.

The German Federal Institute for Hydrology expects the Rhine to experience prolonged periods of low water levels in the future due to melting glaciers and reduced snowfall due to climate change.

This is a big problem for manufacturers. Due to the limited capacity of the Rhine, shipping options for manufacturers are limited, as raw materials include dangerous goods that cannot be easily transferred from barges to rail or road, while other goods must be transported in large bulk carriers.