The ports of Tacoma and Seattle in Washington state, which had been rivals for much of the 20th century, proposed in 2014 to merge their ocean freight operations due to increased threats from British Columbia and other ports. A public development agency, the Northwest Seaport Alliance, was established in 2015 and approved by the Federal Maritime Commission. The combined port authority is the third largest cargo port in the United States and by container volume. 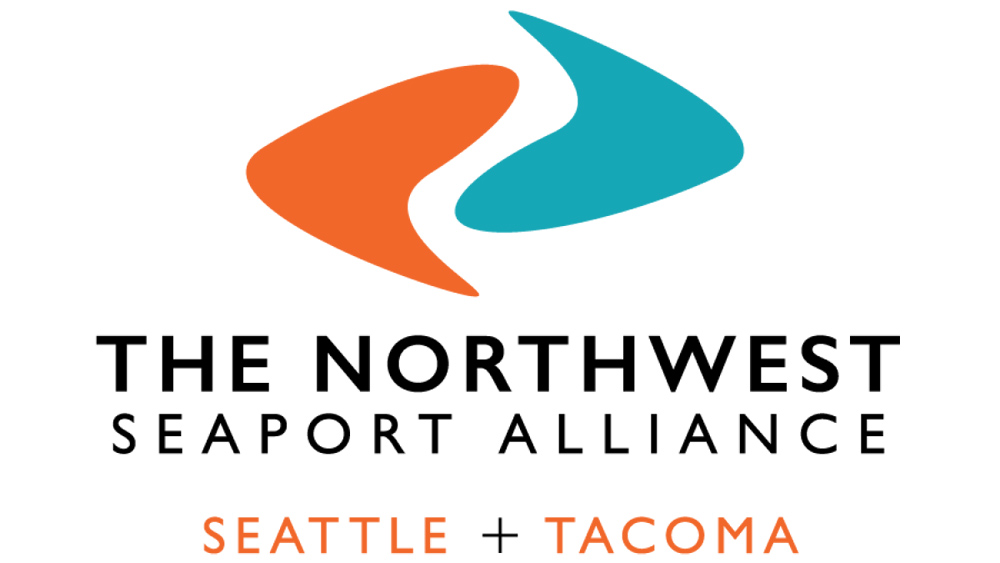 Located in the Puget Sound in the western part of Washington State in the northwestern United States, it is a natural harbor. It is the main starting and ending point of the North Pacific route and an important gateway to the Far East and Alaska. Industrially developed, it is the headquarters of the famous American aircraft giant "Boeing".

The Port of Seattle covers 624 hectares of waterfront and adjacent properties supporting container and general-purpose cargo terminals. A foreign trade zone, and storage of bulk and refrigerated cargoes. Seattle's natural deep-water port has more than 500 acres of marina facilities. 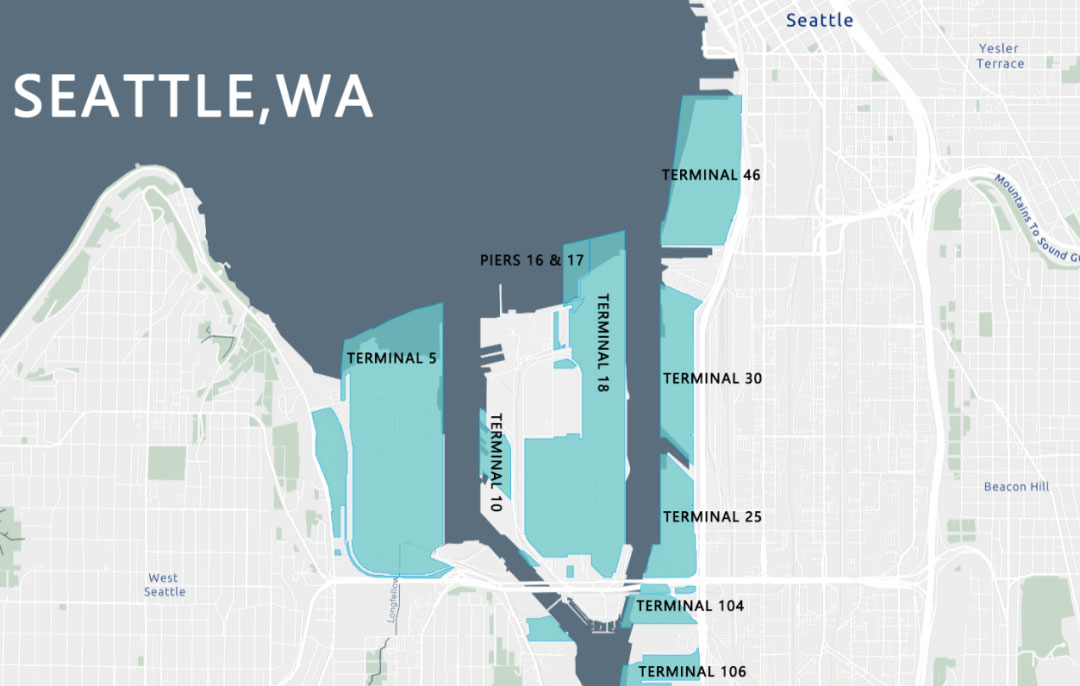 The 4 major terminals at the Port of Seattle:

· Terminal 5 is operated by Eagle Marine Services and provides fast and efficient transportation of goods by Pier Rail. There are three berths with 600 refrigerated plugs and are equipped with 6 rear Panamanian container handling cranes. The terminal intermodal yard has 6 rail tracks and an equal amount of storage space in the adjacent warehouse facility. The gate has a total of 12 lanes. There is a 1.8 acre covered transport shed for truck access and a 1.1 acre on-site maintenance and repair facility. The Port of Seattle's Terminal 5 is served by an integrated real-time computer system to efficiently manage rail and gate operations and terminal operations. It is equipped with automatic device recognition and a global positioning system.

· Terminal 18 is operated by SSA Marine and has four berths. There are 1227 refrigerated plugs. Equipped with 10 container handling cranes. The loading capacity of the terminal intermodal yard is equivalent to two full trains. There is a 2.2-acre covered shipping shed and a 2,782-square-meter (30,000-square-foot) container and chassis repair facility at Terminal 18 in the Port of Seattle. The terminal has an integrated real-time computer system that monitors vessel, gate and track operations and supports efficient terminal operations.

· Terminal 30 is operated by SSA Marine and has two non-adjacent berths with quick access to the BNSF and UP near-dock rail facilities less than two miles away. There are 451 refrigerated plugs. It is equipped with Super Rear Panama Crane and 3 units. Provides reefer and chassis maintenance and repair services, as well as reefer cleaning and cleaning services. The terminal has an integrated real-time computer system that monitors vessel, gate and rail operations, facilitating efficient terminal management. The terminals are near Interstates 90, 5 and 509.

· Terminal 46 is operated by Total Terminals International (TTI) and has two working berths and one available berth. There are 426 reefer plugs. Equipped with 5 container handling cranes, the terminal intermodal yard can load two whole trains. The gate has 17 lanes and dedicated inbound and outbound lanes for intermodal connections to the near terminal BNSF and UP rail yards.

The Port of Seattle also has two terminals dedicated to bulk cargoes and a grain terminal:

The Port of Seattle's Foreign Trade Zone (FTZ) #5 offers tax and processing fee advantages. The weekly inbound process allows goods to be shipped 24 hours a day, with an 85% reduction in processing and inbound fees. Duty relief is available for goods assembled or processed in the Port of Seattle Free Trade Zone. Port maintenance tax can be extended. Imported goods held in a bonded area for sale, storage, assembly, repackaging, display, sorting and grading, mixing or processing are exempt from state and local ad valorem taxes.

The Port of Tacoma is located at the southern end of the Puget Sound in Washington State in the northwestern United States, about 50 kilometers south of Seattle. The port of entry and exit is transferred to the Juan de Fuca Strait via Git Xia Bay, and the sea connection with the outer port is 25 nautical miles longer than that of Seattle. The internal traffic is roughly the same as that of Seattle, and it is also one of the west bridgeheads of the North American Continental Bridge. 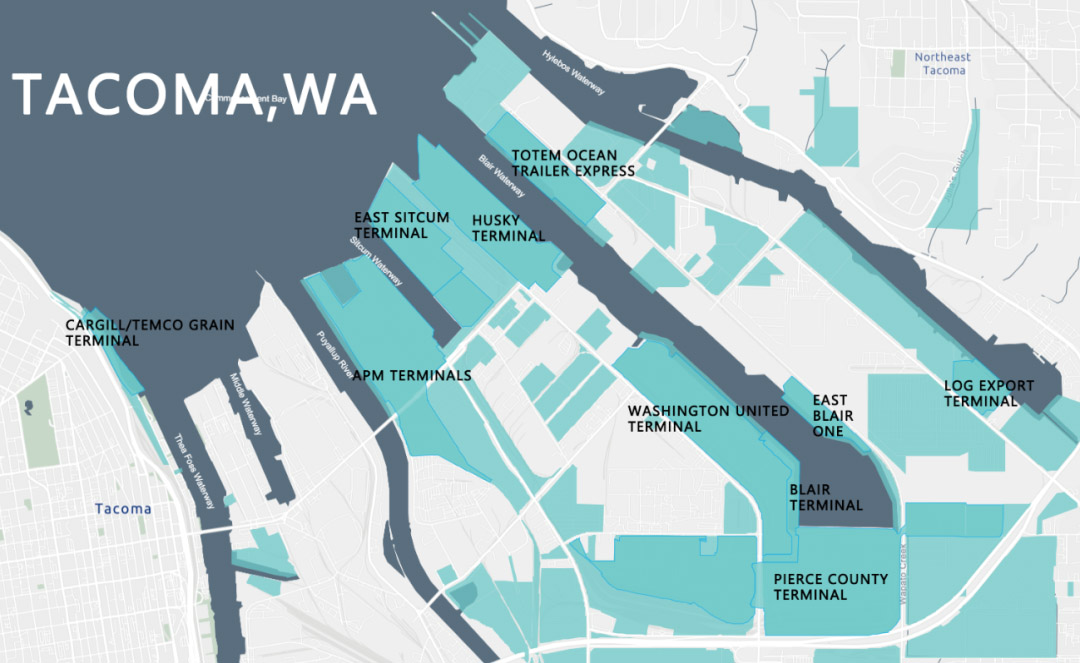 The 6 major terminals at the Port of Tacoma:

· The Olympic Container Terminal (OCT) terminal operated by Yang Ming Marine, OCT is equipped with three 14-container lifting equipment and one 13-container lifting equipment. The gate has five inbound lanes. There is a terminal access to the North Intermodal Yard. Less than 5 kilometers (3 miles) from I-5, SR-509 and US-99, and less than 48 kilometers (30 miles) from I-90 via I-5 and SR-18.

· Pierce County Terminal, operated by the Evergreen Group, has two berths and is equipped with seven container cranes that can hold 23 containers. The gate has 10 inbound lanes and the terminal has access to the PCT intermodal yard served by BNSF railroads. Pierce County Pier in the Port of Tacoma is less than 1.6 km (1 mile) from I-5, SR-509 and US-99. It is less than 48 kilometers (30 miles) from I-90 via I-5 and SR-18.

· Washington United Terminal (WUT), two berths, the terminal is equipped with 390 reefer plugs and 6 container cranes (4 for 18 containers, 2 for 24 containers, up to 100 tons). The truck doors at Washington Union Terminal have nine oversized pit lanes. WUT has a modern intermodal yard on the terminal, served by BNSF and the Union Pacific Railroad. WUT is less than 1.6 km (1 mile) from I-5, SR-509 and US-99. It is less than 48 kilometers (30 miles) from I-90 via I-5 and SR-18.

· Husky Terminal, two berths, equipped with 4 container cranes, 7 inbound lanes, with access to the northern intermodal yard, served by BNSF and Union Pacific Railroad. The Husky Pier in the Port of Tacoma is less than 5 kilometers (3 miles) from I-5, SR-509 and US-99. It is also within 48 kilometers (30 miles) of I-90 via I-5 and SR-18.

The Port of Tacoma has been a port of entry for the automotive industry for more than 30 years, and the port terminal's truck yard can accommodate more than 1,500 vehicles at a time, with 72 car racks available for rail loading. The Tacoma Railroad Shoreline connects the Marshall Avenue automotive facility to BNSF and the Union Pacific Railroad.

The Port of Tacoma has four intermodal rail yards. These rail yards are served by BNSF and Union Pacific Railroad, and the Tacoma Railroad Conversion and Terminal Rail Services connect the terminals and terminals to the National Railroad.

There are 40 transshipment warehouses and distribution centers within a 20-minute drive of the Port of Tacoma terminal. These facilities offer a range of logistics services, facility features and specialized equipment that give the Port of Tacoma a competitive advantage. There are two U.S. Customs checkpoints and many facilities at the Port of Tacoma, with on-site inspections by the USDA and the Food and Drug Administration.