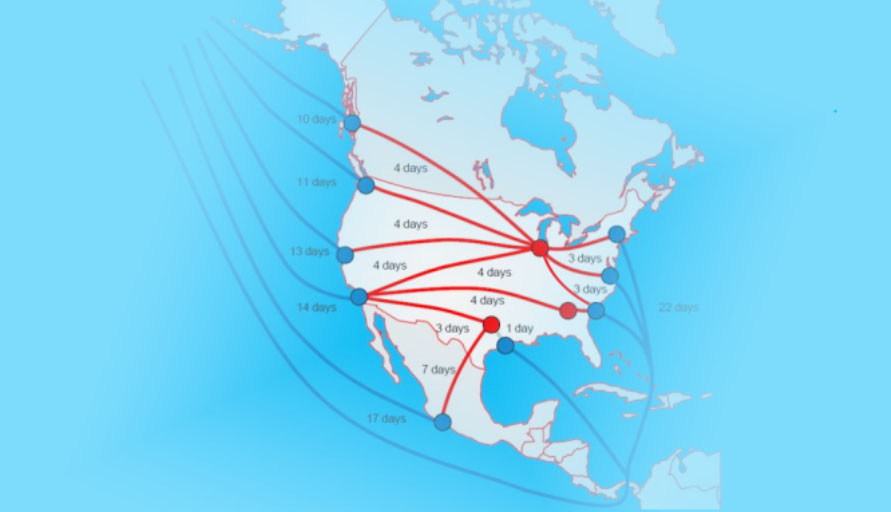 In the past two years, when port congestion occurred on the west coast of the United States, most of the goods flowed to east coast ports such as Savannah. Currently, the Port of Savannah has 18 routes to Asia, 16 of which pass through the Panama Canal and 2 through the Suez Canal.

The Port of Savannah is operated by the Georgia Port Authority (GPA) and competes primarily with the ports of Charleston, Charleston and Jacksonville in northeastern South Carolina, and Jacksonville in southern Florida. GPA operates another Atlantic seaport in Georgia, the Port of Brunswick in Brunswick, Georgia. There are three inland ports connected to the Gulf of Mexico, Bainbridge and Columbus, and one in Cordler, Georgia, connected by rail to the Port of Savannah.

The port is about 15 nautical miles away from the estuary, and the water depth of the entry channel is about 11 meters. 111 nautical miles to the northeast to the Port of Charleston and 150 nautical miles to the southwest to the Port of Jacksonville. The port area starts from Fort Jackson, where the lower Savannah River and the Buck River meet, and extends northwestward for about 9 nautical miles along the river. There are more than 50 piers along the banks, most of which are located on the right bank of the river. The public piers managed by the Port Authority include: There are 19 general cargo berths, 6 container berths, and 2 oil and dry bulk berths, which are mainly distributed in the downstream ocean dock area and the upstream garden city dock area.

Owned and operated by the Georgia Port Authority, Garden City Terminal is a purpose-built container terminal, the largest of its kind on the Atlantic and Gulf coasts of the United States. 1200 acre (5 sq km) single terminal facility with 9693 ft (2955 m) continuous berth. The terminal is equipped with 15 high-speed container cranes (4 SuperPost-panamax and 11 Post-panamax), as well as a large number of yard handling equipment. The Port of Savannah terminal has direct rail and road connections and ample space for future development.

Heineken USA opened a distribution center in February 2008 that will handle 4,000 containers a year, moving from the brewery in the Netherlands to dealers in Georgia, South Carolina, North Carolina, Tennessee, Kentucky and Alabama. There are 7 million cases of Heineken and Amstel branded beverages every year.

A railroad connecting terminal facilities to the Geneva and Wyoming Railroad.

Maersk: Maersk calls at the Ocean Terminal, which has a dedicated bulk facility, which is designed to quickly and efficiently handle large quantities of forest and solid wood products, steel, etc.; the truck is only 2 kilometers from the terminal to Interstate 516, and the surrounding transportation is convenient and can be Get to your destination quickly.

◈ Note: The warehouse is understaffed, so the efficiency is relatively low.

◈ Note: When the peak season is approaching, the reservation time is slow, the unloading time is slow, and it is easy to explode the warehouse.

The Garden City Terminal in the Port of Savannah is strategically located to provide reliable and efficient intermodal access to markets throughout the Midwest and Southeast United States.

Garden City Terminal in Savannah is served by two Class I rail services: Norfolk Southern Railroad and CSX Transit. The Intermodal Container Transfer Facility provides unrestricted double-deck shipping for two to three days to major markets in the Southeast, Gulf Coast and Midwest, and overnight delivery to Atlanta. The Garden City Pier provides direct access to two major interstates (I-95 North-South and I-16 East-West) in the Port of Savannah.