Today (Monday) it was confirmed that the terminal has reopened and all gates are busy. 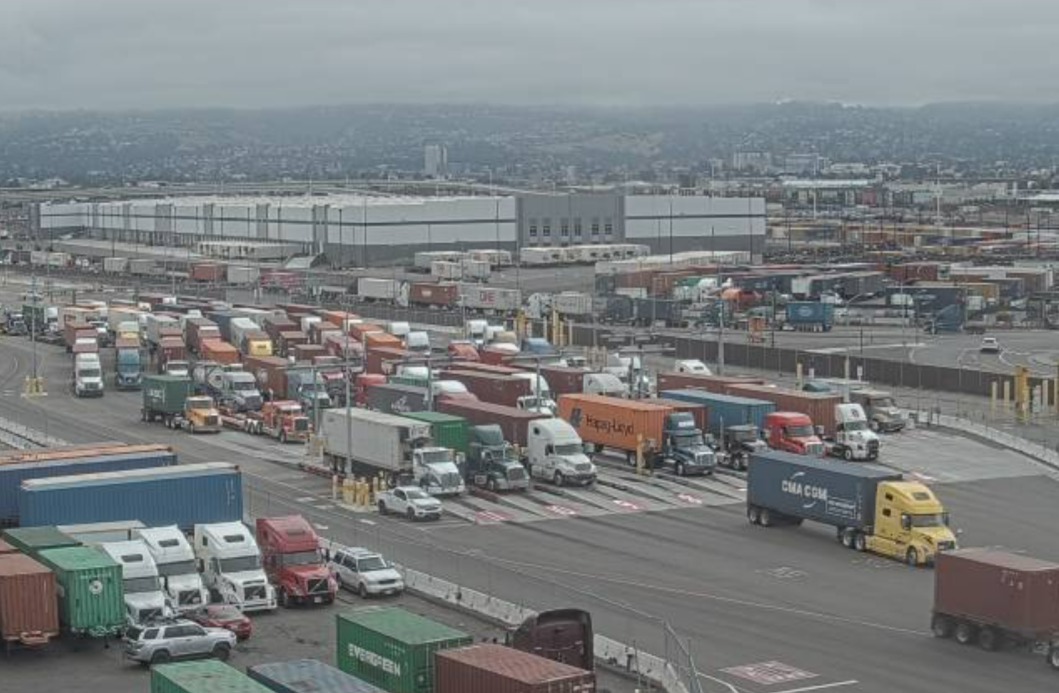 This is the east and west gates of OICT, equally busy. 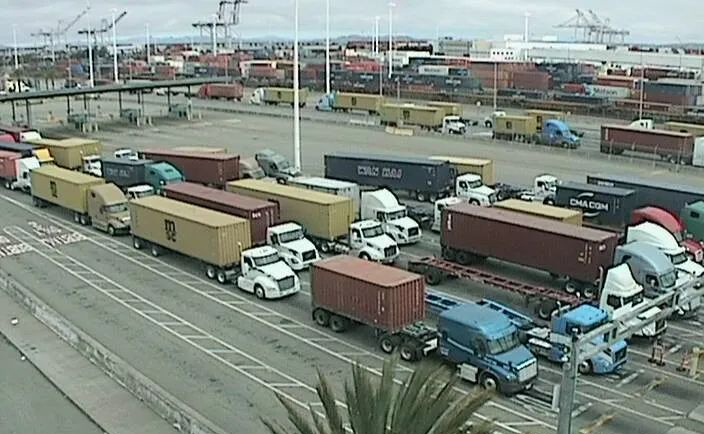 The week-long trucker's strike blocking the gates finally came to an end.

I still want to share with you what I learned around this trucker's strike.

There were dozens of cars stuck on the road outside Matson Terminal, probably dozens of truckers gathered together, the scene was peaceful, no one shouted loudly. On closer inspection, there were street stalls on the side of the road, and a few of the older truckers were having lunch! The camera shake represents the inner fear: a big brother eating a glance in this direction, scared immediately put down the phone lens.

The following is the situation after communication with multiple parties.

The reason for the strike is known to all: truckers oppose AB5 (What is AB5 law? Are California towing rates going up?) The truckers are demanding to talk to the Governor of California to enact an exemption to AB5 for the towing industry. By Friday, the governor's office's attitude was that we have measures in place to help truckers comply, meaning that AB5 is already in effect, just deal with it, and withdrawal is out of the question. The Oakland Port Authority called a meeting of several hundred truckers last Thursday to discuss the impact of AB5 on truckers and what to do about it.

In fact, after learning about the situation, I learned that there is another reason that triggered the truckers' strike. About 10 years ago, the California Air Resources Board (CARB) passed truck and bus regulations that will ban trailers with engines equipped with pre-2009 emission standards starting in 2023. California, with its high levels of air pollution, especially in port cities, introduced stringent vehicle emissions requirements many years ago.

The problem is, to buy a new car or electric trailer that meets the standards, it often costs more than $100,000, and many truckers cannot get so much money.

OICT is the largest, accounting for 70% of the volume, while Trapac, Evergreen and Matson terminals are left. The strategy of the striking truckers was very clear, they wanted to block the biggest terminal, so OICT was hurt the most, the gates were closed for a week, and it was impossible to unload the ships, and the return of containers was suspended, which caused heavy losses. Other terminals were able to unload a small number of ships, but the problem will come soon, we will talk about it later.

Why would a trucker blocking the gate affect the unloading of ships? Why can't the tow truckers get in and lift the containers?

Where are the police when things are going so badly?

Is there really nothing that can be done?

In fact, the terminal has already tolerated it. They sympathized with the truckers, but the gates were closed for a week, making it almost impossible to unload the ships and causing heavy economic losses. What's more, Oakland terminal's yard is the most serious blockage in the west of the United States, and it takes more than 2 weeks for the containers to enter the closed area after unloading. When the terminal is reopened, will there be room for newly unloaded containers in the yard? Although some terminals unloaded a few ships last week, I heard that the yard is already full (because it is also impossible to pick up the containers), and it is estimated that the terminal will not be able to unload ships when it reopens this week, so the waiting time for berthing will become longer again.

There are still solutions. Last week the terminal and the Port Authority had urgent discussions and coordinated with various law enforcement agencies, and the general direction was that the truckers could continue to strike, but could no longer affect the terminal's operations. Using the weekend, the terminal gates have been separated by iron horses, so truckers can protest within the allowed limits, but cannot block the road or block the access to the gates with their cars, or they will be ticketed. At the same time, the pier has also set aside an area at the gate, marked as a "free speach area", where truckers can speak freely. In short, truckers can continue to express their attitude, but the terminal must reopen. It is said that 80% of the striking truckers are tired and want to start working to earn money after a week of striking without income, but another 20% are determined and want to continue this week.

The already fragile supply chain can't afford any more strikes and disruptions. The Oakland terminal was hit with a week-long pause, and the negative impact has already been felt. When the terminal reopens this week, congestion will increase further: containers not picked up last week will have to be picked up this week, and it will take an estimated three weeks or more for newly unloaded containers to enter the closed area. There is no space in the dock yard (one dock has directly converted a small berth into a yard, and the containers are piled up to the sea), unloading ships cannot be unloaded, and the number of ships waiting to berth becomes larger and longer. After a lively protest, it seems that all logistics-related parties are victims, from the terminals, to the shipping companies, to the tow truckers, to the cargo owners.