Port of Los Angeles - Largest Port in the US

Los Angeles was originally an Indian pastoral village. In 1781 the Spanish colonists built a town here. It has been under the jurisdiction of Mexico since 1822, and belonged to the United States after the American-Mexican War in 1846. The city was established in 1850. The city gradually developed in the process of American immigration to the west. In the middle of the 19th century, after the "Gold Rush" in California, immigrants came here to engage in agricultural reclamation, and the trade of agricultural and livestock products became an important economic activity in the early days. Later, the construction of the East-West Railway, the development of nearby oil, the construction of artificial ports, the opening of the Panama Canal and the rise of the Hollywood film industry have all strongly promoted the development of the city. Since the Second World War, arms orders have stimulated the rise of modern industry, commerce, finance and tourism have prospered along with it, and immigration has increased sharply, making it an emerging megacity in the United States and the largest port on the western Pacific coast. 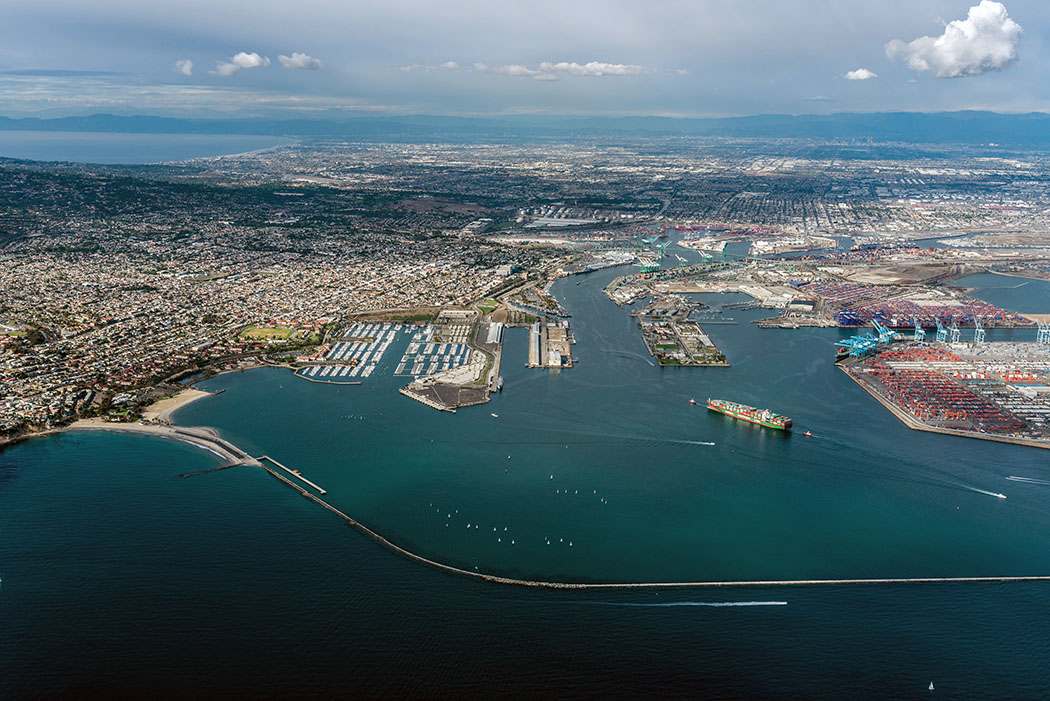 It is one of the continental bridgeheads in North America, the western bridgehead of the Santa Fe Railway, the main trunk line across the United States, and the bridgehead on the eastern Atlantic coast as PHILADEL PHIA. Another rail line is the Southern Pacific Railroad, which starts from Los Angeles and extends eastward through the Port of New Orleans to the Port of JACKSONVILLE on the Atlantic coast.

Los Angeles covers an area of about 1,291 square kilometers. The coordinates of the city center are 34°03′ north latitude and 118°15′ west longitude. The city has a population of about 3.976 million (2016). As of 2016, Los Angeles is divided into eight regions including Los Angeles County, Long Beach, and Riverside County. 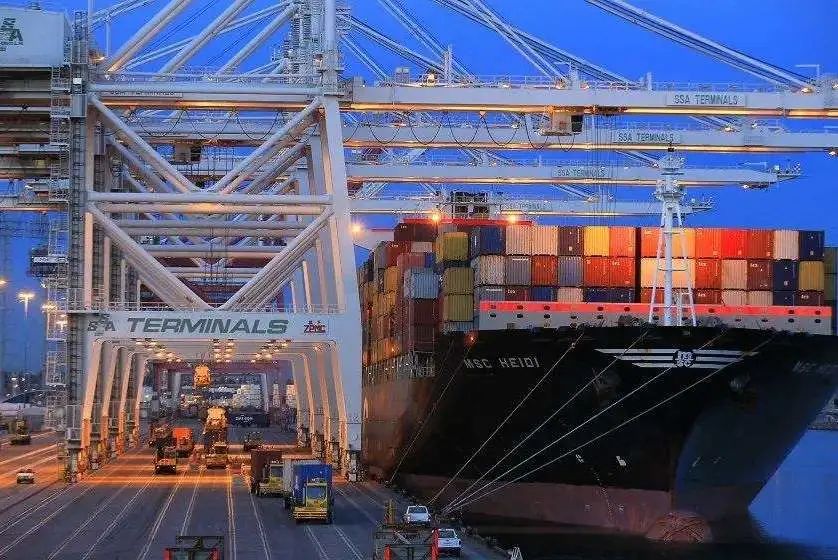 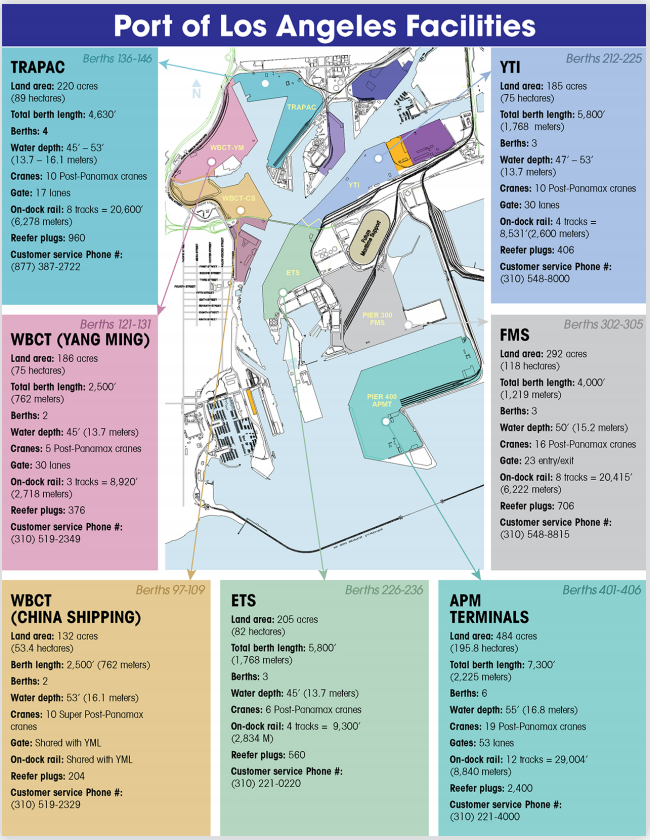 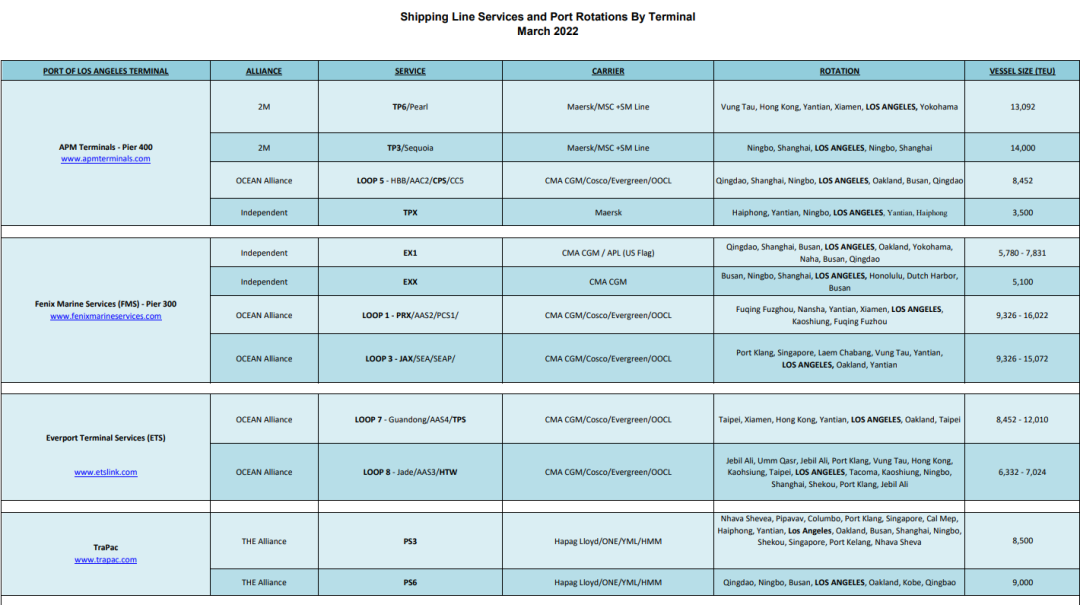 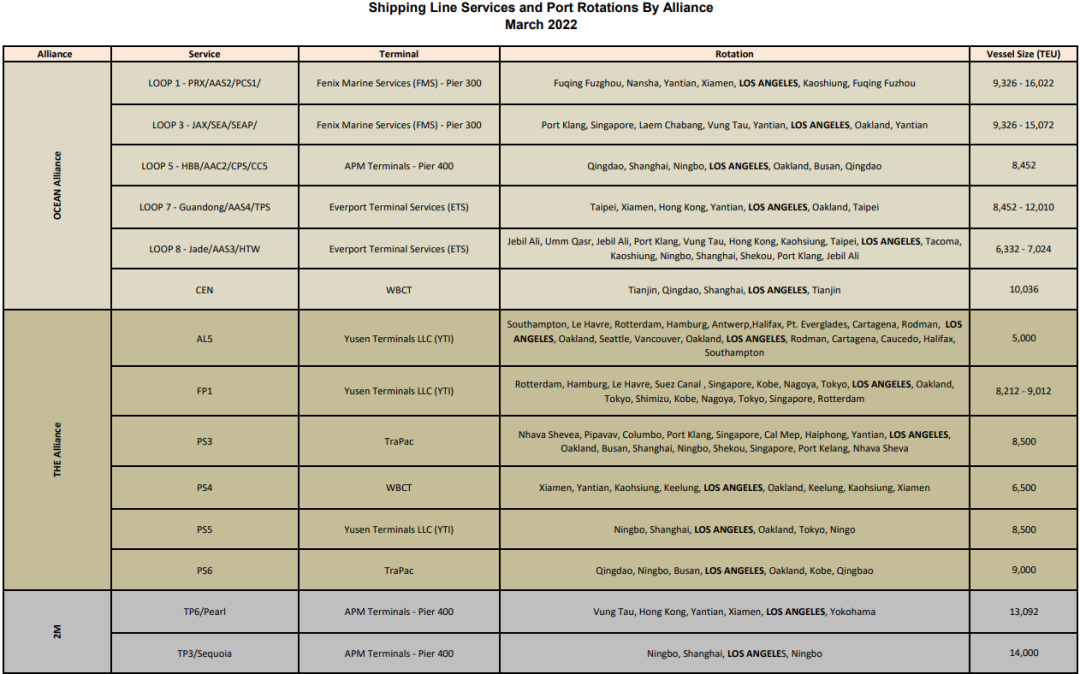 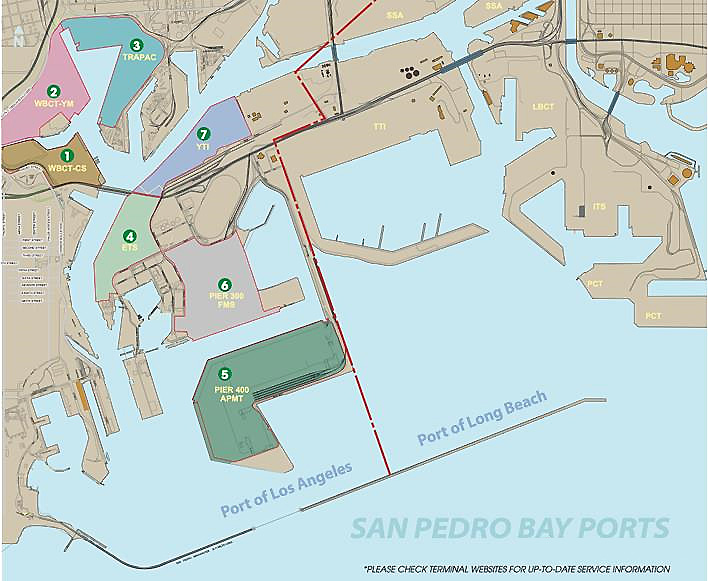 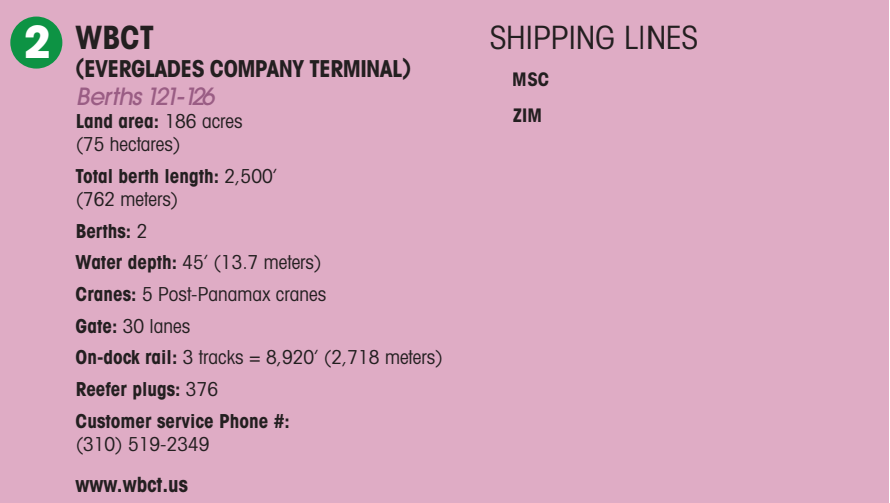 ③ is the TARPAC terminal (the EXX service of CMA is stopped, and the EX1 route of CMA will also be changed to this terminal) 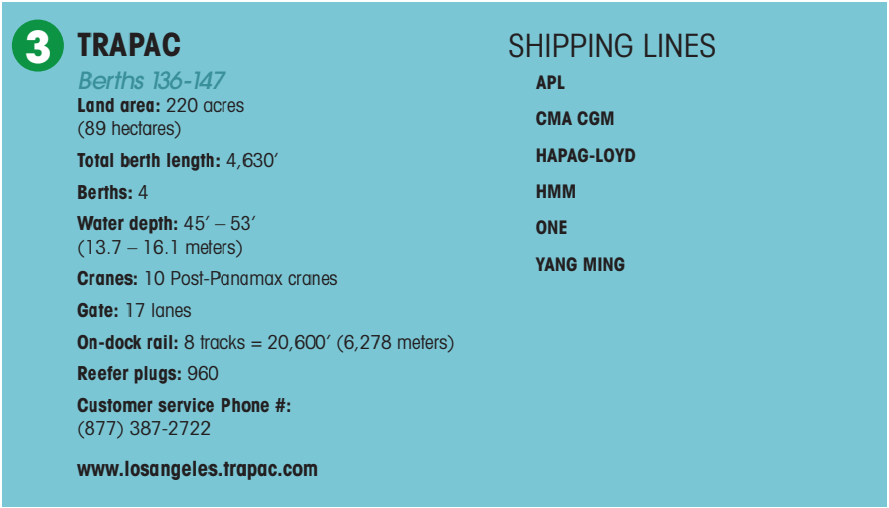 ④ is Everport Terminal Services, and the ETS terminal is Evergreen's own unique terminal (the HTW express line basically stops at this terminal) 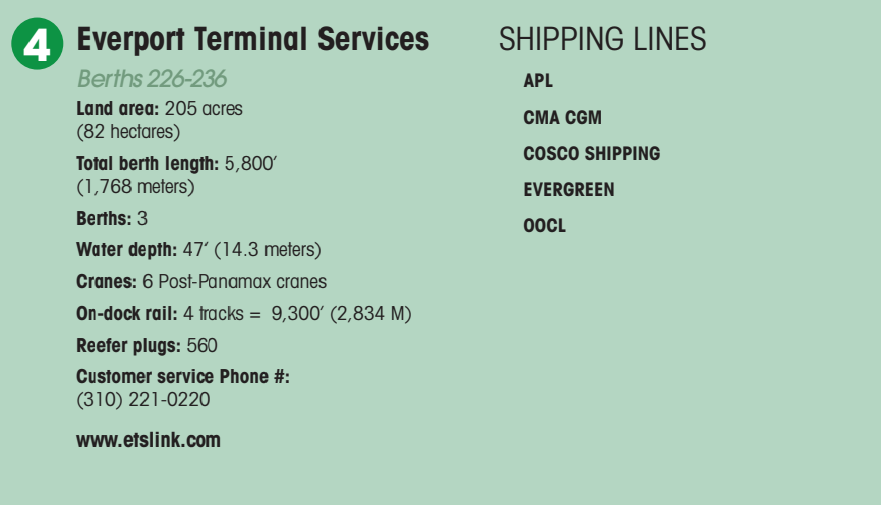 ⑤ is APM Terminals is the terminal of the 2M alliance 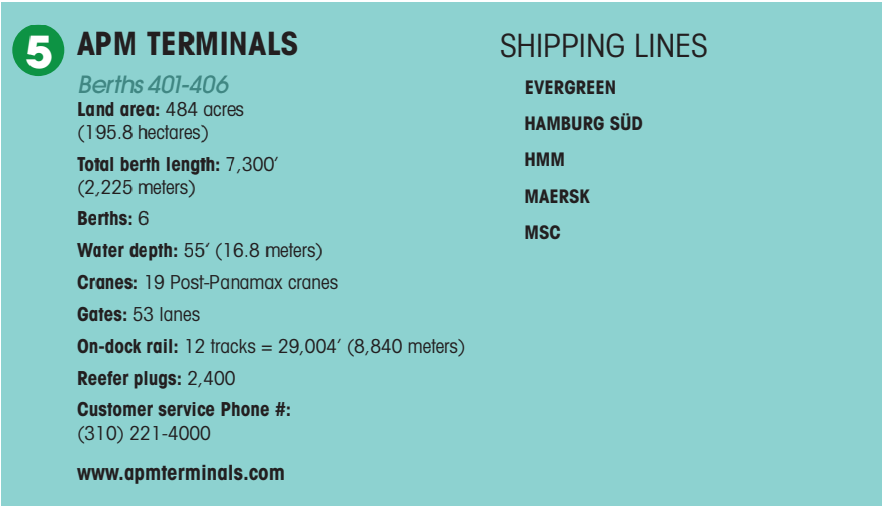 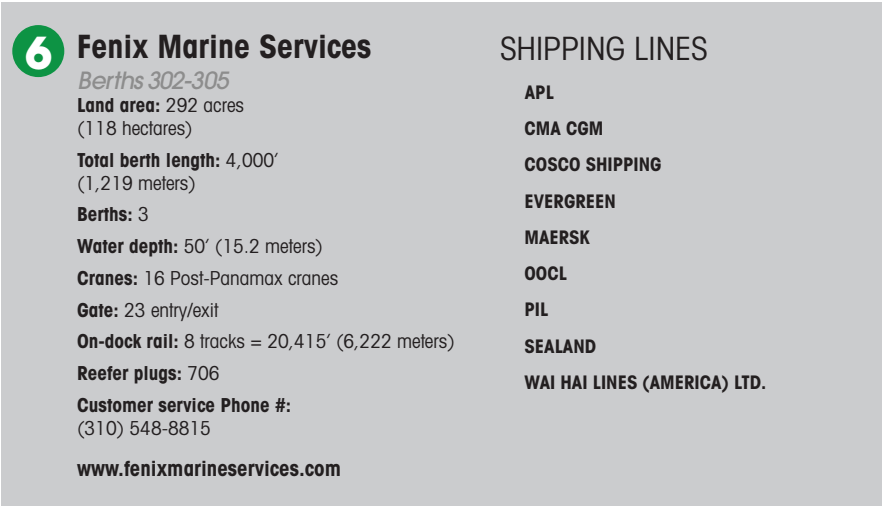 ⑦ is Yusen Terminals, YTI Terminal is the terminal of THE Alliance 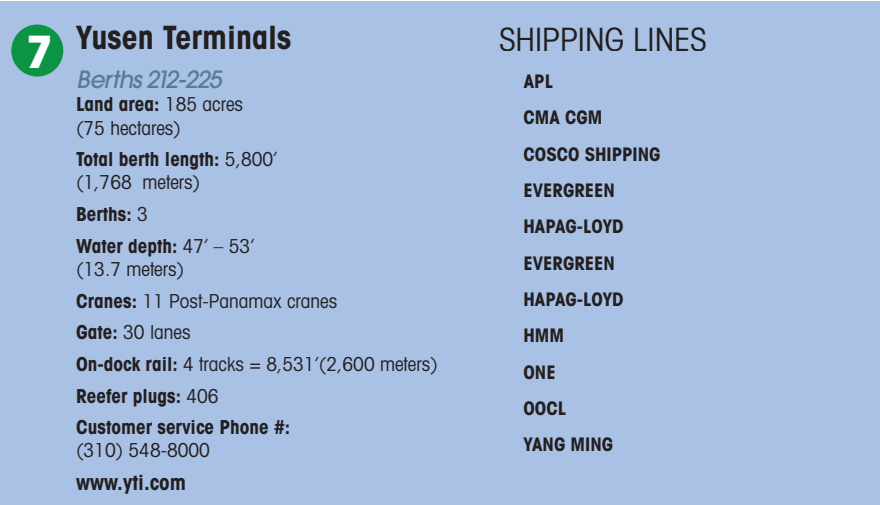 What is Peer Off?

Peel Off, previously a service available to large BCOs or NVOs. A new pilot project now launched at the Port of Los Angeles expands the use of "Peel Off" to small and medium importers and NVOCCs to help reduce terminal congestion.

The terminal uses "Peel Off" to de-stack containers from the same importer to the same location area, so their truck drivers can quickly go to the corresponding location to pick up the container directly, without having to spend hours rummaging through the boxes to find them, greatly Improve the efficiency of the suitcase.

This model has been piloted since 2014, and Peel Off has been a regular and increasingly popular service in LA and LB since 2015. It is an efficient tool to eliminate terminal congestion and simplify the trailer transportation experience. But it is limited by space and service larger BCO or NVO.

BENEFITS Faster trucks run faster, get to your next destination faster, no need to book a suitcase at Peel Off and enjoy Pier 400 Green Fast Track.

Benefits of Peel Off

Peel Off has been piloted since 2014. Peel Off has been a regular and increasingly popular service in LA and LB since 2015. It is an efficient tool to eliminate terminal congestion and simplify the trailer transportation experience. But it is limited by space and service larger BCO or NVO.

The benefit is that the truck runs faster and reaches the next destination faster. No reservations are required for pickup in Peel Off mode and you can enjoy the Pier 400 green fast lane.

Implementation of a new system developed by software service provider Trade Tech that aggregates shipment data electronically submitted to U.S. Customs and Border Protection to identify Peel Off opportunities. Trade Tech then shares this data with importers and NVOs whose containers will be separated from the main container stacks at the terminal.

Trade Tech said that through the collaboration of the platform integration arrangement, small and medium importers and NVOCCs will enjoy the same benefits under Peel Off that larger shippers have already experienced. In a Peel Off operation, the pre-approved truck driver goes directly to the designated container stack and the equipment operator "Peel Off" the container from the top of the stack and delivers it to the truck driver regardless of the container number, a process that can Truck driver turnaround time is halved.

1) STU Supply Chain can get space from Yantian, Ningbo and Xiamen to Vancouver at a very competitive price. If the west port of the United States is congested, it will be transferred to other ports in North America.

3) Customs entry will be at the Canada/US border

Get a California Motor Carrier Authorization, say getting your own MC/DOT number allows you to maintain your independence and expand your business. This will allow drivers to retain and grow their profits to a certain extent. Additionally, carriers can obtain brokerage authorizations so that they can continue to ship to owners/operators who previously chartered their fleet.

Leaving California, while AB5 restricts independent contractors from picking up goods in California, it does not restrict drivers from shipping goods from outside the state.

Being a company driver, while the independence and relative freedom of being a rental owner-operator is attractive, there are benefits to being an employee of a larger company: regular pay, benefits, and reliability also have their advantages.

Relocation, if unattractive, ends up with the option of moving business to a less restrictive state.

What impact does the AB5 have on the terminal?

Countless small businesses (such as those with 2-3 trucks) will soon be out of business or survive in other states, but other states do not have as much freight as California, because California and the West Coast carry 70% of the US freight; Then the supply of drivers is in short supply, which will lead to large companies such as UPS, FEDEX, Walmart, etc. At the same time, due to the severe shortage of drivers, the pressure on the port terminal to return the container to empty is even worse.

Is the Los Angeles container terminal available for buy and sell?

Los Angeles container terminal can be bought and sold, for example, in 2021 CMA CGM announced that it would acquire a 90% stake in Fenix Marine Services, a Los Angeles-based terminal port, in a deal worth about $2.3 billion. CMA CGM currently holds a 10% stake in FMS, and upon completion of the transaction, CMA CGM will become the sole owner of the FMS. FMS is the third largest terminal in the Los Angeles/Long Beach port area and one of the largest in North America, with a capacity of approximately 2.5 million TEUs. 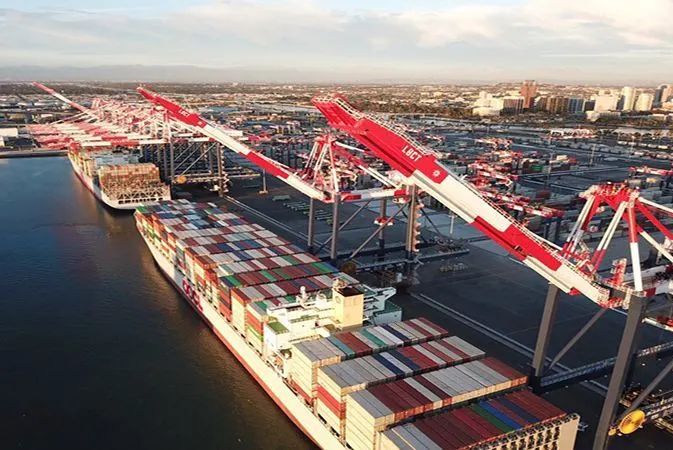 Los Angeles is the largest economic center in the western United States. It is one of the important industrial and commercial, international trade, science, education, entertainment and sports centers in the United States. It is also one of the main bases for the petrochemical, marine, aerospace and electronics industries in the United States. It accounts for 30% of the California labor market, the city's output value is about 1/3 of California's, and it accounts for more than 25% of California's retail and wholesale volume. The automobile industry, electronics industry, financial industry and tourism play an important role in its economy, and Los Angeles' largest automobile manufacturing plant is located here. Its high-tech products account for 60% of the country. Los Angeles has a large number of immigrants, and the arrival of new immigrants in large numbers has brought a lot of money and strengthened its position as the economic, commercial and financial center of the western United States. In 2016, Los Angeles' gross regional product was $753.1 billion, the second largest in the United States after New York. In 2016, Los Angeles' gross regional product was $753.1 billion.

Lockheed, one of the two largest aircraft manufacturing companies in the United States, is a monopoly of the aircraft and missile manufacturing and oil industries in the United States, located just north of the suburbs. The California oil field is just around the corner from Los Angeles. In addition, automobile manufacturing, electronic equipment, chemistry, steel, and printing all occupy a major position. Hollywood in the northwest is the center of the American film industry, and the Disneyland amusement center in the east is world-famous. The port is about 30km away from the airport, and there are regular flights to all over the world.

The major export/import cargo of the Port of Los Angeles