The Port of Hamburg (Hamburger Hafen, port code: DEHAM) is located on the right bank of the lower Elbe River in northern Germany, bordering the Hegelgoland Bay, and is the largest port in Germany and the second largest container port in Europe. It is also an important seaport, railway and aviation hub in Germany. As well as the center of Germany's shipbuilding industry, it is known as "Germany's gate to the world". 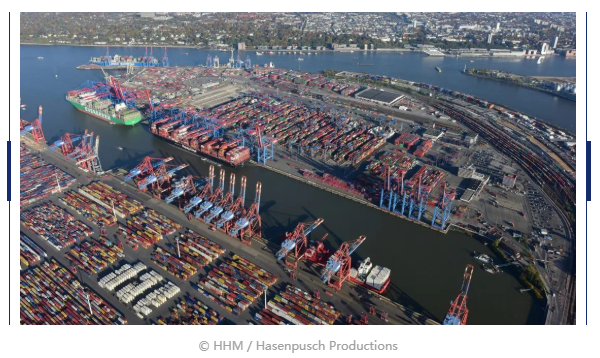 The Port of Hamburg operates about 7,500 shipping trips a year, has nearly 300 berths on the 43-kilometer long sea vessel quay, more than 1,300 freight trains per week, four modern container terminals, three cruise terminals and about 50 rolling stock. Professional loading and unloading facilities for bulk and bulk cargoes, transporting all types of bulk cargo, with around 7300 logistics companies in the urban area. 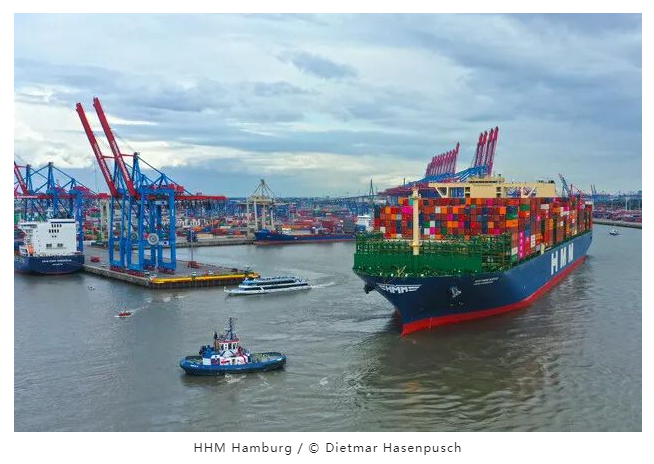 In the first half of 2022, the container throughput of the Port of Hamburg reached 4.4 million TEUs (TEU, 20-foot equivalent units), a slight increase of 0.9%, and it is the only major port among the major competing ports in Northern Europe to achieve positive container throughput growth.

The Port of Hamburg has a temperate maritime climate, with westerly winds throughout the year, mild and humid, and more winter rain. The annual average temperature is 4C in the lowest month and 20C in the highest in July. The average annual rainfall is about 800 ml. The average tidal range is 2.8m.

The open-air cargo yard on the port of Hamburg is 820,000 square meters, the cargo shed is 1.05 million square meters, the total oil depot is 3.8 million tons, and the granary capacity is 740,000 tons. Loading and unloading machinery and capabilities: loading and unloading equipment includes various shore cranes, bridge cranes, mobile cranes, grab cranes, truck cranes, floating cranes, suction lifts, conveyor belts, forklifts and ro-ro facilities, among which floating cranes are the largest The lifting capacity is 1200 tons. The efficiency of the suction lift for loading and unloading grain is 1300 tons per hour. In Europa Container Terminal, there is a super-Panamax container loading and unloading bridge with a load of 80 tons. The extension span of the boom is 48m outside the shore railway, and it can extend inward by 23.5m. When the lifting height is 31m, the lifting load is 68 tons.

What distinguishes the Port of Hamburg from other seaports is that it is located in the center of the European market, the European Community, the European Free Trade Association and the Economic and Trade Association, making it the most important transit seaport in Europe. The Port of Hamburg has more than 300 shipping routes and connections with major ports in the world. The port area has a "free port" covering an area of 16.2 square kilometers, mainly engaged in entrepot trade, and has now developed into the world's largest free port. The main container terminal operators in the Port of Hamburg are HHLA and Eurogate. 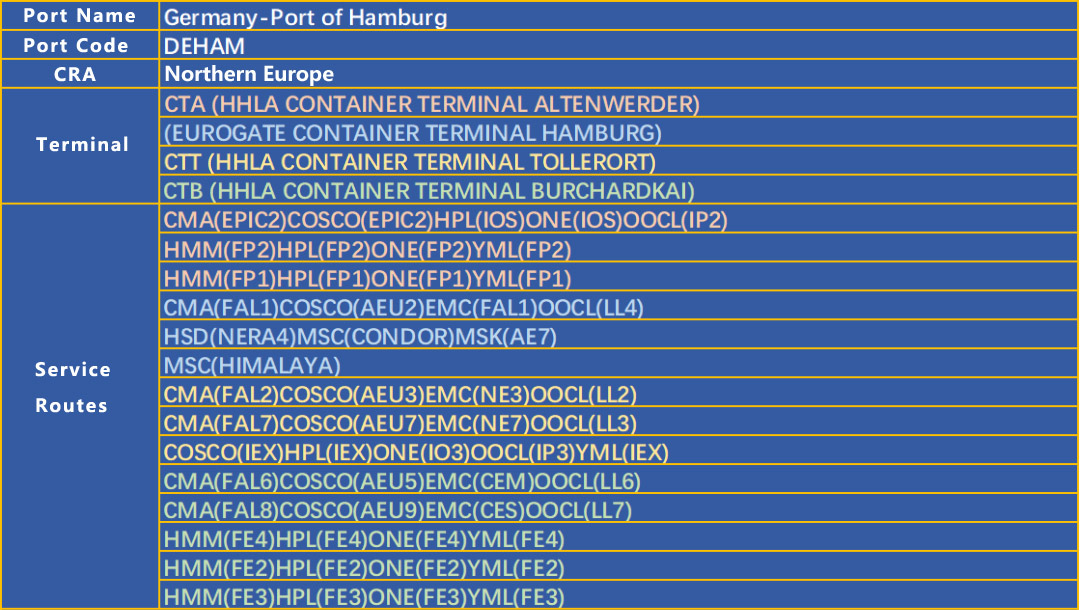 CTA (HHLA CONTAINER TERMINAL ALTENWERDER) is globally recognized as a state-of-the-art container terminal and the first in the world to be certified climate neutral. With its high degree of automation and compact layout, it lays a good foundation for future container handling. CTA's advanced technology and innovative electronic data processing system ensure efficient loading and unloading of large container ships. Since the terminal was put into use in 2002, the number of containers has shown a rapid growth trend. The CTA terminal is 1,400 meters long, covers an area of 1 million square meters, has a water depth of 15.1 meters, and has 4 berths in total. The terminal has 14 gantry cranes, 91 unmanned guided vehicles (AGV), and 26 automated yard blocks; in terms of railways: 9 rail tracks with a length of 720 meters, 4 rail-mounted gantry cranes and 2,200 refrigerated box connector. At the same time, CTA has the largest sea-rail intermodal transport station in Europe - KTH Terminal (Kombi-Transeuropa Terminal Hamburg).

The Eurogate container terminal is located in the southwest of the Port of Hamburg, near the A7 motorway. The wharf is 2,080 meters long, covers an area of 1.4 million square meters, and has a water depth of 15.3 meters. The terminal has 23 gantry cranes and 171 unmanned guided vehicles (AGV). Its close inland location helps shipping companies and freight forwarders save time on road or rail transit, and is low-carbon and environmentally friendly. The Eurokombi sea-rail intermodal station near the terminal provides a good inland connection to the Greater Hamburg region of Germany. For smooth and fast operation, the terminal is equipped with the most advanced container cranes and straddle carriers. As one of the most important transportation hubs in Northern Europe, the terminal provides good road, rail and feeder transportation to the economic centers of Scandinavia, Central and Eastern Europe and Russia.

The Eurogate terminal is planned to continue to expand a 1,059-meter-long area with an area of 380,000 square meters in the west direction (ie the direction of the Elbe/Bubendi-Ufer city). By then, the turning radius will increase from 480 meters to 600 meters, and the container handling capacity will increase from 4.1 million TEU to 6 million TEU.

CTT (HHLA CONTAINER TERMINAL TOLLERORT) is 1065 meters long, covers an area of about 600,000 square meters, has a water depth of 15.1 meters, and has 4 berths. The CTT terminal has a compact design and flexible facility layout. After the entire terminal has been renovated, environmentally-friendly straddle carriers are used to stack containers within a limited area, which makes full use of the terminal space. And the new container gantry cranes make the necessary preparations for handling the largest container ships. The CTT terminal has 14 gantry cranes and 57 straddle carriers; in terms of railways: 5 rail tracks with a length of 700 meters, 3 rail-mounted gantry cranes and 292 reefer joints.

CTB (HHLA CONTAINER TERMINAL BURCHARDKAI) is the largest and oldest container terminal in the Port of Hamburg. The first steel containers were unloaded here in 1968, and today the terminal handles a third of the container cargo in the Port of Hamburg. The CTB terminal is about 2,850 meters long, covers an area of 1.4 million square meters, has a water depth of 16.5 meters, and has a total of 10 berths. The terminal has 30 gantry cranes and 133 straddle carriers, 12 automated yard blocks; in terms of railways: 10 tracks with a length of 750 meters, 4 rail-mounted gantry cranes and 1680 reefer joints, and has own CFS.