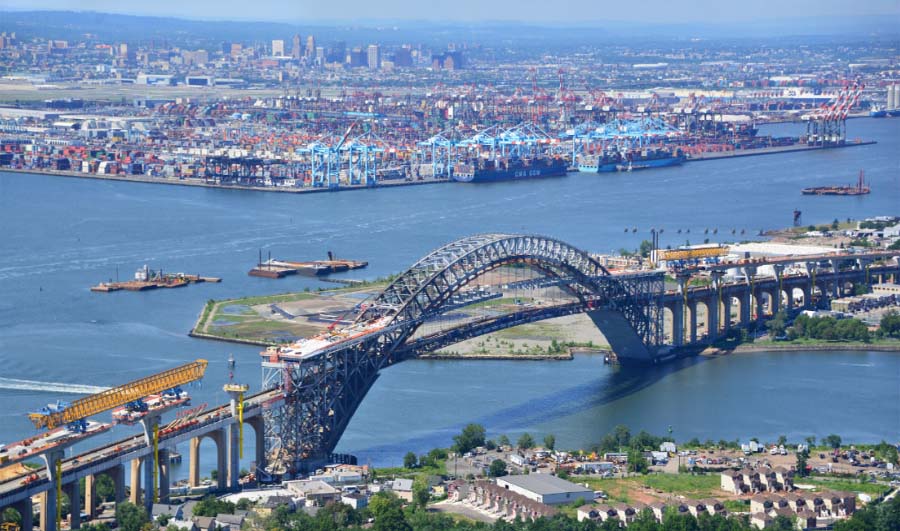 The New York Harbor has a vast hinterland, and the road network, railway network, inland waterway network and air transportation network extend in all directions.

Within the seaport are two bonded zones (foreign trade zones) where commercial goods (domestic and foreign) receive the same customs treatment as outside the United States.

The Port of New York is composed of five container terminals. Each shipping company has its own fixed docking terminal according to different routes. There will be additional charges for trucks to pick up containers at certain terminals.

From a shipping point of view, the Port of New York is an integrated system of approximately 240 miles (386 kilometers) of waterways (requiring pilotage), anchorages and port facilities centered on the New York Bay.

Larger cargo ships require tug assistance to complete turns on sharp bends in the fairway, such as those from the Vancourt Pass into Newark Bay. The main entry into the harbour from the Atlantic Ocean is between Rockaway and Sandy Hook in the southeast; the other entry is from the northeast through Long Island Sound at the exit of the East River. The harbour extends southwest to the mouth of the Raritan River, northwest to Newark Harbor, and north to the George Washington Bridge. Other vehicular passages across the harbour include the PATH tunnel and the Verrazano Narrows Bridge across the New York Bay Channel.

The New York and New Jersey port facilities are the largest oil import terminal and the second largest container terminal in the United States. Although the term New York Harbor has always been used to refer to the Port of New York, which encompasses the five boroughs and the adjacent New Jersey shoreline, it was not until 1972 that they were placed under the management of a single two-state port authority.

Beginning in the 1950s, container ship facilities at the Port of Newark-Elizabeth Shipping Terminal in Newark Bay eclipsed those of neighboring Manhattan and Brooklyn, and it was the largest container port on the East Coast. The port's importance in passenger traffic has now declined, but the Port Authority also manages New York's JFK, LaGuardia and Newark Liberty airports. New York City also has cruise lines, commuter ferries and sightseeing boat services. A new passenger facility recently opened in Red Tick, Brooklyn. Although most ferry services are privately owned, Staten Island Ferries are operated by the New York City Transit Authority.

The Port of New York and New Jersey combine with the airport, making it the second-ranked area in terms of passenger traffic. Nearby JFK International Airport (JFK) air cargo operations and FedEx, the world's busiest cargo airline, use Newark Liberty International Airport (EWR) as a regional hub, creating a sea-air trunk line.

JFK, Newark Liberty, LaGuardia, Stoll, Teterboro, and Lower Manhattan are all operated by the Port Authority of New York and New Jersey.

It is also responsible for the management and operation of the Newark and JFK Airport Light Rail Lines, the George Washington Bridge, the Lincoln Bridge, the Hulank Tunnel, and the Trans-Hudson River Light Rail. The Port Authority is a public institution shared by the two states, self-governing and tax independent.