Planning for the 2022 Peak Shipping Season in U.S.

The Port of Los Angeles, California, recently said it handled 887,000 TEUs last month, the second-busiest April in its 115-year history. In the first four months of 2022, the port handled more than 3.5 million TEUs, a 1% increase from last year's record pace. 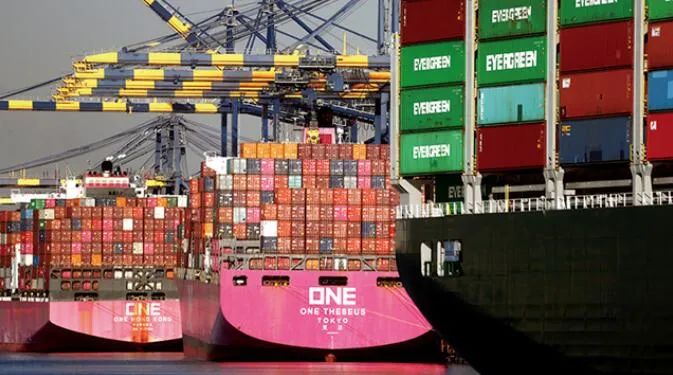 Gene Seroka, executive director of the Port of Los Angeles, predicts that the concentration of shipments in the peak season, the continuous replenishment of online shopping items by retailers, and the possibility of a sudden surge in Shanghai shipments in the second half of this year may trigger further growth in U.S. imports. This has implications for trans-Pacific supply chains that are already under enormous shipping pressure. Imports in the first four months of 2022 are up 31.2% compared to 2019.

Wan Song, head of the DHLink business unit, told Yicai.com: "From this part of the Pacific Ocean to the west coast of the United States, the entire freight rate trend has eased compared to last year, but it still remains at the high level before 2019. This situation is short-lived. The time will not end. The driving force behind this is that the basic demand in the United States still exists. Although the demand for goods in the United States is now shrinking to a certain extent, the demand for shipping is still rigid.” 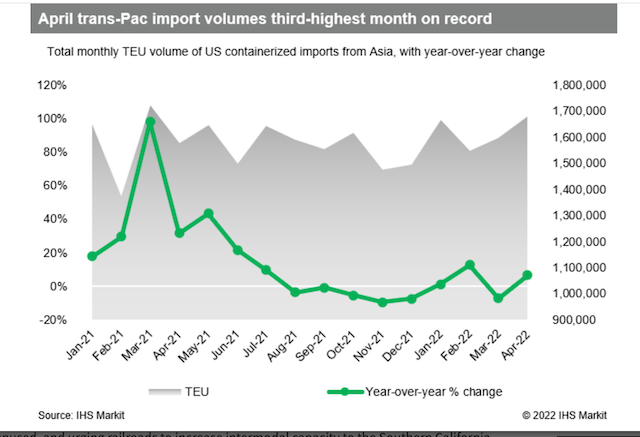 Imports to major U.S. marine gateways rose 6.6 percent in the first quarter from a year earlier, marking the start of a record year, according to research and consulting firm Beacon Economics.

U.S. imports from Asia totaled 6.5 million TEUs through April, up 2.7% from a year earlier, according to PIERS, a data provider owned by S&P Global. Imports in April were the highest in 13 months at 1.7 million TEUs, up 6.5% from April 2021 and the third busiest month on record.

According to US media reports, this year's peak shipping season is expected to arrive several weeks earlier than in previous years, starting at the end of June. Three-quarters of respondents to a survey of shipping industry professionals by online container buying and leasing platform Container xChange said this year's peak season will be as bad as last year's, if not worse. 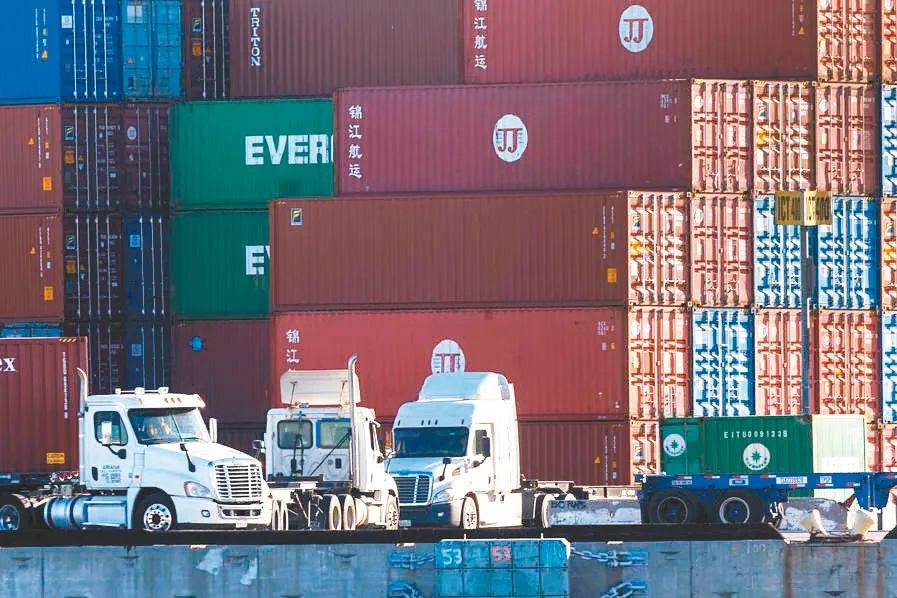 Bennett said the company was baffled by the fact that the company handled a lot of imports in April and shipped even larger volumes in May. "It's definitely bigger than I expected," Bennett said.

In April, at the busiest U.S. ports of Los Angeles and Long Beach, California, containers spent an average of six days in the yard before trucks arrived for pickup, and nine days by rail, according to the Pacific Merchant Shipping Association.

Seloka said containers were staying at ports three times as long as they were before the pandemic. “Railway traffic has increased sixfold since February. We need more rail assets in America’s busiest ports. It’s important that all stakeholders redouble their efforts to maximize the flow of rail cargo from our out of the terminal and into the U.S. domestic economy,” he said.

Supermarket chain Target executives forecast on a recent earnings call that the company will spend $1 billion more on freight this year than expected due to soaring fuel and transportation costs. They also don't expect supply chain pressure to abate until 2023.

Has U.S. port congestion gone away or shifted temporarily?

There are signs that shipping demand has weakened. Retailers like Target and Walmart Inc are scaling back some orders as consumer spending shifts from goods to services. In a recent report, JPMorgan Chase said it expects retailers to restock at a slower pace, especially in sectors such as home goods and electronics. And a slowdown in imports could give ports the breathing room they need.

"We can see from our data that the tension in logistics and the imbalance between supply and demand has improved significantly," Wan Song explained. "There is the impact of the situation in Ukraine, the impact of the U.S. government's no longer sending money, and inflation. The impact of the original can buy or not buy the goods, this demand will be tightened." 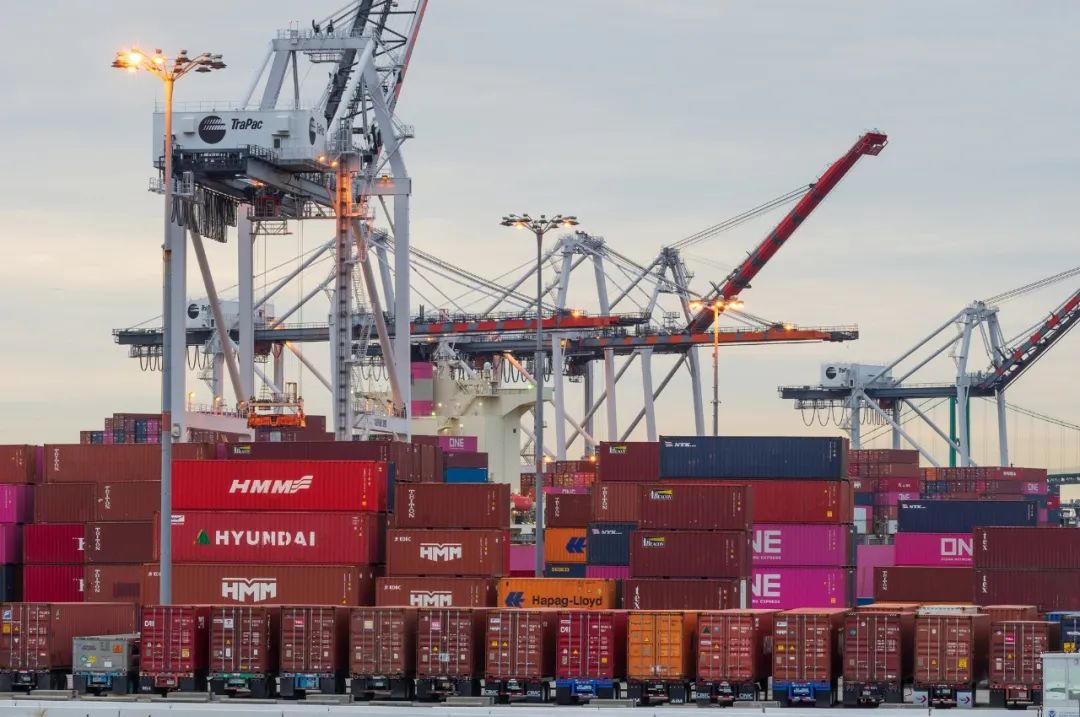 Container ships lined up outside the ports of Los Angeles and Long Beach fell to 22 on May 25, down sharply from a peak of 109 ships in January, according to the Maritime Exchange of Southern California (MESC). However, PIERS data shows that while West Coast imports have fallen this year, East Coast and Gulf ports have seen an uptick, some sharply. That's as East Coast port workers begin contract negotiations and shippers want to divert some cargo away from the West Coast to avoid delays.

An average of 18 ships a day waited on the shores of the ports of New York and New Jersey last week, according to the Port Authority of New York and New Jersey. The Port of Savannah, Calif., the fourth-largest U.S. seaborne import gateway, had 16 container ships waiting to unload on Monday, port officials said. The congestion at the Port of Savannah was caused by a surge in ship traffic, said Griff Lynch, executive director of the Georgia Ports Authority. This shows that there is little slack in the cargo business ahead of the seasonal peak.

"We've seen some Asian manufacturers ship cargoes early to ease predictable port congestion," explained ervinder Johar, CEO of global supply chain solutions provider Blume Global. It's more about shipping to ports on the east coast, shifting the capacity issue from west to east. I think that while we've seen an improvement in cargo flow at ports across the country, it's likely to be short-lived."