Currently, about 95% of China's international trade cargo volume is done by sea. In the cross-border e-commerce industry, this percentage may not be so exaggerated, but with the huge advantage of affordability, sea freight is also the preferred way of stocking for many of our cross-border sellers. So, it is only natural that sea ports have become an unmissable focus for cross-border shipping.

Previously, we have introduced the major seaports, airports and inland ports in Canada, and also briefly analyzed the cross-border shipping hotspots - the ports of Los Angeles and Long Beach. In this article, we will give a brief introduction to U.S. seaports and their performance in cross-border shipping between China and the U.S. from an overall perspective.

In this Overview of U.S. Ports and China-USA Shipping by 3 parts:

According to the data published by Bureau of Transportation Statistics (BTS), including Container, Dry Bulk and Tonnage three types of ports, the United States now has a total of 50 water ports, its specific distribution is shown in the figure below. From its distribution area, there are 20 ports in the Gulf Coast & Mississippi River region, 13 in the Atlantic Coast, and 11 in the Pacific Coast. 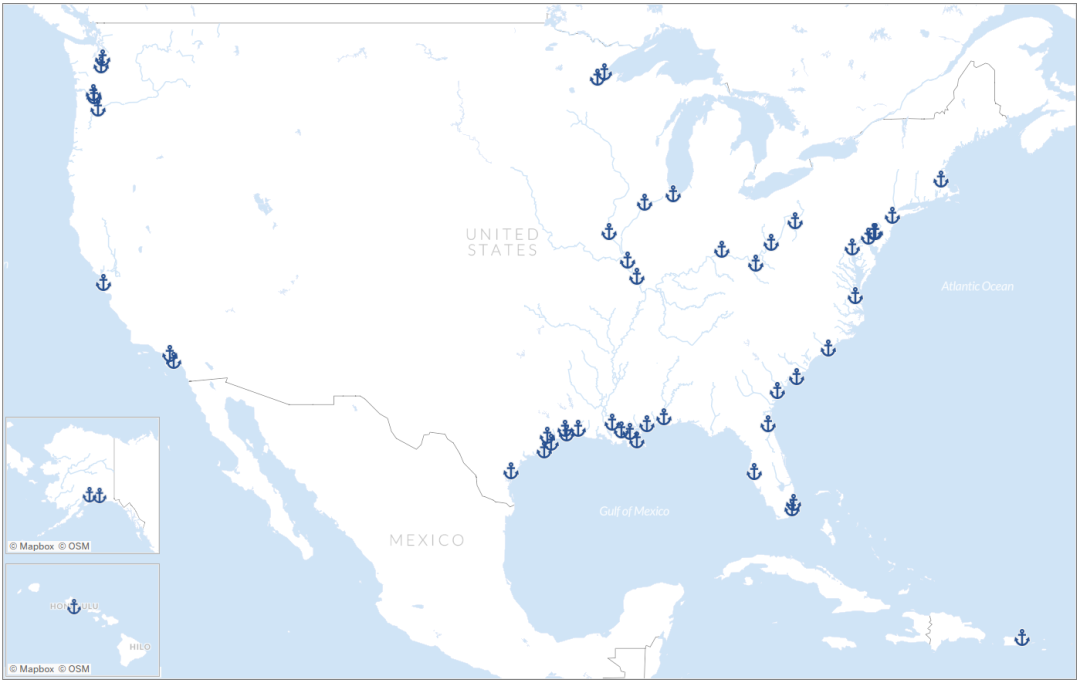 Involving the cross-border e-commerce industry, we are more concerned about Container Port because the goods are mostly transported in the form of sea containers to the U.S. There are 28 container ports in the U.S., with TEU (Twenty-Foot Equivalent Unit) as the unit of measurement, among which Port of Tampa Bay, Port of Portland and Port of Freeport three ports overall cargo volume is relatively small, the remaining 25 ports container sources as shown in the following chart. 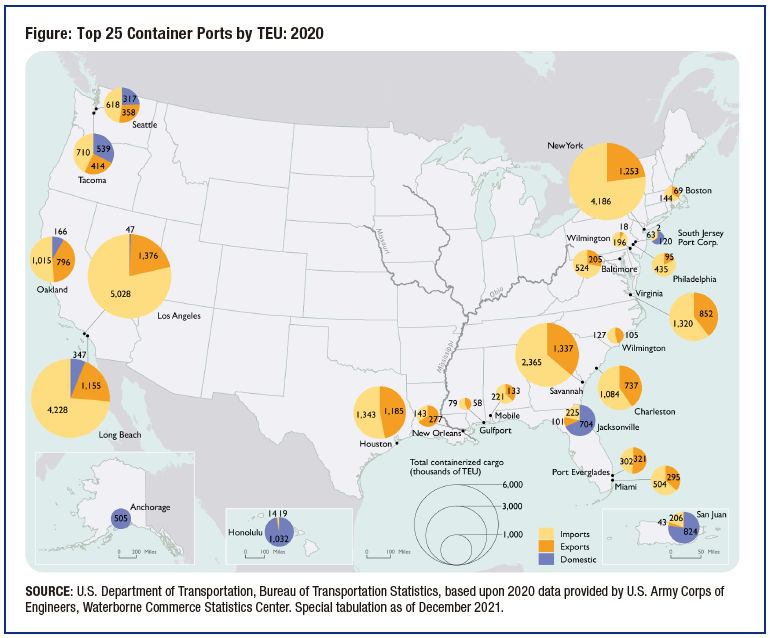 The amount of time a ship spends in port is a major factor in port throughput and performance. The U.S. Bureau of Transportation Statistics uses U.S. Coastal Vessel Automatic Identification System (AIS) data to calculate the berth dwell time of vessels, and the results are shown in the figure below.In late December 2021, there were 91 container vessels waiting to berth at the Ports of Los Angeles and Long Beach, and a total of approximately 112 container vessels waiting to berth at U.S. container ports. Port congestion has been the norm for large container ports. 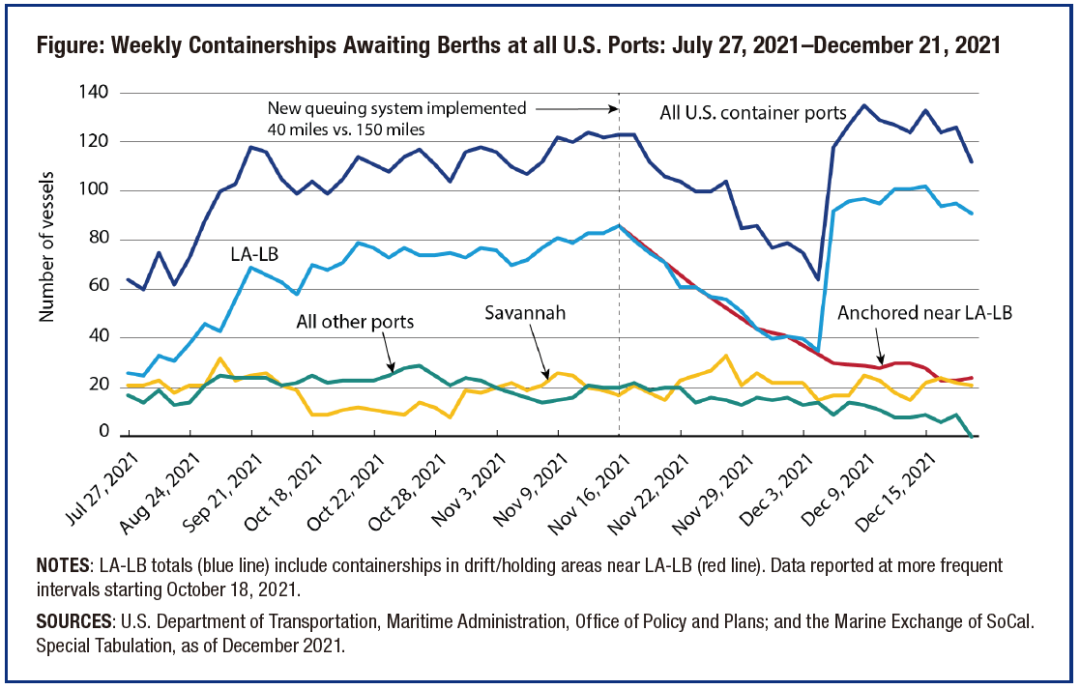 China is a major trading partner of the United States in terms of the country of origin of the cargo. According to U.S. Customs statistics, China's annual share of U.S. import business has remained at around 40%. In terms of actual performance, in February-March 2020, the suspension of Chinese trade caused a steep drop in activity at the ports of Los Angeles and Long Beach. This, in turn, reveals the direction of cargo transportation for domestic cross-border sellers, as well as the main landing points of the China-US route. 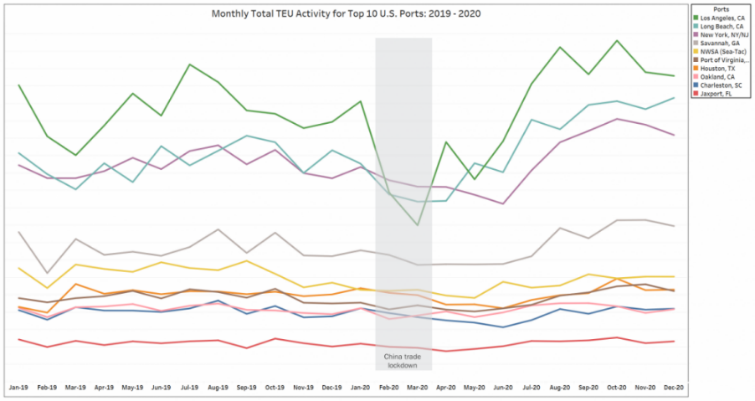 Looking specifically at Chinese ports, Shanghai is undoubtedly the number one sea lane, with 3.98 million TEUs in December 2021, compared to a total of 23.09 million for all of China (Shenzhen is second with 2.53 million TEUs, followed by Guangzhou and Ningbo, both with over 2 million TEUs for the month). Cross-border sellers ship goods along these same routes, arriving at ports from across the country, completing a series of processes, and then boarding specific ships that float across the ocean to land at U.S. seaports.

According to monthly data provided by Alphaliner, as of February 2022, of the three routes deployed in the east-west direction, FE - Eur, FE - N.AM, and Eur - N.AM, FE - N.AM is the one we are looking at, i.e., the Far East to North America route, whose cargo volume reached 670,000 TEU/week in February 2022, which is indistinguishable from FE - Eur is hard to distinguish. Among them, four shipping companies, Maersk, COSCO, MSC and CMA CGM GROUP, remain strong, occupying the top four positions in the cargo volume ranking of the route; among the alliances, OCEAN, 2M and THE alliance provide 89% of the cargo volume share. 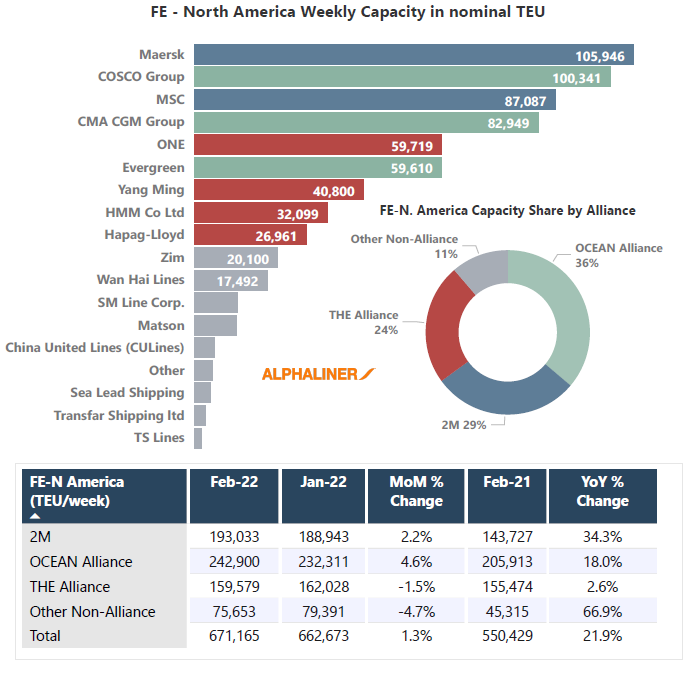 Our cargo may be on board one or more of the above shipping lines, moving down the ocean currents to a port in the U.S. East or West with the roar of the steamers. After arriving at the port, as the shipping company is highly tied to the port, the dock where the cargo is docked will be different for different shipping companies. As we introduced in the "Basic Information of Los Angeles Port", the Port of Los Angeles and the Port of Long Beach have different dockings (the map below shows the distribution of docks at the Port of Long Beach), and different docks at other ports also have their own functions. 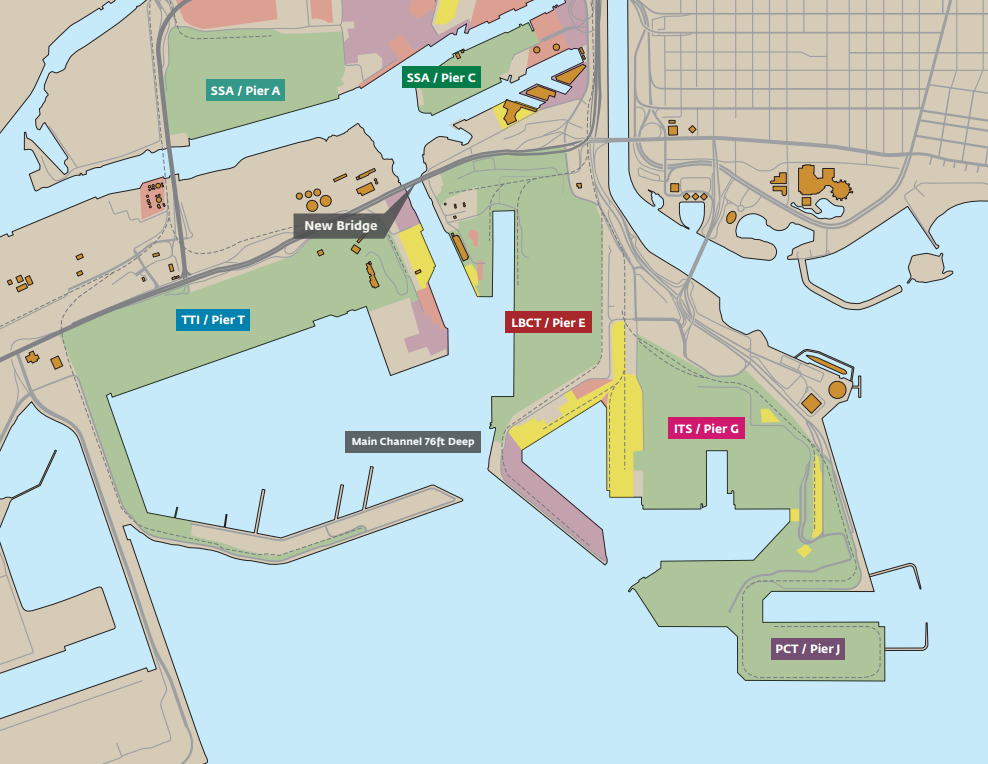 Each shipping company has its own strengths, and the terminals they dock at can differ in many aspects of capacity such as terminal size, berth length, number of cranes, availability of port railroads, and number of total stacking trucks. I wonder if you sellers and friends will weigh and evaluate the relevant aspects before shipping goods? Or do you have to make a compromise choice due to tight space and soaring freight rates?