India consists most of the Indian subcontinent, an Asian country that is at the center of trade on important shipping routes. It is surrounded by the sea on three sides, with the Bay of Bengal to the east, the Arabian Sea to the west, and the Indian Ocean to the south. With more than 7,000 kilometers of coastline, India has one of the largest Exclusive Economic Zones (EEZs) in the world.

Most ports in India are wholly owned by the government, and individual terminals and facilities may be run by private organisations. Most of the terminals in India are operated by DP World (including formerly P&O), AP Moller Terminals and PSA International. A handful of private ports are owned by Reliance Industries and Adani Group.

Due to their location on the Indian Ocean, these ports serve ships from the Middle East, Europe and Africa to the West. Major Eastern ships sail from Southeast Asia, Japan, Korea and Australia. Most of the import trade from the East is oil, imported from Iran and the Middle East. Agricultural products, fertilizers, natural ores and minerals, automobiles, textiles and food are the main commodities passing through Indian ports. 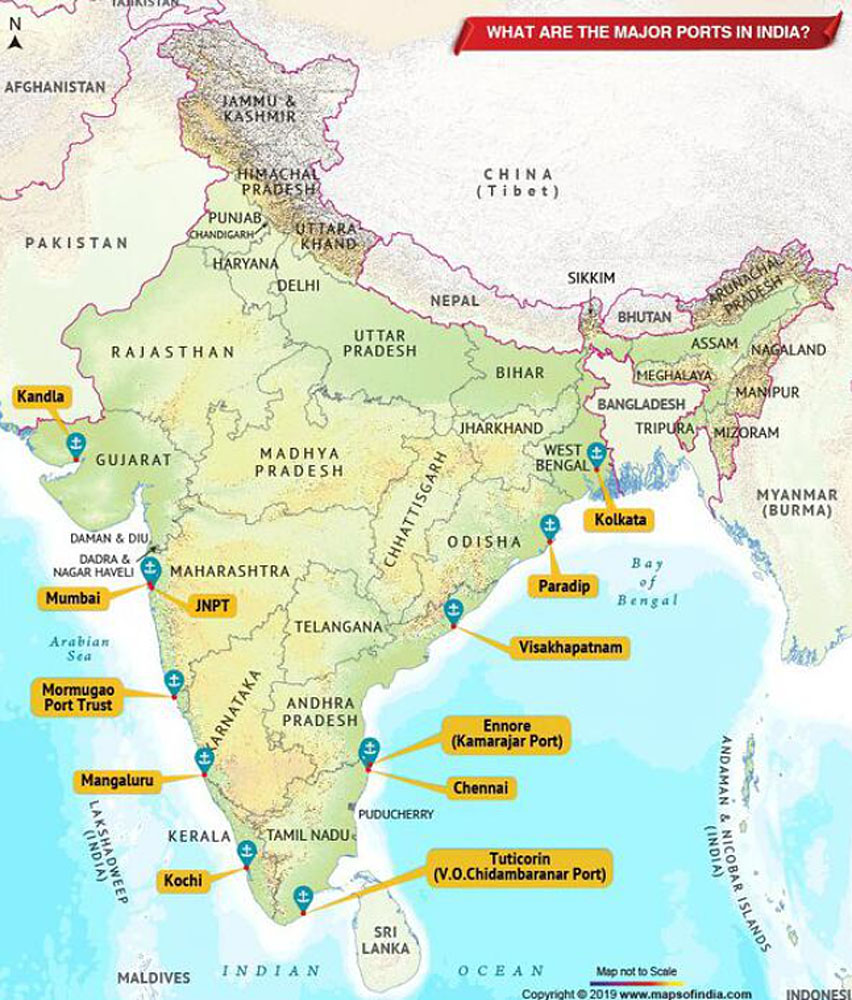 Mumbai, formerly known as Bombay: Mumbai Port is located on Mumbai Island off the west coast of India (the island is connected to the mainland), bordered by the Arabian Sea (ARAB) to the west. It is the bridgehead of the South Asia Continental Bridge, which extends from Calcutta in the east to Mumbai in the west, with a total length of 2,000 km, and is the transportation hub of India by land, sea and air. With the development of nearby shallow oil fields, it has again become a rear base for oil extraction. The port is about 28km from the country's largest international airport.

Mumbai is the largest port in India, and the Port of Mumbai operated 4.49 million TEU containers in 2015. According to the Mumbai Port Authority, the Port of Mumbai has 63 berths, of which I think useful, 6 special berths for containers, 16 multipurpose berths, 1 berth for tankers, 3 berths for break-bulk cargo, 1 berth for heavy cargo, and 6 berths for chemical vessels. The port of Mumbai has railway lines to all parts of India's interior, and the port can realize sea-rail change, which can be called India's "Shanghai".

New Delhi is the capital of India, is the political, economic and cultural center of the country, and is also one of the largest commercial centers in northern India.

Panaji Port is in Goa, the capital of Goa, and is owned by the Panaji Port Authority (http://www.ports.goa.gov.in/en/). Panaji Port is primarily an iron ore exporting seaport and a coal importing port.

Mormugao Port, also in Goa, appears to be larger than Panaji Port and is owned by the Mormugao Port Trust (www.mptgoa.com). Mormugao is India's largest iron ore export port, connected by rail to the port area, and has seen strong growth in recent years, with Mormugao Port being ranked as the fastest growing port in India with a growth rate of 41.23% in the just concluded 2015 year. The port has 11 main quay berths with a maximum water depth of 14.1m and a maximum capacity of 160,000 dwt vessels, including dedicated berths for ore and oil. The loading and unloading equipment includes various shore cranes, steam cranes and tugs, etc. The maximum lifting capacity of the shore cranes is 30 tons, and the annual cargo throughput capacity is about 20 million tons. In addition to ores, the main export goods of Marmugamo are bean cakes and dried fruits, while the main import goods are coal, grain, automobiles, cement, fertilizers and petroleum products.

Cochin Port has eight berths for general cargo, two each for coal, tankers and low berths, and one each for container, multipurpose and passenger berths. The total length of the quay line is about 1400 meters and can accommodate vessels with a draft of 9 meters along the side; there are also 11 floating berths in the river, which can accommodate vessels of 60-170 meters in length and 8.5 meters in draft. The whole port has nearly 20 berths with annual throughput of about 5 million tons, mainly importing oil, grain, steel, fertilizer; exporting rubber, tea, coffee, pepper, spices, aquatic products, etc.

Chennai Port in Tamil Nadu, its capital, belongs to the port authority for CHENNAI PORT TRUST (http://www.chennaiport.gov.in); Chennai Port is located in the Bay of Bengal, is the second largest port in India.

Chennai Port, located in the eastern port of India, has now developed into the largest port with a variety of operational capabilities such as containers, roll-on/roll-off vehicles and engineering cargoes, and its main exports include iron ore, leather and cotton textiles, and its main imports include wheat, raw cotton, machinery, and steel and ore. In 2014-2015, Chennai Port's container throughput reached 1.55 million TEU.

There are three terminals in Chennai port, namely Dr. AMBEDKAR DOCK, JAWAHAR DOCK and BHARATHI DOCK, with the total number of berths of the three combined being 24. Now it has developed into the largest port with a variety of operational capabilities such as container, ro-ro vehicle and engineering cargo.

Kolkata is the capital of the Indian state of West Bengal, next to Bangladesh, and the third largest city in India after Mumbai and Delhi.

Kolkata is 203 km from the sea and is not a seaport city, but Kolkata Port Trust (http://www.kolkataporttrust.gov.in), the port authority of the port, has two major terminal systems. One is the port of Haldia, 50 kilometers to the southwest, and the other is the well known Kolkata Port, which is located along the river.

The importance of Kolkata port mainly comes from the hinterland area it can cover. Through Kolkata's rail and road links, Kolkata can affect the whole northeast India, and through transshipment, goods can easily reach neighboring Nepal, Bhutan and even the Tibetan region of China.

Bangalore is a city in southern India, the capital of Karnataka state, the fifth largest city in India, with a population of about 8.5 million people. After India's independence in 1947, Bangalore developed into a center of heavy industry. The successful establishment of high-tech companies in Bangalore has made it the center of information technology in India, and it is known as the "Silicon Valley of Asia"...

Hyderabad: Hyderabad is a city in southern India, the capital of the state of Telangana, located in the middle of the Deccan Plateau, on the banks of the Musi River, a tributary of the Krishna River. It is the sixth largest city in India.

Kandla port in Gujarat, belonging to the port authority is Kandla port Trust, the port is located in the northwest of the Indian peninsula, the northeast end of the Karachi Bay, there is a railroad connection to the capital New Delhi, the capital and other northern industrial and commercial centers of the most convenient sea gateway. The port is located on the west coast of the strait between the mainland and the small islands in the bay, and ships enter the port from the south. The channel is shallow, and ships with a draft of 9 meters can enter the port at high tide on a small tide, and ships with a draft of 10 meters or more can pass at high tide. There are good navigational markers from the shallows to the port, which is open day and night. The port area extends from north to south, and the southern part is a dry cargo wharf along the shore with 6 berths. The total length of the wharf line is 1440 meters, which can accommodate vessels with a draft of 9 meters. There are 21 shore cranes of 3 to 10 tons on the quay; there are also 2 operating floats in the northeast and southeast waters of the dry cargo quay for loading and unloading of general vessels and deep water vessels with a draft of 11 meters. The oil jetty is located in the northern part of the port area and there are 2 oil jetties with a maximum docking capacity of 40,000 tons. In the north of the port area, there is also a salt export wall and an operating pontoon berth each.