Maersk recently released an announcement on its official website, analyzing the impact of the current Russian-Ukrainian conflict on the global shipping market and further adjustments to its business.

Maersk said that due to the conflict between Russia and Ukraine and the sanctions imposed by some countries on Russia, a series of chain reactions occurred in the global supply chain, which in turn caused a high degree of uncertainty in the global shipping network and serious delays in ships.

According to Maersk's analysis, the direct impact of the Russian-Ukrainian conflict is that European customs are strictly inspecting all Russian import and export goods transshipped through terminals and ports due to the direct or indirect sanctions imposed on Russia by some European countries.

Indirect impacts include delays in all related cargoes, congestion at transshipment centers, which in turn affects the stability of global supply chains.

Maersk stressed that these impacts are not limited to trade with Russia, but are global.

Due to the current restrictions and strict inspections of the relevant transshipment hubs, which have affected the transportation of export goods in Asia, Maersk adjusted the sailing plan of the Asia-Europe route AE6 in order to improve the punctuality rate.

There are 11 ships in the first batch of affected ships, and the details are as follows: 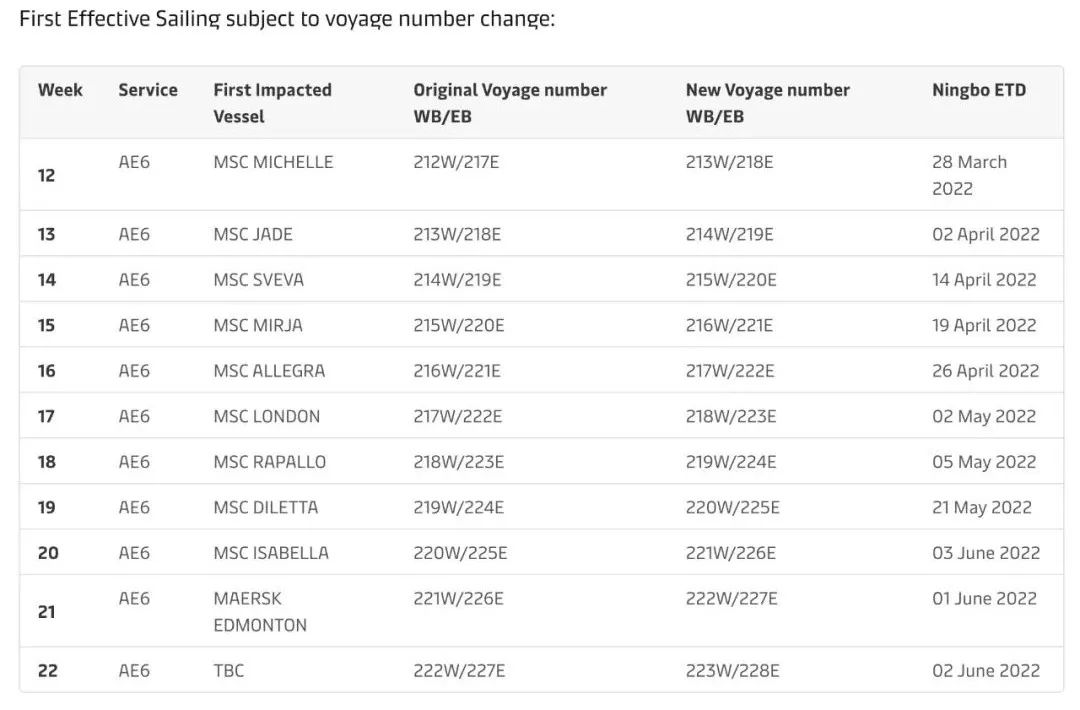 Maersk said it is working with European ports to clear the backlog of cargo and will use alternative routes to redistribute cargo to other route networks in the future to minimize the impact on customers.

In response to the situation that the goods have been loaded or unloaded at the ports of Russia and Ukraine, Maersk said that its main task is to not increase the congestion of global ports and warehouses. Therefore, for the goods in transit and the goods that have been booked before the announcement of the suspension of business, Maersk will Do your best to reach your destination.

However, due to compliance with various controls and inspections, there may be significant delays in the transit time of the relevant shipments.

MSK further stated that no storage fee will be charged for goods that have been shipped to Russia and Ukraine, as well as those that cannot be delivered due to various restrictions, while a change of destination service (COD) will be provided free of charge and additional sea freight will be waived. and other related expenses.

Meanwhile, in a bid to ease congestion in the European supply chain, Maersk said it would waive cancellation fees for space bookings involving Ukraine and Russia until March 11; and waive demurrage charges incurred at temporary ports of call (interim stop) for Ukrainian imports and exports and for Russian exports.