A few days ago, K-Alliance members HMM, SM Line and Pan Ocean said that they will jointly launch the first K-Alliance's CVT service. 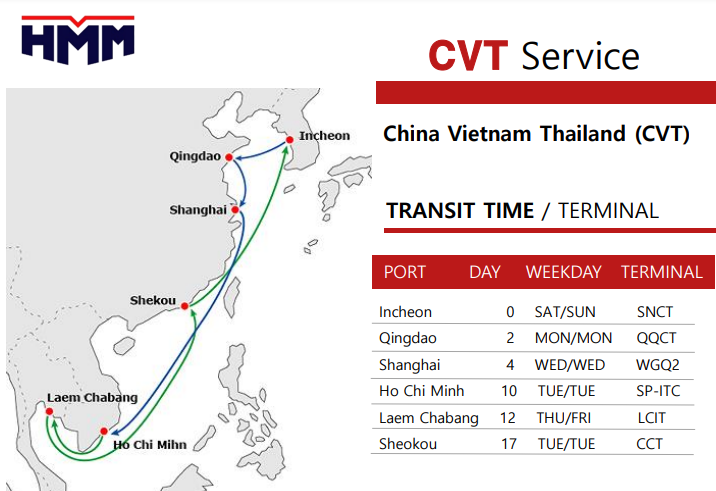 It is understood that the new service is operated by three ships of about 1800TEU, including the "SKY RAINBOW" ship of HMM1809TEU, the "POS HOCHIMINH" ship of Pan Ocean Shipping's 1811TEU, and the "JAN" ship of SM Line 1708TEU.

The CVT service will make its maiden voyage from Incheon on June 26. The inaugural ship is "SKY RAINBOW". It is expected to call at Qingdao Port on June 27 and Shanghai Port on June 29.

It is understood that in December 2020, five South Korean liner companies, including HMM, Sinokor, SM Lines, Pan Ocean Shipping and Heung-A Line, signed a Share the agreement and form the K alliance.

The establishment of the alliance is mainly due to the aggressive expansion of shipping capacity by liner companies in other countries, making the market share of Korean liner companies facing challenges.

On September 1, 2021, K Alliance officially began co-cabin cooperation on intra-Asian routes, and plans to transfer cargo from Asia to the United States and Europe.

The Ministry of Maritime Affairs and Fisheries of South Korea previously stated that this is the first attempt by the South Korean shipping industry to form an alliance in order to gain scale advantages. It aims to save costs for liner companies by deploying greener, modern ships, combined use of port facilities and containers.