The impact of U.S. cargo volume on freight rates

Speaking of cargo volume, I would like to add that the physical sensation of each person varies greatly from company to company, from region to region, from role to role in the supply chain, and from time to time. For example, different shipping companies, different freight forwarders, different ports of origin, at the same time, the feeling about the change of cargo volume can be very different. Therefore, when I give the statistics of shipping volume, I usually specify the parameters of the volume, such as from where to where, which time period and according to which time standard, otherwise it would be misleading to say the result directly.

In addition to the direct impact of overall cargo volume on freight rates, today we will look at the changes in the volume of U.S. routes by region of the port of discharge, and whether this change in distribution also affects the direction of freight rates?

2021 is the year of the United States imports across the board, whether it is the West Coast, or East Coast. The chart below shows the change in Asia to U.S. cargo volume by port of discharge area in 21 years compared to 20 years. With a 20% increase in overall volume, PSW (US Southwest), the largest import port area, grew 17% and PNW (US Northwest) rose 25%. The East Coast total was smaller than the West Coast, recording a 21% increase, while the Gulf of Mexico, which has the smallest base, had the fastest growth at 32%. This shows that last year's market is regardless of the east and west coast are rising, the container can unload the ship on the line. Reflected in the freight rate is the West Coast (especially PSW) led the rise, followed by the East Coast, and then go hand in hand. 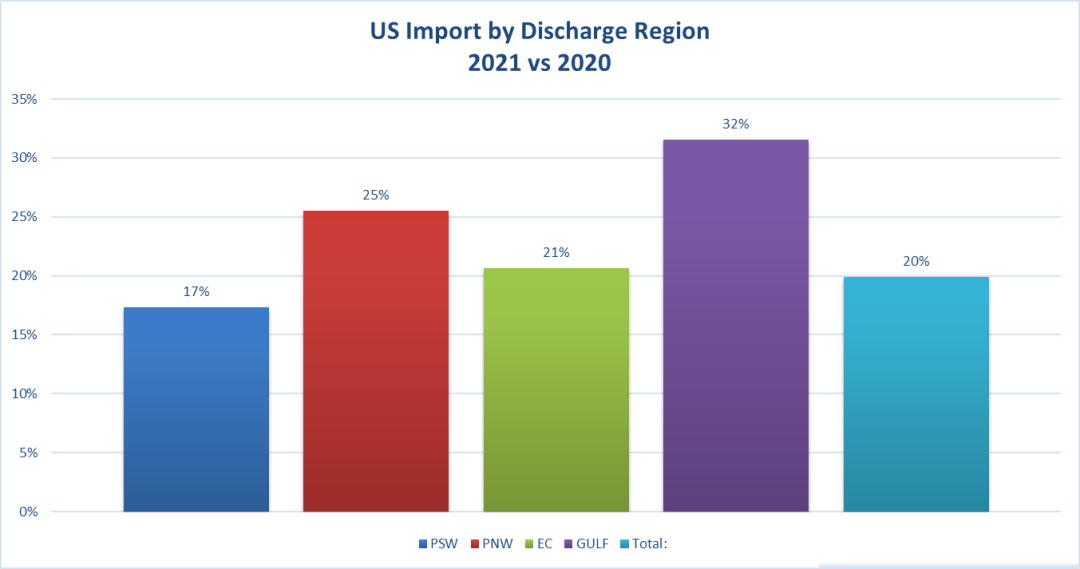 This year, the situation has suddenly changed, the trend of "East up and West down" is very obvious.

First of all, PSW, the largest port area for U.S. imports, has dropped from 50% of total imports last year to about 47% at present. From January to June this year (by arrival date, the same below) U.S. imports from Asia via the U.S. Southwest (local + IPI) fell 3% year-on-year. What is more telling is that in the first 6 months of 2022, cargo volume fell year-on-year for 5 consecutive months, and only in June did cargo volume pick up year-on-year, but still fell year-on-year.

The reason for this, apart from the general environment, is that the eastward shift of cargoes started early because of the fear of strikes triggered by the breakdown of union negotiations in the U.S. and West, and has continued until now.

Almost every month, the year-on-year decline in cargo volume on the downward pressure on freight rates is undoubtedly great. It can be said that last year's hot market is driven by the U.S. Southwest, to this year is just the opposite, the price of the broken trend is also precisely from the U.S. Southwest. We don't have the data on the change of US Southwest capacity this year. If shipping companies do not make corresponding adjustments to adapt to the changes in cargo flow or the magnitude of adjustment is not large enough, it seems inevitable that in this market of U.S. Southwest, the comparison between cargo volume and capacity will change, and the freight rate will be maintained without support, and the decline will be inevitable. 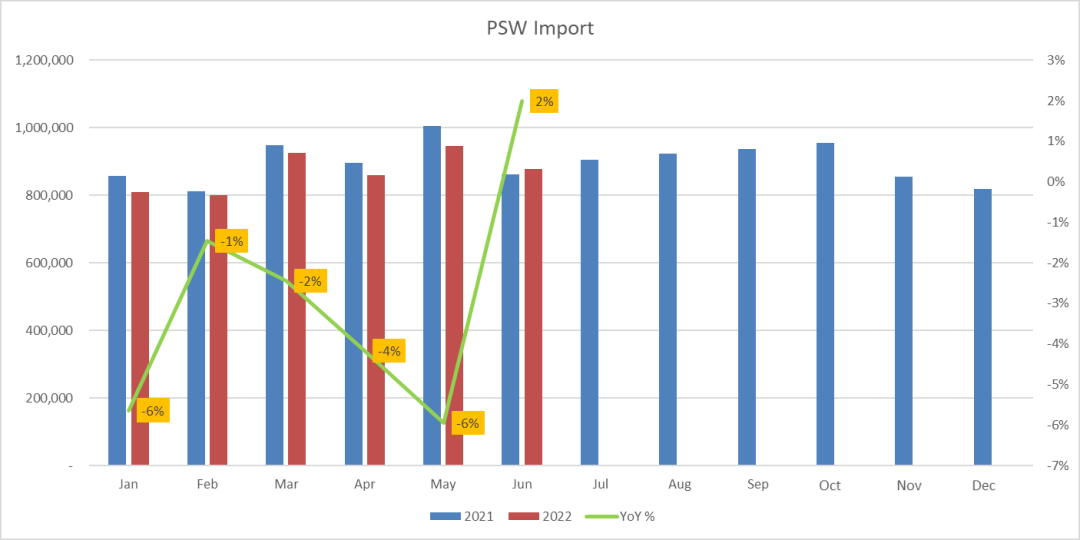 Interestingly, the month-over-month (from February) curves for this year and the first half of last year are highly consistent, with the two curves from February to May almost overlapping each other, before the change in magnitude in June. This shows that the seasonality of shipments from the US Southwest has remained almost unchanged for two years, with more when it's time for more and less when it's time for less. 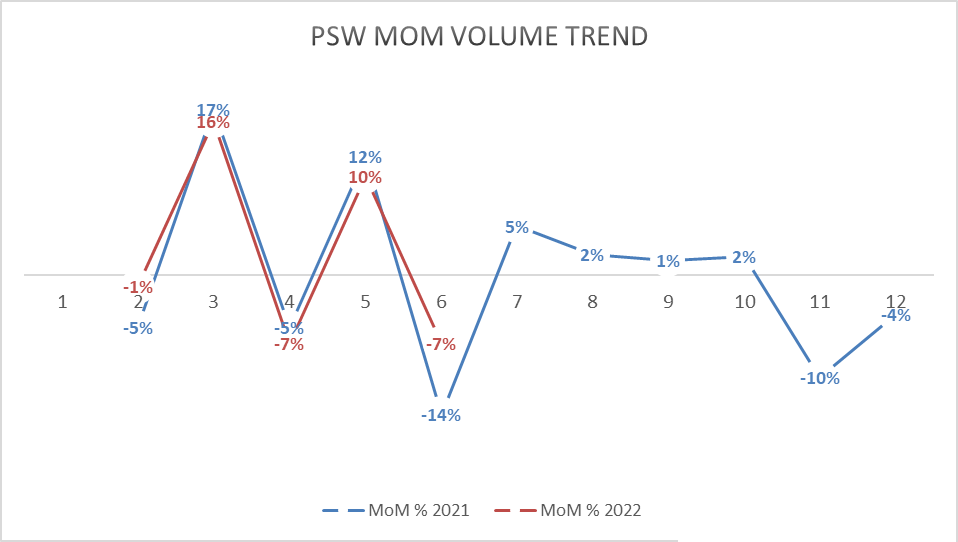 The PNW (U.S. Northwest) port area in the north has not seen the same change in cargo volume as the PSW. The first half of the year was down 7% compared to last year, and after a surge in February, the decline intensified in March with four consecutive months of double-digit declines.

In addition to the overall eastward shift of cargo volume, the continued port congestion in the northwest of the U.S. also caused a portion of the cargo volume loss. In such an environment, last year's PNW selling price was once higher than the PSW, and the situation is gone. 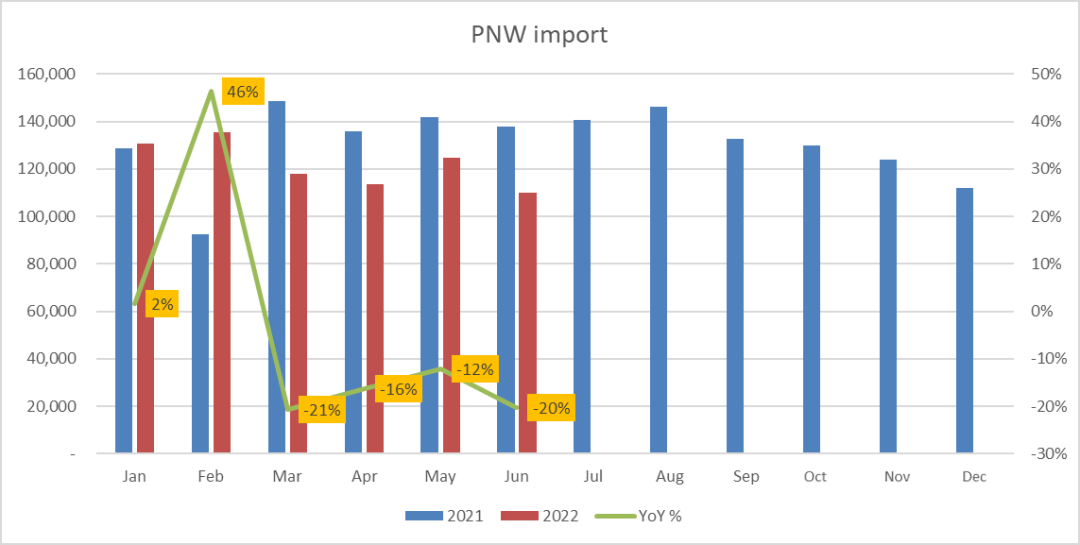 On the month-over-month curve, PNW showed the opposite change from February to March this year, and from April, the two curves started to overlap again. 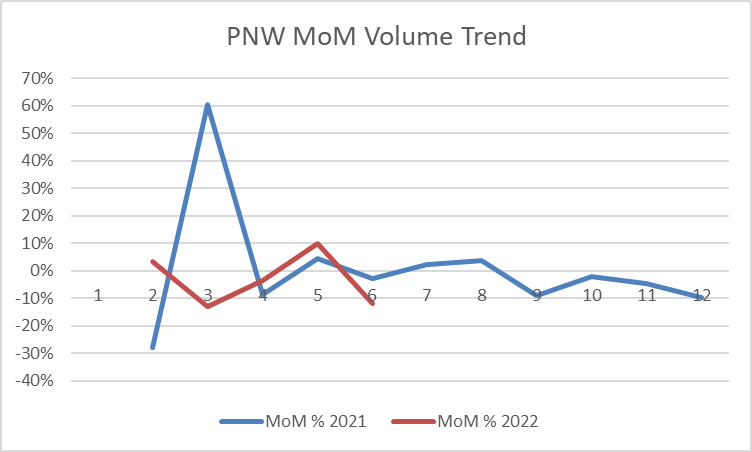 In contrast to the decline in the US West, the US East cargo volume increased by 12% year-on-year in the first half of this year, with a significant increase. After the highest volume of cargo in May this year, the volume dropped in June, but there was a 7% increase from last year. As time advances and there are new developments in the U.S. West union negotiations, the possibility of a strike is not high, and this pace of shifting away from the U.S. East for fear of a U.S. West strike is expected to slow down and finally return to the fundamentals on the demand side.

Looking at the chain curve, the volume of cargoes from the US East this year has been on a monthly upward trend, unlike last year when the highs and lows were obvious. It is expected that from the second half of the year, once the concern of the U.S. West strike subsides and the pace of shipments returns to normal, the monthly chain curve will converge with that of last year, only the magnitude of the fluctuation will be different. 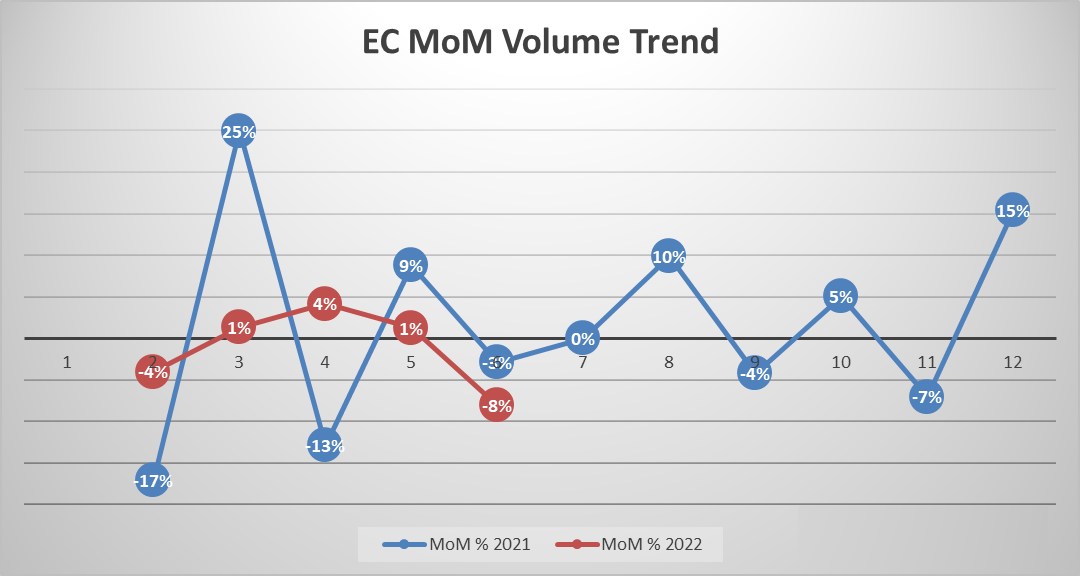 The month-on-month curve shows that the cargo volume this year generally keeps growing month by month, without the big ups and downs of last year. 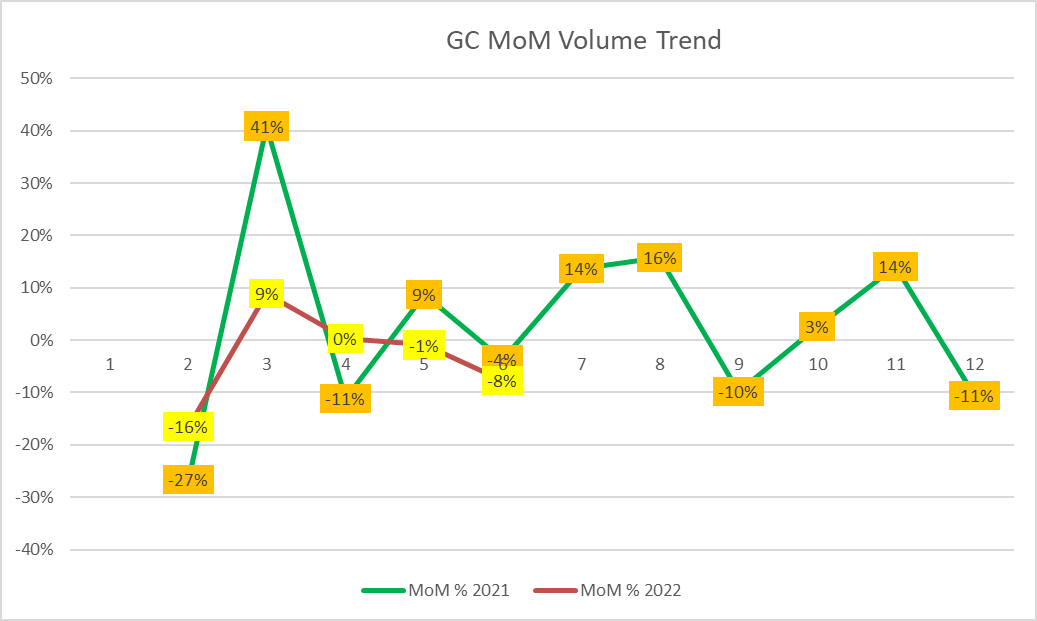