World suffers from heat as hottest weather in 125,000 years

According to U.S. media reports on the 23rd, temperatures in several areas of the United States reached record highs in July, resulting in at least 19 deaths. Meanwhile, affected by strong winds and high temperatures, the mountain fire near Yosemite National Park in California's Mariposa County is still spreading on the 23rd, and the local government has issued evacuation orders for more than 6,000 residents around the area.

According to statistics released by the California Department of Forestry and Fire Protection on the 23rd, as of that morning, the fire near Yosemite National Park is still not under control and the fire area has expanded to 2,650 hectares. Footage taken at the scene shows the fire burning fiercely, with smoke pouring into the sky and the sky burnt orange-red.

So far, the fire has destroyed 10 buildings, more than 2,000 other buildings are threatened, and some vehicles along the road have been burned. Local transportation authorities have closed a number of nearby highways, and more than 2,000 homes and businesses have experienced disruptions in their power supply.

The fire is said to be the third mountain fire in Mariposa County, California in two weeks, and the cause of the fire is still under investigation. Meteorologists say the hot weather sweeping central California will continue in the coming days, which is very unfavorable to the fire control. It is expected that by the 25th, the highest temperature in many cities across the United States will reach 41 degrees Celsius, and some cities are expected to remain around 38 degrees Celsius for at least the next five days.

According to media reports, as of the evening of the 23rd, the fire was not under control in any way. Officials expect it could take up to a week to get the fire under control. 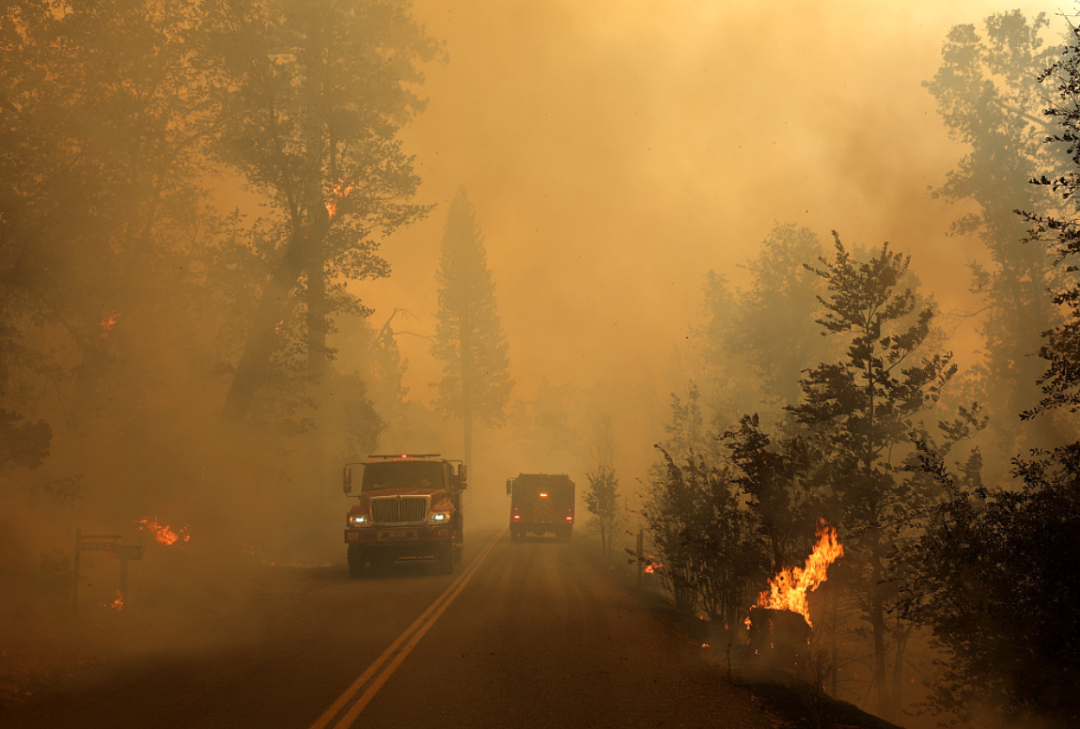 The California Department of Forestry and Fire Protection said the fire started southwest of Yosemite National Park on the afternoon of the 22nd, not far from the town of Central Pines in Mariposa County. The fire grew unusually fast, with an area of about 17.6 square kilometers at about 10 p.m. that night, increasing to about 48 square kilometers by the afternoon of the 23rd.

California Governor Gavin Newsome declared a state of emergency in Mariposa County on the 23rd, affected by the fire.

According to the Associated Press, affected by climate change, the average temperature in the western United States has been getting warmer and drier over the past 30 years, and wildfires in California have become larger and more frequent in recent years. The fire comes as firefighters struggle to extinguish another blaze that began inside Yosemite National Park. That fire was one of the largest wildfires in California this year, stretching from Yosemite National Park to the Sierra National Forest, destroying nearly 20 square miles of forest. By the 22nd, nearly 80% of the fire was under control.

World suffers from heat as hottest weather in 125,000 years

This is part of a global pattern of rising temperatures that scientists and climatologists generally believe is the result of human activity.

According to CCTV news report, the data released by the Italian research agency on the 22nd shows that wildfires are frequent due to the recent rare high temperature and the most severe drought in 70 years.

Citing the contents of a report submitted by Ansa news agency for researchers at Italy's Cattolica University, CCTV News reported that during the above-mentioned period, the fire department deployed more than 140,000 firefighters and more than 53,500 fire engines and other vehicles to fight fires, with a total working time of nearly 40,000 hours.

This report says that Italy was the European country most affected by wildfires last year and needs to be alerted to the fact that the situation looks worse this year. Italy had 1,422 fires on record last year, ranking first and second in Europe and the world, respectively, with a combined area of 160,000 hectares on fire last year," said Catolica University researcher Chiara Cardedu. This number of recorded fires is the highest in Italy in 10 years, but we estimate that this year's figures will be worse."

Take, for example, a recent fire along Vesilia in central Italy's Tuscany region, where wildfires led to the evacuation of more than 1,000 people and 868 hectares of overland fires. The northern district of Fregli-Venezia Giulia has been hit by several wildfires in quick succession recently. A female civil defense volunteer was killed by a fallen tree while helping to fight the fire on the 21st.

Over 600 people evacuated as fire breaks out in northern suburb of Athens, Greece

A mountain fire ignited in a forested area on the Greek island of Lesvos and gradually spread to the seaside resort of Vatera on 23rd local time. The scene of the fire was covered with smoke, and all local residents and tourists have been evacuated.

According to CCTV News, at 8:00 a.m. local time on July 20, Greek General Fire Brigade spokesman Ioannis Atopios said that a hill fire broke out in the northern suburbs of Athens in the Puntland area the night before. Many houses in the northeastern suburbs of Athens were burned, roads were closed, and the number of evacuees exceeded 600 people, with three people injured to varying degrees.

Due to the ongoing disaster, the Greek government has regarded this summer as one of the most difficult summers in the history of the Mediterranean region.

Record high temperatures in England cause fires to rage

The Daily Mail news website reported that the record-high temperatures in England have led to fires in many places.

In the Winnington area of England, forest fires destroyed a large number of houses. Some local residents said they lost everything in the fires. Local time on the 19th, London, 110 fire engines to fight fires, the fire scene a piece of scorched land like a "war zone", a firefighter on the scene lamented that this is like "hell". 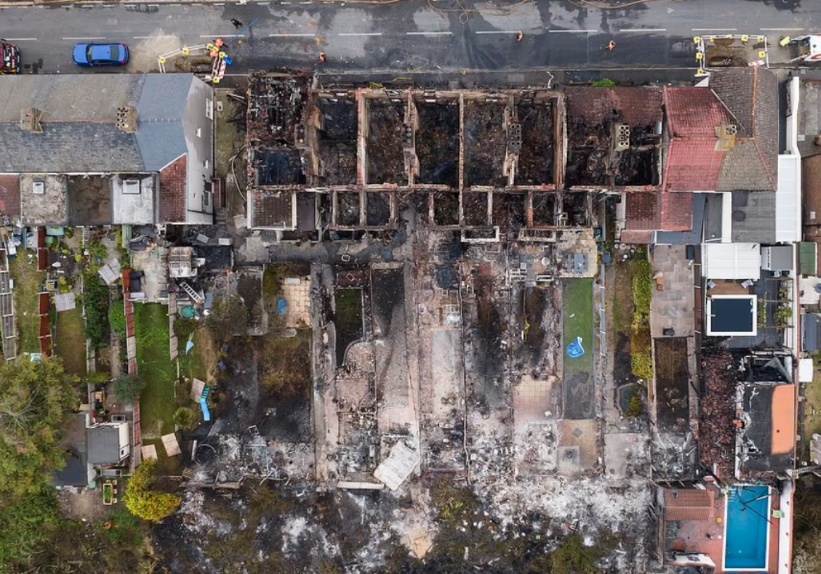 In addition to the Winnington area, the worst affected area is Dagenham in East London. Video from the scene shows that the fire destroyed many buildings and black smoke rolled over many places.

The London Fire Brigade said the 19th was the busiest day for the London fire department since the end of World War II. A British expert warned that the severity of fires across the UK is unprecedented, and with climate change, there could be more fires in the future.

The highest temperature in Britain also exceeded 40 ℃ on the 19th, a new record high. London declared a "major event" state on the same day. Extremely dry ground and high temperatures make all over the UK like a ready to detonate "powder keg". In addition to London, England, Hertfordshire, Buckinghamshire, Leicestershire, as well as Scotland and Wales, many places have fire.

Spain and Portugal this summer forest fires rampage, a large area of forest land was destroyed.

Local time 20, ravaged many parts of Spain's forest fires are still burning, some local service agencies have exhausted their fire-fighting capacity. About 4,000 people have been evacuated due to fires in the central province of Ceblos, Avila.

A mountain fire has been raging for four days in the city of Murca in northern Portugal on 20 local time. More than 1,000 firefighters have been battling forest fires across Portugal, including in the city of Murca, since a heat wave of more than 40 degrees Celsius swept through several areas of the country.

According to China News Network, Hans Kluge, director of the World Health Organization Regional Office for Europe, said on 22 local time that Europe has been hit by a heat wave, with frequent hot weather and wildfires. In Spain and Portugal alone, more than 1,700 people have died from the heat this year. 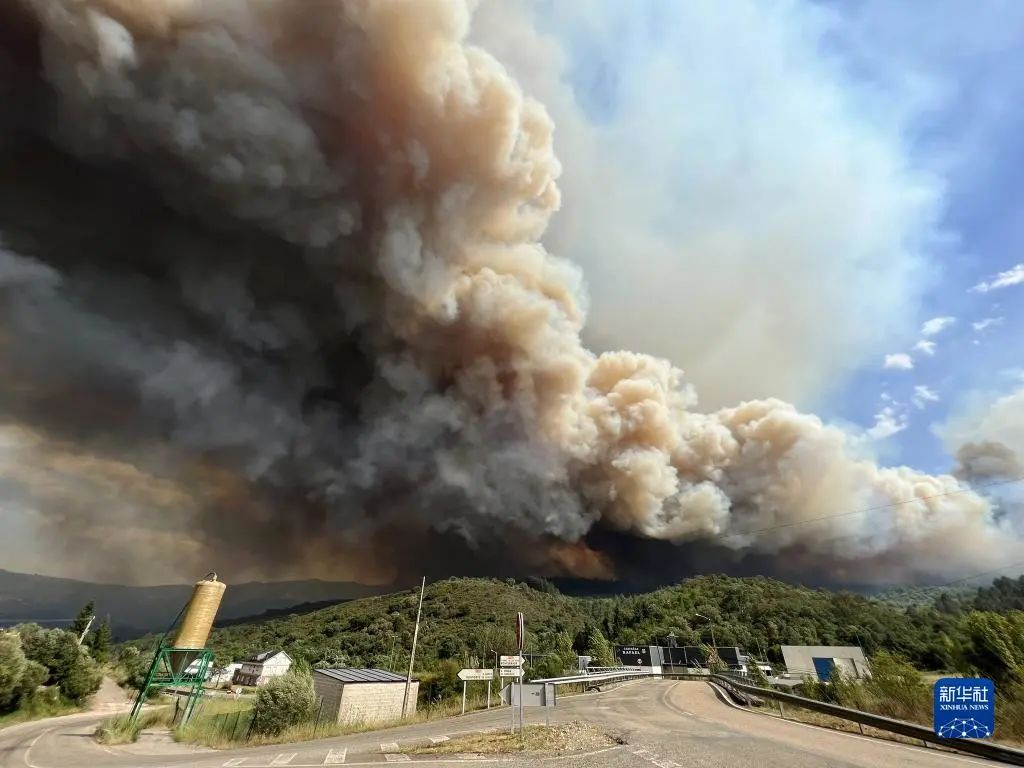 July 20 at the scene of a mountain fire in the autonomous region of Galicia, Spain，Photo by Xinhua News

According to the Intergovernmental Panel on Climate Change, the United Nations climate science agency, we are currently living in the hottest period in 125,000 years, CCTV Finance reported. The reason behind this is greenhouse gas emissions caused by burning fossil fuels such as coal and natural gas. The committee says that the concentration of carbon dioxide in the atmosphere is at its highest level in 2 million years and is still rising.

The ice cap is melting at an alarming rate! Greenland is hot enough to wear short-sleeved shorts 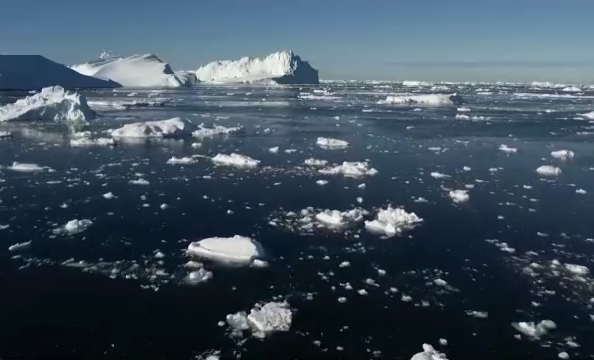 The Greenland ice cap is the second largest in the world, covering an area of nearly 1.8 million square kilometers, second only to the Antarctic ice cap, with an average temperature below 0 degrees Celsius throughout the year. Generally, the melting season of the Greenland ice sheet is from June to early September every year. But unusually warm weather in recent days has led to accelerated melting of Greenland's ice sheet.

Some of the researchers stranded there even played volleyball in their shorts because of the unusual temperatures and soft ice that prevented planes from taking off and landing properly.

Data from the National Snow and Ice Data Research Center shows that between the 15th and 17th of this month, the Greenland ice sheet lost about 6 billion tons of ice per day, enough to fill 7.2 million Olympic-size swimming pools. University of Texas researchers assigned to Greenland said the total amount of Greenland ice sheet melting due to rising temperatures is so staggering that you can even hear the ice sheet melting in front of your eyes.

If the Greenland ice sheet all melted, the global sea level will rise 7.5 meters.

The World Meteorological Organization pointed out on the 19th, recently swept Europe's rare high temperature weather in the future or become the European summer "standard", high temperature and other negative effects of climate change will continue at least until the 60s of this century, the global trend of glacial melting will continue for hundreds of years or even longer.

What business opportunities will come to the European market?

It is worth noting that brick-and-mortar retailers are under enormous pressure as the heat sets in. According to market research firm Springboard, the number of shoppers, or foot traffic, on Britain's high streets fell by 7.3 percent this week compared to last week. Analysts say that if the heat continues, more people will choose to shop online, which may be good news for online retailers.

According to data from the International Energy Agency, Europe's air conditioning penetration rate is only about 5%. In comparison, the United States reaches 90%, Japan has 89%, India also has 6%, and China is 60%.