On Tuesday (April 12) local time, the Kwazulu-Natal province, where the Port of Durban in South Africa is located, experienced the heaviest single-day heavy rainfall in more than 60 years. The record rainfall triggered floods and landslides that hit cities on the east coast of South Africa. Devastating as the death toll rose to 259 in the floods, the port of Durban, one of Africa's busiest ports, also shut down terminals and disrupted major roads and shipping. A large number of containers were washed away by the flood and scattered.

Since 19:30 on April 11, the operator of the Port of Durban, the largest logistics and freight operator in South Africa, "South African Logistics Group Transnet", has suspended operations at its terminals. In a statement, Transnet said, "Due to environmental damage caused by severe weather, limited capacity on certain rail lines and challenges in handling cargo in Richards Bay, shipping has been suspended until further notice. The ship is on standby."

Another announcement was made on the 13th that services on the Natcor rail line will be suspended until further notice due to severe weather conditions. Transnet Freight Rail's engineering team will assess the extent of the damage and, once repairs are confirmed, full operations will resume. Please be aware that this will affect the evacuation and reception of containers due to the disruption of electricity in the city.

Local customers in Durban have been asked to "delay" trucks entering the port to avoid congestion, Reuters reported. Judging from pictures from the scene, multiple Maersk containers have been washed away by the flood.

On the 13th, Maersk issued the latest announcement saying that all berth terminals will resume operations today. It is expected to operate at a lower level of productivity given the restrictions on inaccessibility to the terminal.

Currently, the biggest limitation is the problem of entering the dock:

Roads: "Bay Head Road" is heavily damaged and has cut off all access to and from the pier. Trucks cannot get in or out. No date has been set for the reopening of Bay Head Road.

Rail: Rail services to and from the terminal are currently suspended.

Maersk said its Durban office would be temporarily closed for the rest of the week while cleanup and recovery efforts continued, with some employees working from home and business operations remaining as normal.

Pre-cooling facilities, three of the four pathways have now reopened. The crew is preparing to receive the truck for unloading at the scene. Congestion has grown around the towns of Cato Ridge and Hammarsdale as trucks can't reach the port. The situation is easing though and is expected to improve further today.

Export bookings: Given the very fluid situation, it has been decided to suspend all new Durban loading bookings.

Import: For Durban area and Johannesburg import customers, efforts will be made to complete the shipping plan. With delays expected given rail and road restrictions, Port Elizabeth is being reviewed as an option. 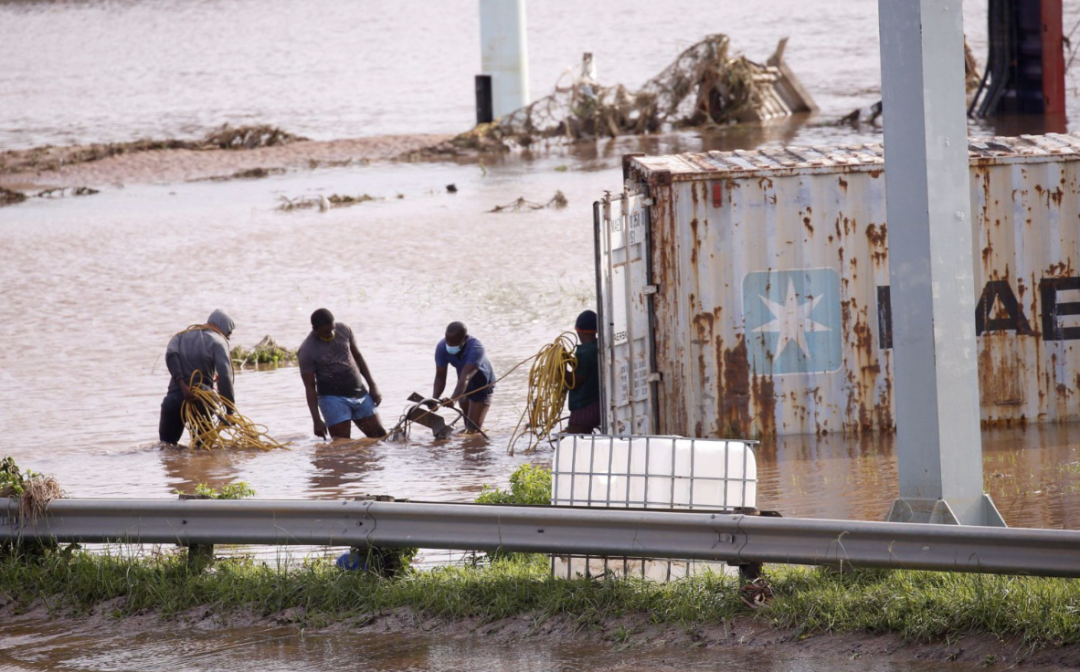 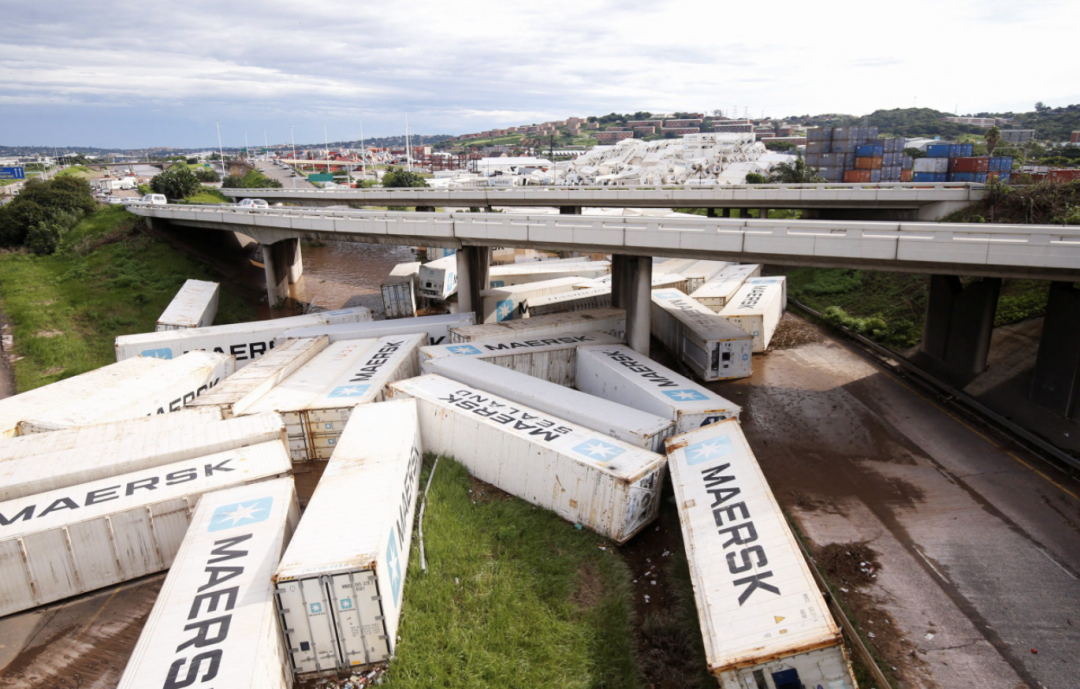 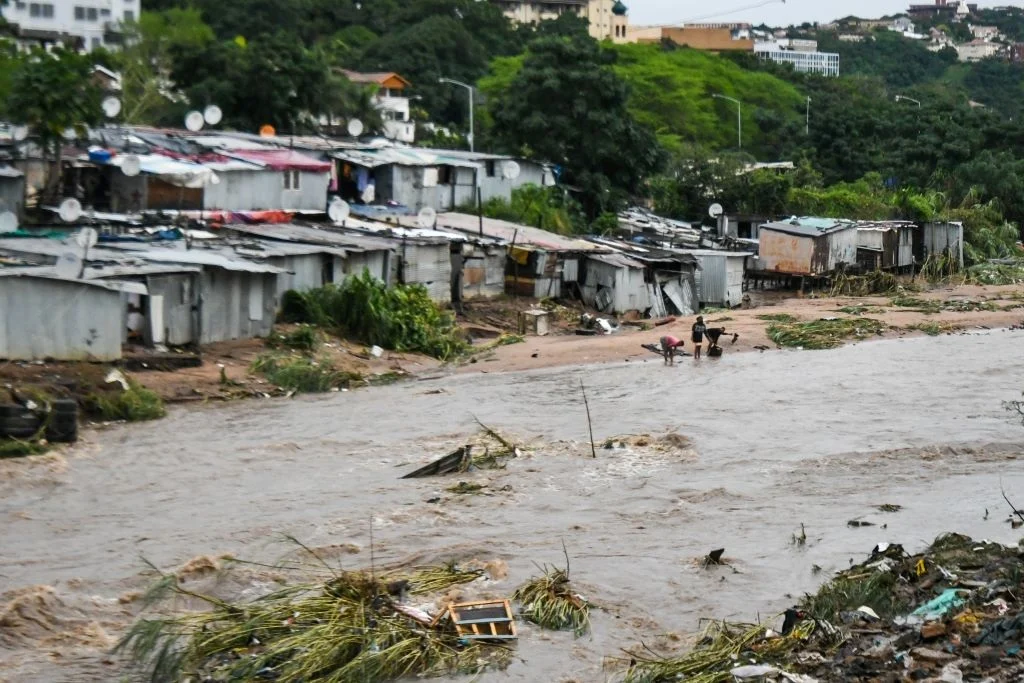 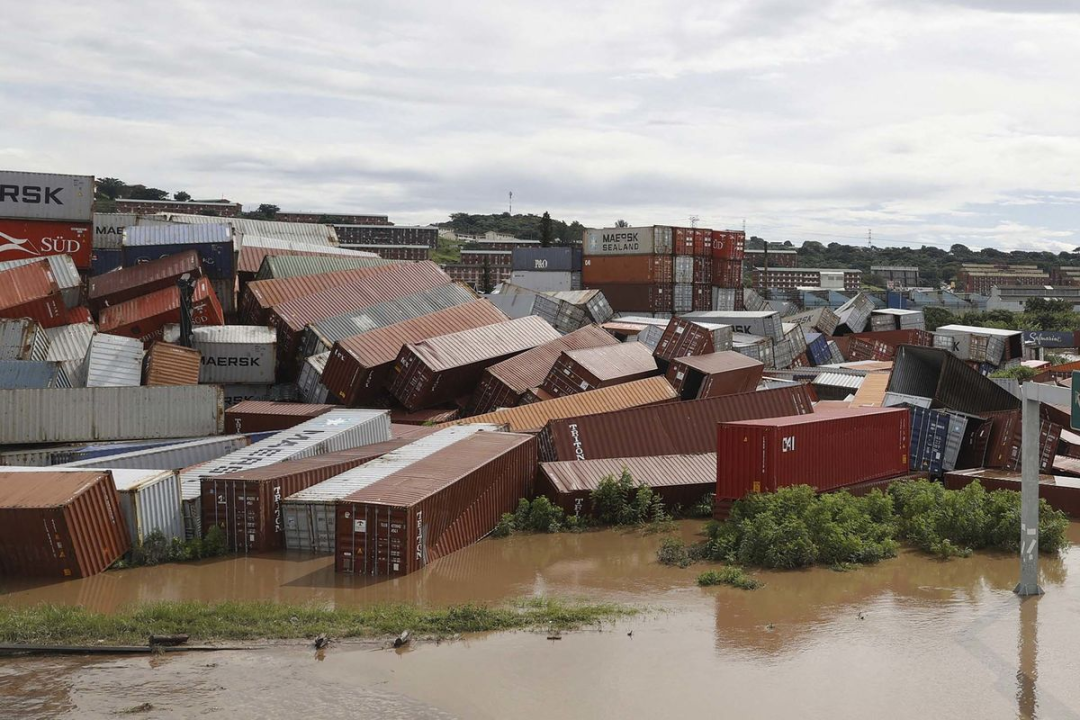 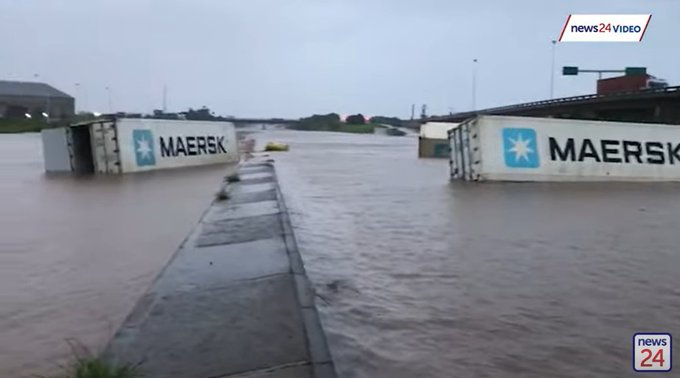 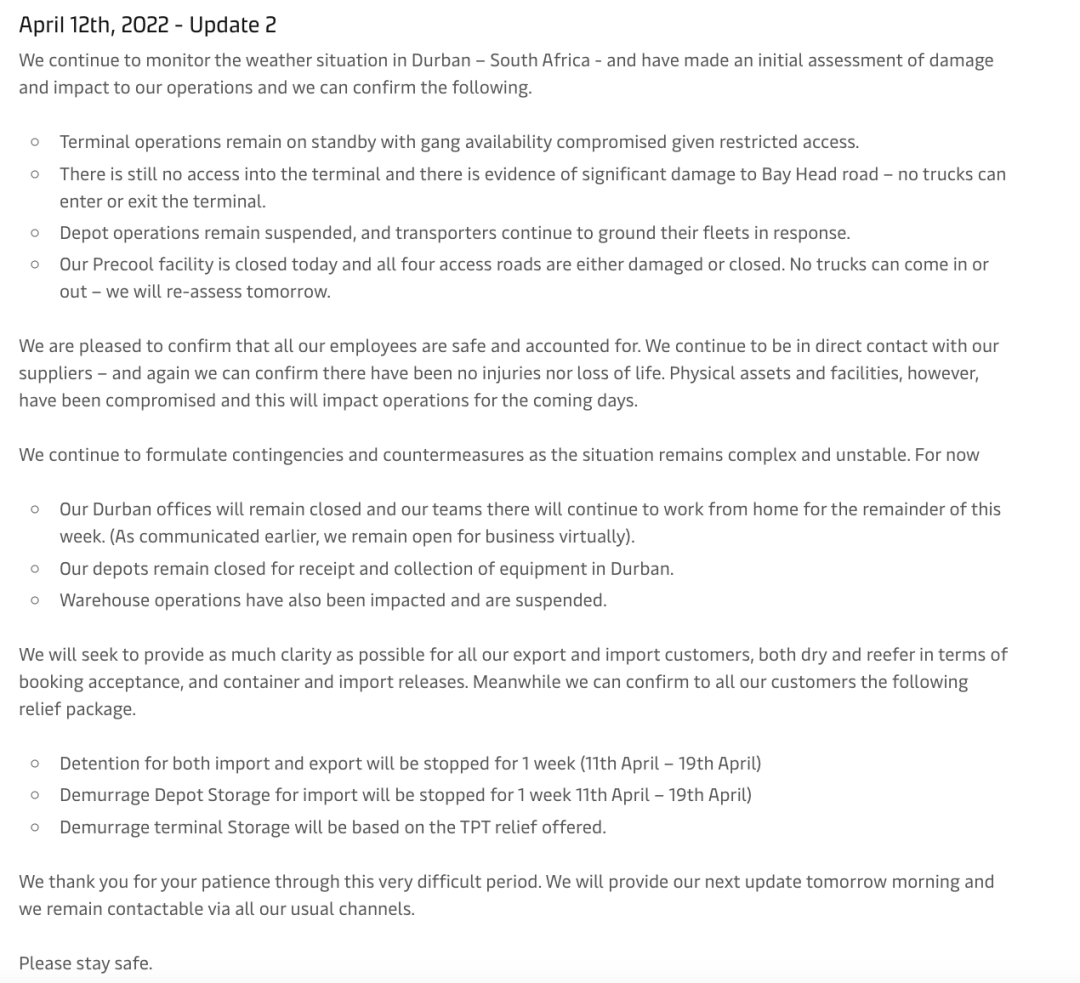 In addition, in order to alleviate a series of impacts brought about by the paralysis of Durban port operations, Maersk specially introduced the following relief plans to customers: exempting all import and export goods from container rental fees for one week (April 11-19); exempting all import and export goods for one week Demurrage charges for demurrage (April 11-19); terminal storage demurrage charges will be waived based on the TPT offered.