Before COVID, with the overall timeliness gap of 3-7 days between the United States and the West, cheap is the first choice for sellers; Matson express ship has become a "luxury" in shipping, and has an absolute voice and market share in the cross-border logistics circle. But it is not without accidents. The overtime ship of Matson has been seriously delayed since it arrived in the port in late December, and it takes 30 days from sailing to unloading. Are there any shipping channels that are relatively affordable and that will not delay too long?

In fact, between express ships and regular ships, there are several shipping channels that can quickly unload ships and quickly pick up containers in the case of a plugged port. There are EMC's HTW service and COSCO's SEAX service (both are fixed-delivery fast ships), as well as COSCO's SEA service, the following STU Supply Chain will introduce you one by one.

What does fixed-delivery express ship mean?

What does fixed-delivery express ship mean?

The fixed-lift express ship is similar to the "VIP service" of the shipping company. The containers of these routes will be stacked in a specific area to ensure that they will not be dumped. They can be loaded and unloaded first, and the brackets will be given priority. There is also a 24-hour appointment-free pick-up service. Worry about the container entering the closed area (we will introduce what is the closed area later), do not have to worry about incurring detention fees, the overall timeliness is more than 5-7 days faster than the regular ship.

Under the current situation that the United States is blocked by ports, and the time for unloading and picking up the container becomes longer, the fixed pick-up is the guarantee to improve the timeliness. I also remind everyone here that the fixed-delivery express ship channel occasionally has the risk of empty shifts.

HTW service is the Evergreen express service from South China to the West Coast of the United States. 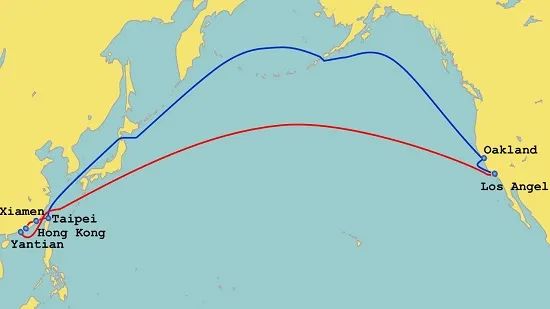 According to the shipping schedule in the above table, the reference time from Yantian to Los Angeles is 15 days, but the average unloading time is delayed by about 5-7 days due to the congestion of Los Angeles Port. At present, the time limit for this route is about 20 days after sailing.

The ships operating this route are all large container ships with a total container volume of more than 10,000 TEU, and the speed of loading and unloading is definitely not as fast as Matson's small container ships (generally within 4,500 TEU). However, the destination port of the HTW route is docked at the ETS (Everport Terminal Services) terminal in Los Angeles. The ETS terminal is a terminal unique to Evergreen, and the unloading can be completed quickly after docking. 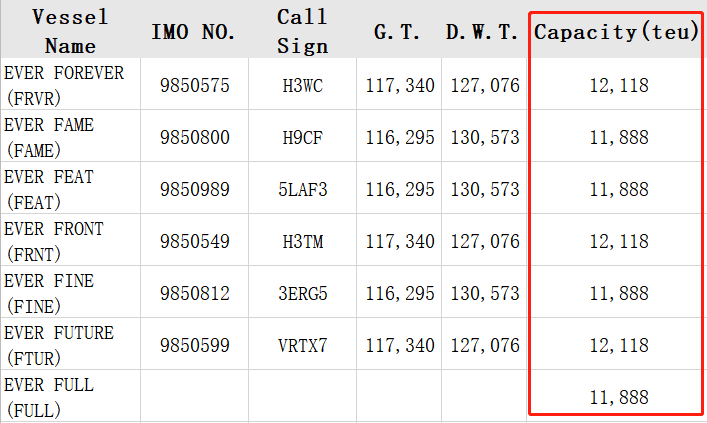 In addition, other route services need to make an appointment to pick up the container after calling at the ETS terminal, but HTW's custom pick-up service does not require special reservation, and can be picked up directly after unloading, shortening the time limit. 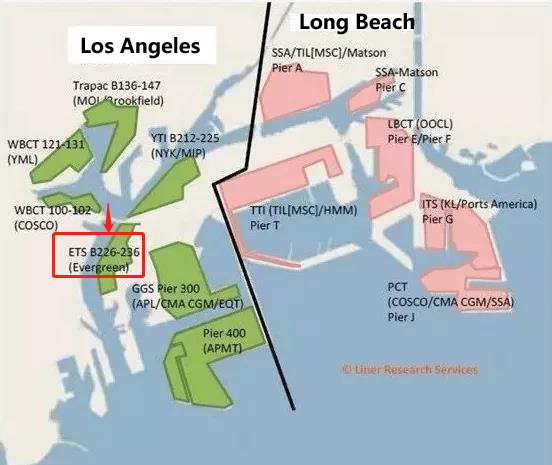 SEAX service is a COSCO express ship service from South China to the West Coast of the United States.

The COSCO SEAX service calls at the WBCT (West Basin Container Terminal) in Los Angeles. The terminal is divided into two areas, one for COSCO (ships on the COSCO SEAX route call in this area), and one for YML (for ships on the star route in the area). 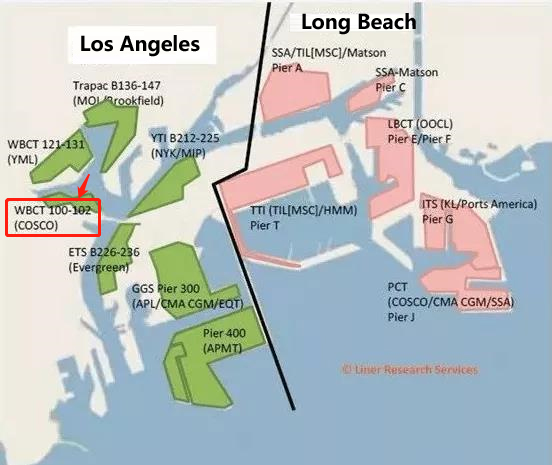 Although SEAX service has the blessing of fixed-delivery service, it takes nearly one and a half months from the start of the ship to the port of Los Angeles. In addition to the port of Saix, the WBCT terminal where SEAX is called is a public terminal, and not only one shipping company unloads the ship at the terminal. , making the arrival time longer.

There is no fixed pick-up service for this route, which is jointly invested by COSCO SHIPPING and OOCL. 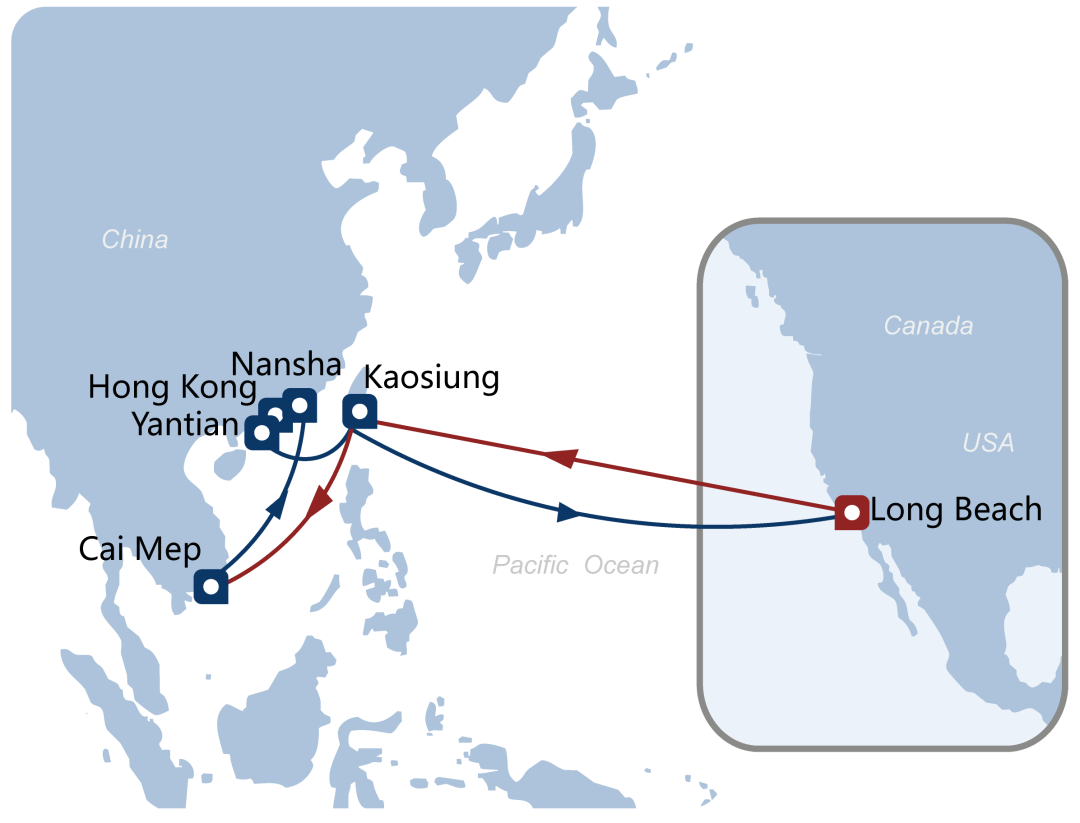 The COSCO SEA service calls at the LBCT (Long Beach Container Terminal) terminal at the port of destination. The LBCT terminal is the most automated terminal in the western United States. In the case of the tight labor force of the western port of the United States due to the epidemic, the fully automated facilities at the terminal will greatly improve the efficiency of unloading and cargo movement. Traditional container terminals can usually only handle 6000-8000TEU per acre, while LBCT can handle 12000-15000TEU per acre. 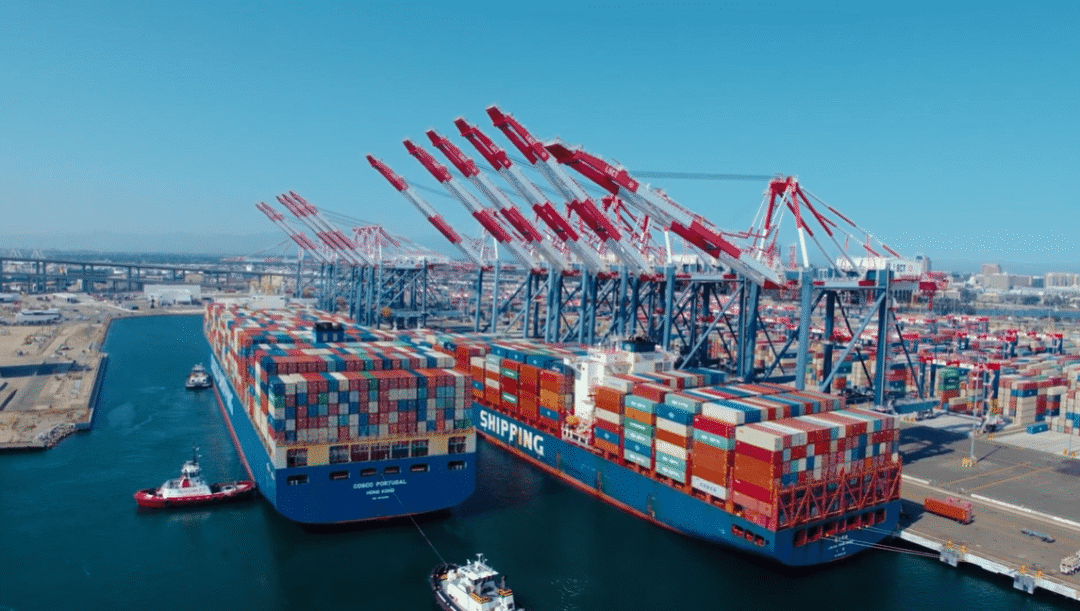 Although the ships of SEA service are almost all large ships with a total container capacity of more than 10,000 TEU, the efficiency of automated terminals makes the timeliness of SEA service stand out. It only takes 20 days on average to arrive at the port after the ship sails, and the timeliness quickly catches up with the overtime ship of Matson. It only takes an average of 6.3 days to pick up the goods after arriving at the port, which is not inferior to the SEAX service with fixed pick-up service.

ZIM express shipping service has three routes to West America, namely ZEX, ZX2 and ZX3. ZEX and ZX2 are the South China Express, and ZX3 is the East China Express.

Most of the ships operating these routes are small ships with a container space of 4,200 TEU. ZIM service calls at the WBCT (YML) terminal in the Port of Los Angeles, USA, and ZIM has two exclusive berths in it. Although there are these two advantages, the terminal is not exclusive to ZIM. In many cases, ZIM's containers also need to wait in a closed area (Per WBCT still in a closed area), and it takes 2-3 months from sailing to picking up. 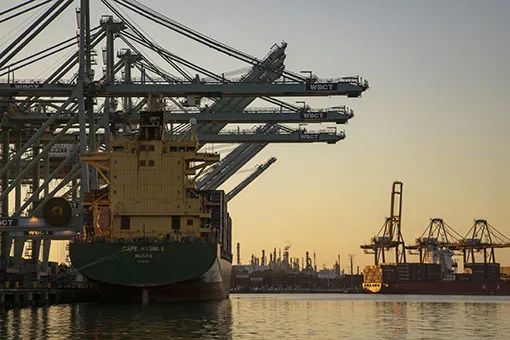 The close area is the operation area of the terminal during the loading and unloading time. Considering the safety and work efficiency, a part of the area is classified as a closed area, and the pick-up business will be opened after the operation is completed.

In the past, there was sufficient space in the container yard, and the speed of unloading and lifting containers was fast, and the number of layers of container stacking was relatively low. At present, due to the low operation efficiency of the port in the United States and the West, lack of manpower, lack of frames, and lack of drivers, the storage yard space is seriously insufficient. In order to utilize the limited space, the cabinets are stacked very high and dense, and the efficiency of rummaging for containers is greatly reduced. Coupled with the shortage of brackets in the wharf, the cabinets without brackets will always be piled at the wharf, but the new cabinets will continue to be unloaded at the port, and the cabinets will continue to be stacked, resulting in slower loading of the cabinets.

Why is it rarely heard that the cabinets of ZIM and Dingti will enter the closed area?

The small container ship used by the Matson express ship has a fast unloading speed and can unload a ship in half a day. There is a 24-hour no-reservation locker service for Dingti Express, and there are sufficient brackets. So you will not feel the time to enter the closed area.

ZIM added an incentive in December 2021 to expedite the liquidity of containers at the WBCT terminal in Los Angeles. In order to attract truck drivers to the WBCT terminal, ZIM has created a "dedicated transfer channel" at the terminal. Truck drivers do not need to make an appointment to pick up the goods in advance. We will wait and see whether the timeliness of ZIM improves in the future.

Amazon's price involution is becoming more and more serious, and the freight rate in 2022 has clearly been high. It is expected that COSCO SEAX/SEA and EMC HTW, which are relatively stable and fast among low-priced general ships, will also become the "sweet pastry" of sellers this year. . One of the important reasons why these line services can have the last laugh during the epidemic is that they are backed by the "backer" of the terminal, and ZIM does not have the capital to compete with other shipping companies, which is his unspeakable scar in terms of timeliness.