Decarbonization and Transformation of Shipping Industry

Green finance is important for decarbonization transformation of shipping industry 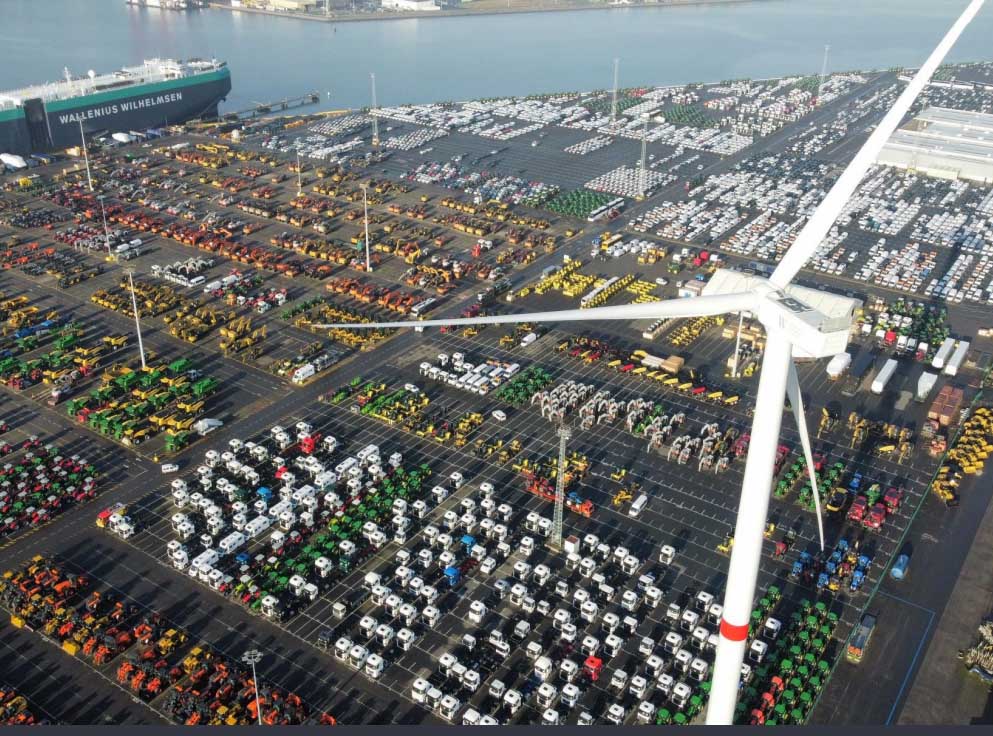 The largest came in February 2020 when Maersk secured a $5 billion sustainability-related revolving credit facility through a syndicate of 26 selected banks. The second largest was a "Transformation Linked Loan" (TLL) between Japanese shipping giant K Line and a syndicated lender arranged by Mizuho Bank (MHBK), with a term of 5 years and an amount of 1,100 100 million yen (approximately $991 million).

Since May 2018, Japanese shipowner NYK Line issued the first green bond in the shipping industry, and the development of green finance in the shipping industry has grown by leaps and bounds in the past two years. According to Clarkson's statistics, international shipowners completed 7 green finance-related projects in 2020, which will increase to 22 in 2021, and 8 green financings have been completed in the first half of 2022.

· Green finance typically finances assets with a clear purpose for income. Ships need to meet specific criteria outlined by organisations or standards such as the Climate Bonds Initiative, or the Green Shipping Initiative. This usually means that its fleet AER (Annual Energy Efficiency Ratio) or EEOI (Energy Efficiency Operating Index) needs to be below a defined decarbonization trajectory.

· Sustainability-linked finance is characterized by a commitment by the borrower or issuer of the bond to achieve substantial improvement in one or more sustainability-related key performance indicators (KPIs) in the short to medium term. The interest rate of the financial instrument is related to whether the KPI is met.

To support the green transformation of the shipping industry, the Poseidon Principles, a global initiative for ship finance launched by 11 major shipping banking institutions in June 2019. The principles establish a common baseline for quantitatively assessing and disclosing whether financial institutions' loan portfolios meet adopted climate targets. Its goal is to encourage shipowners to buy or build low-carbon ships by issuing incentive loans.

At present, the signatories of the Poseidon Principles have expanded to 29, collectively representing about US$185 billion in shipping finance share, which has exceeded more than 50% of the global ship finance portfolio.

On August 29, South Korea's Hyundai Heavy Industries announced that its self-developed cyclone sail "Hi-Rotor" received Design Approval from the Korea Classification Society (KR). It is claimed that "Hi-Rotor" can reduce energy consumption and emissions for ships by about 6-8%.

On August 30, e1 Marine announced that its M-Series methanol-to-hydrogen generators have received Approval in Principle (AiP) from the Maritime Administration of the Republic of the Marshall Islands (RMI) for offshore applications on any vessel type. Earlier in May, the equipment had been awarded Lloyd's Register AiP. 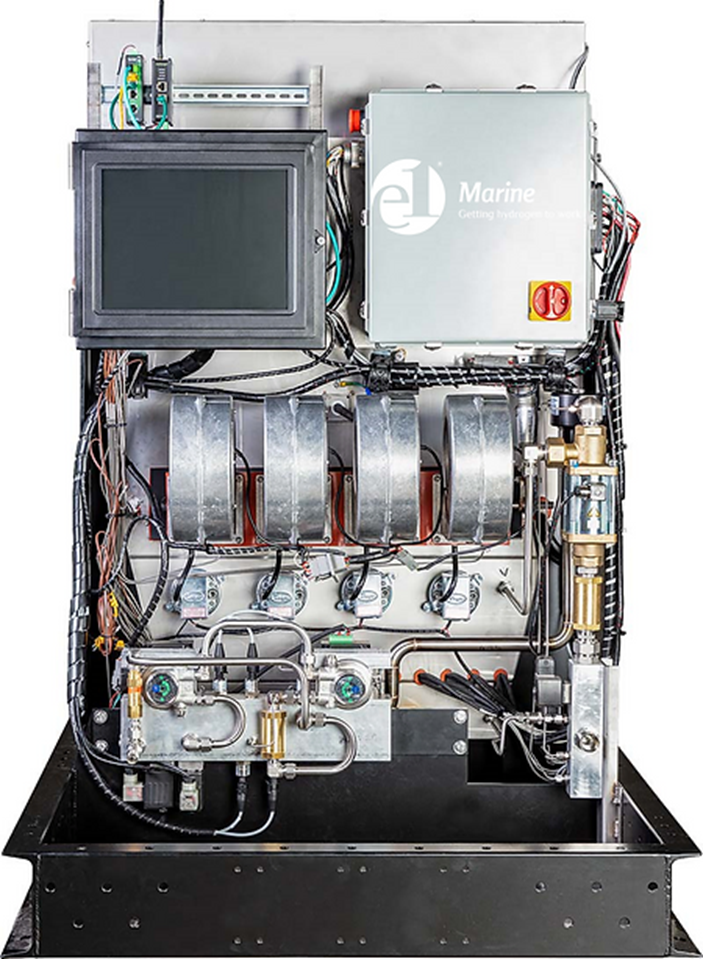 On August 30, the LNG dual-fuel shuttle tanker ordered by Knutsen NYK Offshore Tankers AS (KNOT), a subsidiary of NYK Line, was delivered at Daewoo Shipbuilding & Marine Engineering Co., Ltd. The vessel has been named "Sindre Knutsen." Like sister vessel "Frida Knutsen", which was delivered on August 2, the vessel is a dual-fuel shuttle tanker and will be chartered to a subsidiary of Ente Nazionale Idrocarburi SpA (ENI). ENI Trade & Biofuels SpA, undertakes oil transportation between the North Sea and the Barents Sea. On August 30, French sailing cargo company TransOceanic Wind Transport (TOWT) announced that it has signed a contract with French shipyard Piriou to build a second 81-meter cargo sailboat, scheduled for delivery in spring 2024.

It is reported that the ship will have a cargo capacity of 1,100 tons. In addition to sail propulsion, the ship is also equipped with two turbocharged four-stroke marine diesel engines. 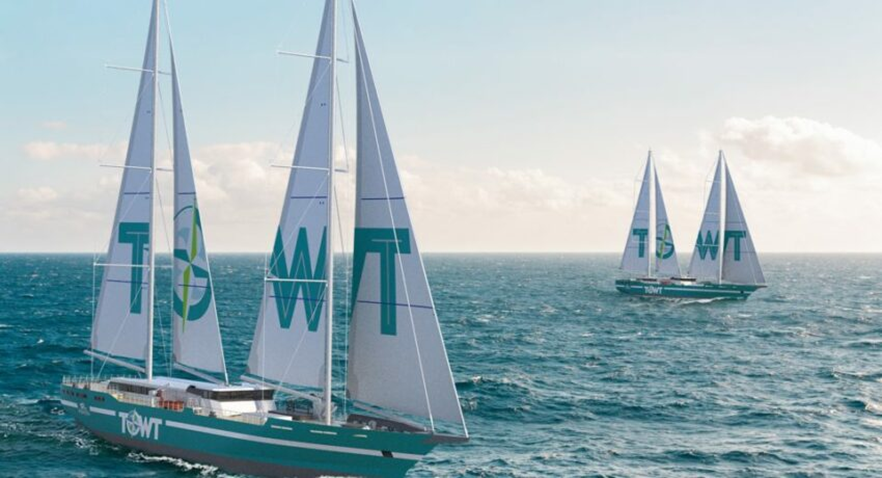 Funded by the Korean Ministry of Oceans and Fisheries, the project has a total development budget of 23.5 billion won ($17.3 million). The goal is to commercialize a South Korean-made tugboat powered by hydrogen fuel cells by 2026. Currently, DSME has developed a battery-hybrid propulsion system based on hydrogen fuel cells with power up to 3 MW. 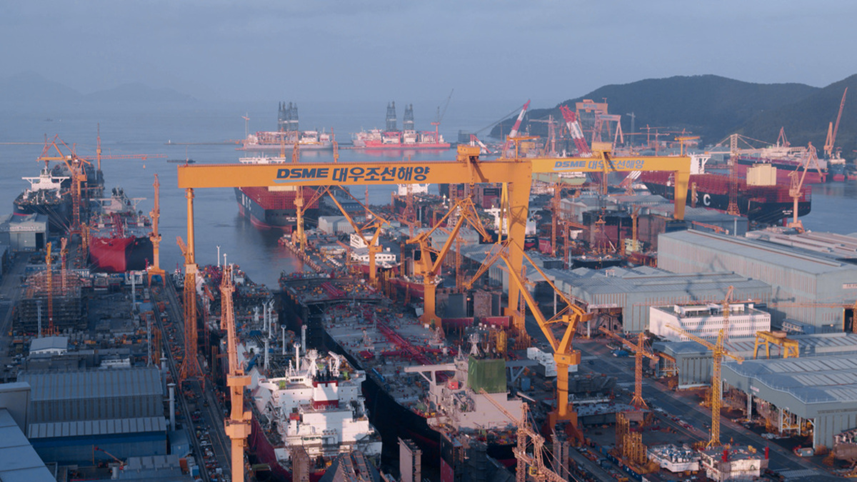 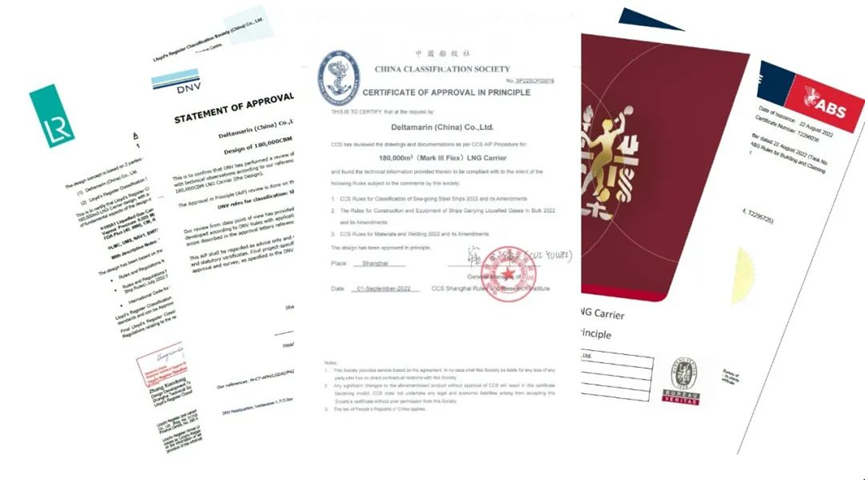 On September 2, the 158,000-ton LNG dual-fuel tanker No. 2 built by Guangzhou Shipyard International, a subsidiary of China Shipbuilding Corporation, for Singapore EPS Company was signed and delivered, marking the successful completion of the world's first and largest LNG dual-fuel Suezmax tanker project in South China. official. 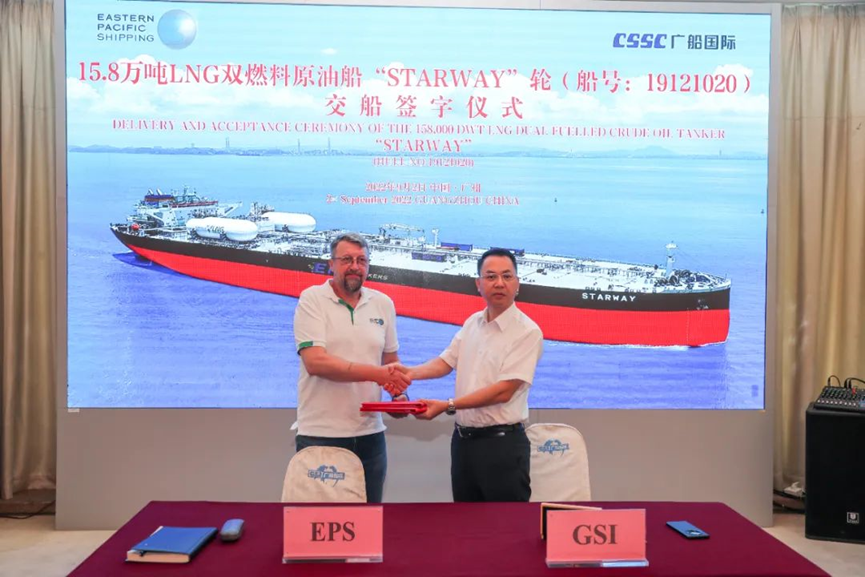 According to Nanfang Daily, on September 2, the first batch of LNG-powered retrofitted ships in Foshan was successfully completed and delivered in a centralized manner.

Up to now, 6 LNG-powered ships in Foshan City have completed the transformation, and the follow-up work of 14 ships is progressing as planned, and it is expected to be completed by early next year. 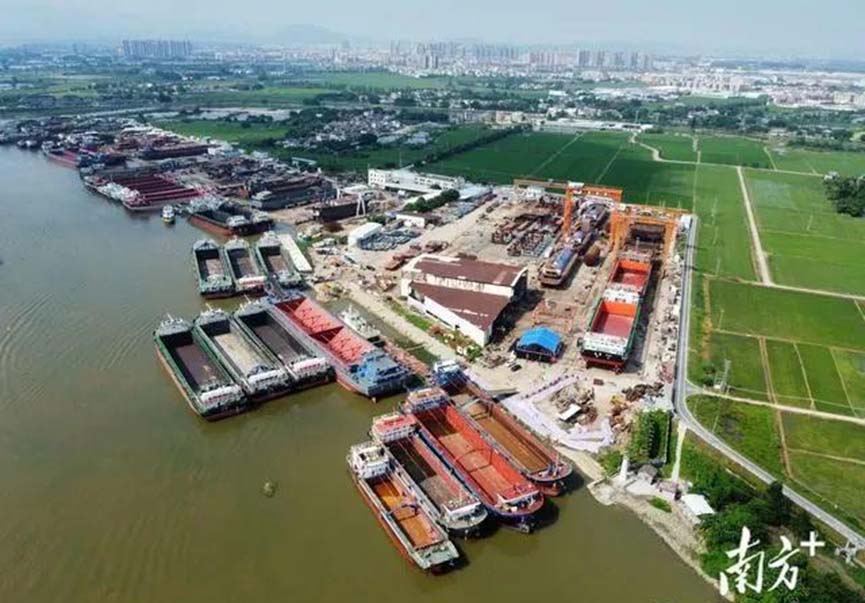 On September 1, the “CIMC Runqing 107” liquefied natural gas (LNG) single-fuel powered cement tanker, invested and constructed by CIMC Shilianda and Zhaoqing Runqing Shipping, was completed and delivered. This is a demonstration project for the green development of inland shipping in Guangdong Province. The first LNG new energy cement tanker built. 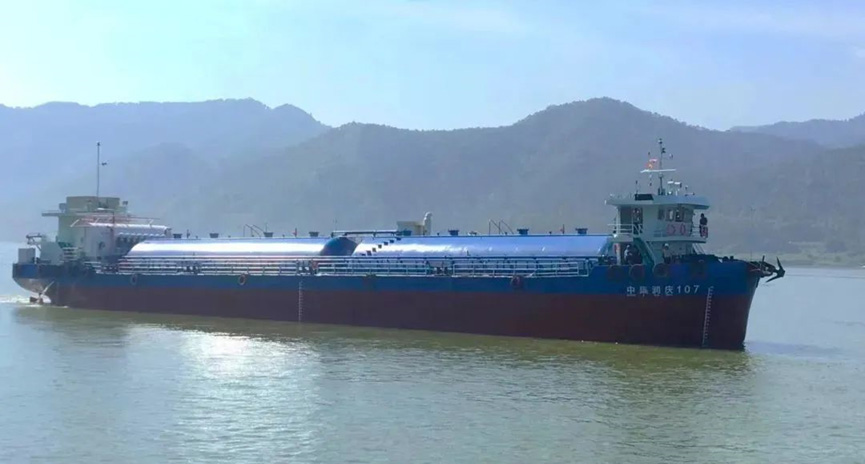 New research shared by ship design firm C-Job Naval Architects on Aug. 30 suggests that nuclear energy could be used to power ships in the future. According to the company, there have been some interesting developments in nuclear technology that should be considered for future maritime applications. The study determined that large ocean-going ships have the greatest potential for nuclear propulsion.

On 30 August, Bureau Veritas (BV) issued a new "biofuel ready" mark to support the wider deployment of biofuels in the shipping industry. The BV said the mark will help the maritime industry address key challenges related to the use of biofuels on ships, providing requirements to ensure ship safety and environmental compliance. 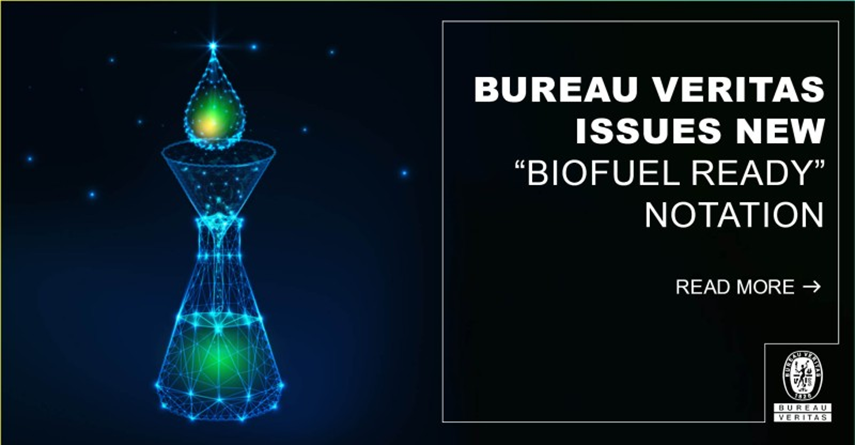 Proman Stena Bulk, a joint venture (JV) between Proman, the world’s largest methanol producer, and tanker owner Stena Bulk, announced today that their two fully operational methanol fuel tankers have become the first vessels to be bunkered with methanol in Ulsan, South Korea, where During this period, Stena Pro Patria and Stena Pro Marine were bunkered with more than 2,000 tons of methanol. 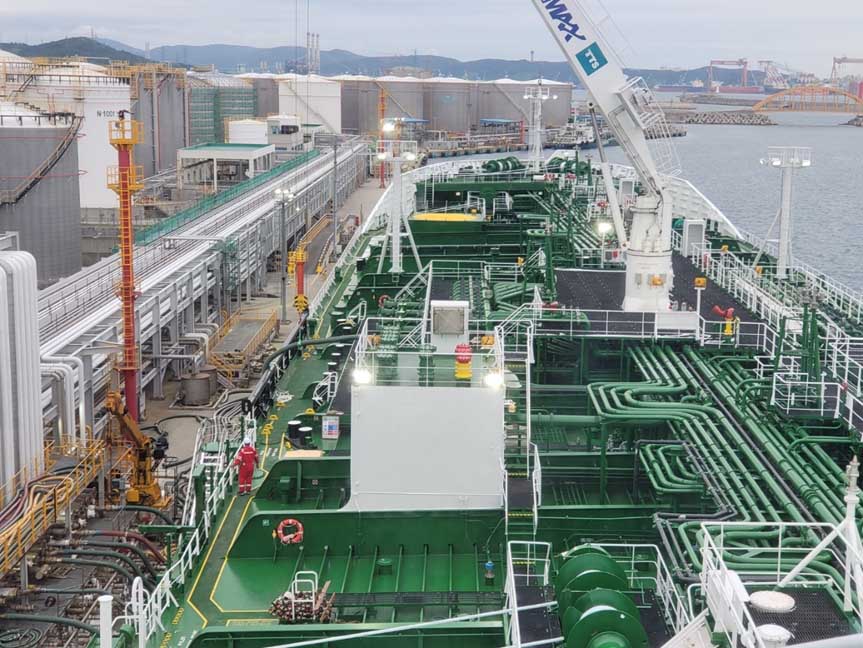 On August 31, ZIM Integrated Shipping announced the signing of a ten-year, over $1 billion marine liquefied natural gas (“LNG”) sales and purchase agreement with Shell, which will provide fuel for 10 LNG dual-fuel container ships that will The vessel will be deployed on ZIM's flagship route, ZIM Container Service Pacific (ZCP) (East Asia-East America). The ten 15,000TEU container ships are expected to be operational between 2023 and 2024.

On September 2, Pacific Basin, a dry bulk shipping company that is not based in Hong Kong, announced the completion of its first biofuel trial aboard its 2015-built Handy bulk carrier Ince Point. The trial was successfully completed in August, and details of the fuel supplier and type of biofuel were not disclosed. 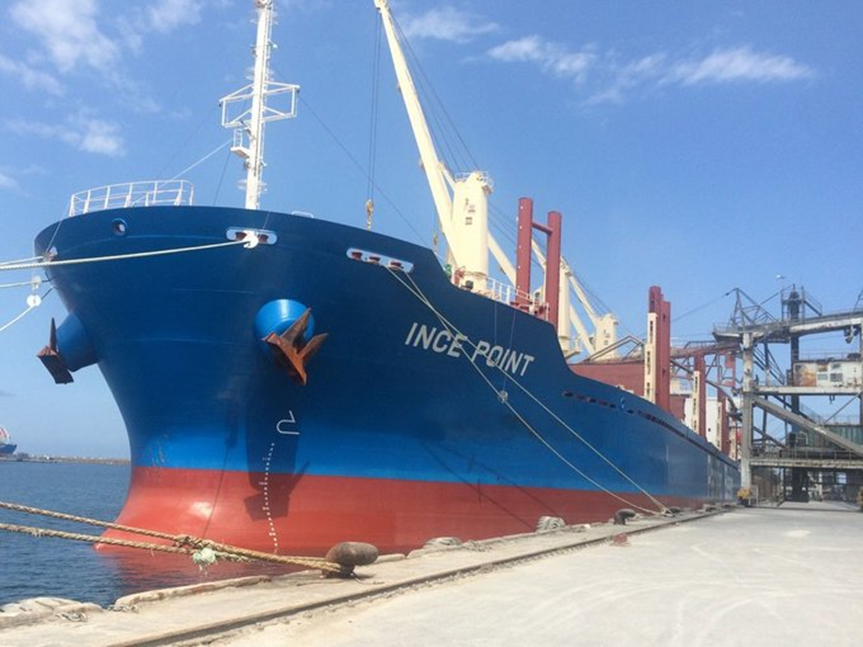 On September 2, ferry operator Stena Line announced a partnership with DFDS, energy companies Ørsted, Liquid Wind and the Port of Gothenburg, Sweden to build an electricity-to-methanol hub. FlagshipONE, the project in late development and nearing a final investment decision, will be the largest e-fuel facility in the world, producing 50,000 tons of electro-methanol annually.

Researchers from Austria and Sweden simulated the pre- and post-combustion carbon capture potential of a ferry burning renewable methanol and hydrogen, and concluded that both systems are cost-effective.

On August 30, HAV Hydrogen, a subsidiary of Norway’s HAV Group, announced that it will launch a deck-based marine container hydrogen energy system. As a self-contained, scalable power supply, it can be set up to output 1,000 kW from a 20-foot standard container. And by using larger containers, or combining multiple containers, a larger capacity energy system can be provided. On August 30, Blue World Technologies announced that Breakthrough Energy Ventures (BEV), founded by Bill Gates, together with Vaekstfonden (Danish sovereign investment fund), Deutz AG, and the company that completed the investment in December 2021, became Blue World Investor in Technologies’ €37 million Series B round.

The Series B funding will be used to scale up fuel cell production and invest in the development of methanol-powered fuel cell applications for the maritime sector. By the end of 2021, the company will outsource all the production of fuel cell core components and is currently in the pre-mass production stage. 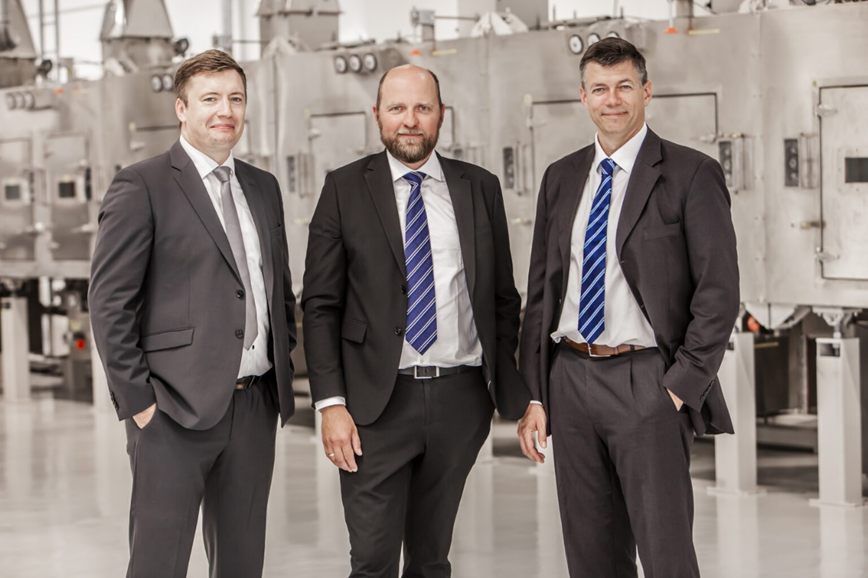 On September 1, Swiss engine design company WinGD and Korean engine manufacturer HSD Engine launched a joint development project (JDP) to advance the development of WinGD methanol-fueled large-bore engines. The goal is to deliver engines capable of running on carbon-neutral green methanol by 2024, providing shipowners with a power solution that will enable them to meet the IMO's 2050 targets and achieve net-zero emissions with the next generation of ships. Norwegian company Amon Maritime has announced that it has signed a commercial agreement with New York-based Amogy to “accelerate the adaptation of ammonia-powered solutions to decarbonize the maritime industry”.

Amon Maritime has previously launched a number of projects related to the offshore application of ammonia fuel. These include Viridis Bulk Carriers, launched in partnership with Navigare Logistics and Mosvolds Rederi, to provide a zero-carbon option for offshore bulk cargoes; and Azane Fuel Solutions, launched with Econnect Energy, to create scalable ammonia bunkering facilities.

The plan with Amogy is to "identify ways to deliver scalable, decarbonized power solutions to the shipping industry through pilot and full-scale commercial projects". Belgian companies Fluxys, Advario Stolthaven Antwerp and Advario Gas Terminal have joined forces to study the feasibility of building an open, green ammonia import terminal in the port of Antwerp-Bruges, with the goal of having the terminal operational by 2027. 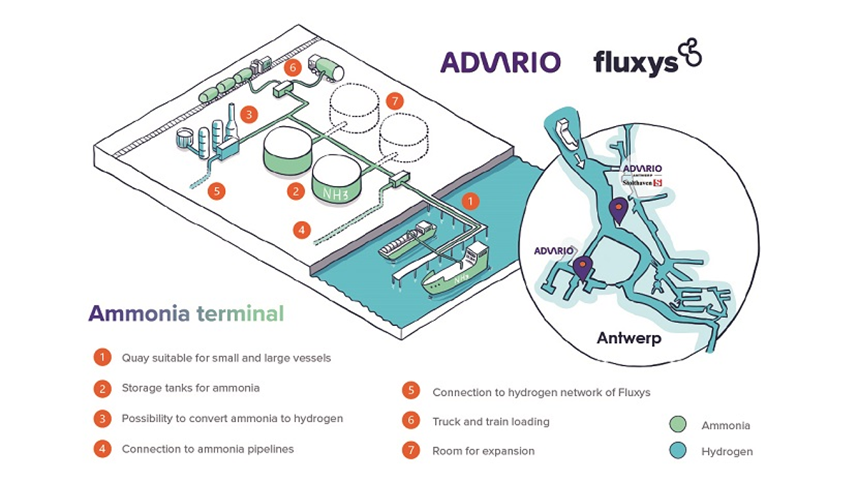 In May, the company signed a $555 million sustainability-related term loan with a consortium of banks. Refinancing the previous nine VLGCs, including the third and fourth newbuilds Avance Rigel and Avance Avior. In August, the company signed a sale and leaseback agreement with BOCOM Leasing for a total of US$135 million for the fifth and sixth newbuildings, Avance Castor and Avance, scheduled for delivery in the fourth quarter of 2023 and the first quarter of 2024. Pollux provides financing.

On August 30, Kongsberg Maritime announced the launch of EcoAdvisor, an intelligent dynamic decision support system for optimizing a range of vessel operations.

On 31 August, G2 Ocean, a joint venture between Gearbulk and Grieg Maritime Group, the world’s largest exposed shipowner, announced that it is rolling out a new carbon offset scheme to its customers, enabling customers to choose to fund one or more climate projects. to digitally offset the emissions of its cargo. G2 Ocean customers will be able to participate in the carbon offset program through the company's digital customer platform, MyG2.

On August 29, Northern Lights, a joint venture between energy giants Equinor, Shell and TotalEnergies, announced an agreement with Yara of the Netherlands to transport and store carbon dioxide (CO2) from its ammonia and fertilizer plants. The deal is the first commercial agreement signed by Northern Lights, and the first in the world for the transport and storage of carbon dioxide across borders.

On August 30, Pacific Environment said Amazon announced it would adopt green hydrogen to decarbonize its operations starting in 2025. The initial contract will power 30,000 forklifts or 800 heavy-duty trucks. Although the announcement mentioned shipping, Amazon did not explicitly commit to when it would green its shipping operations.

On August 26, the Clean Arctic Alliance, a group of 20 international non-profit organizations, announced that it had written to the ministers of Norway, Denmark, Iceland, Greenland and the Faroe Islands, proposing a series of domestic and international actions to quickly launch green shipping in the Arctic waters. Corridor construction. 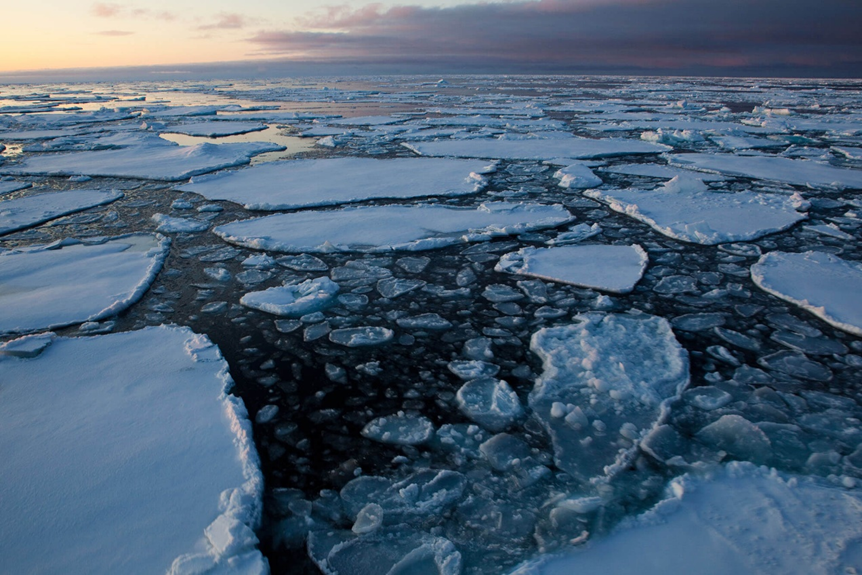 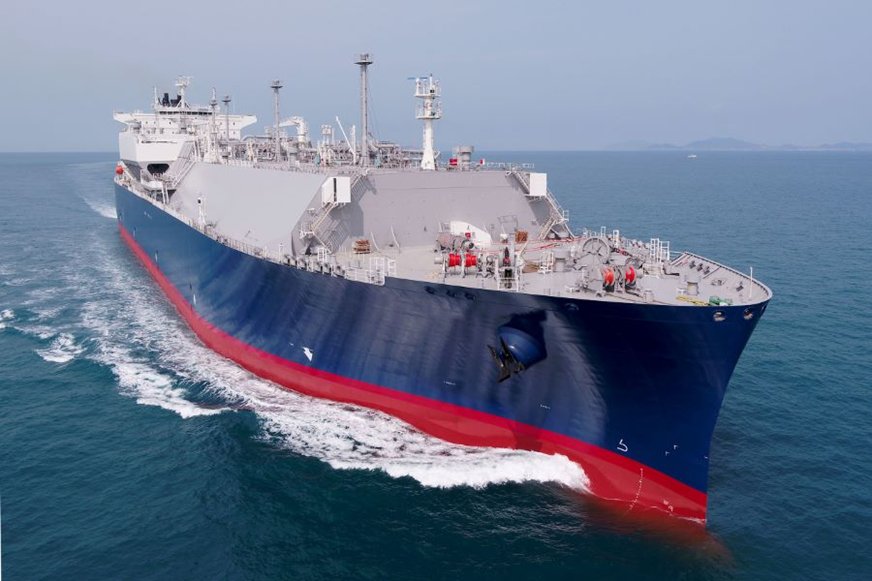 On September 1, Bureau Veritas (BV) signed a Memorandum of Understanding (MOU) with the Maritime and Port Authority of Singapore (MPA) and a Letter of Intent (LOI) with the Singapore Maritime Institute (SMI) to facilitate research and development and joint ventures. Industry projects, including R&D and joint industry projects related to digital classification services, smart shipping and maritime decarbonisation, and the development and growth of maritime talent and expertise in Singapore. 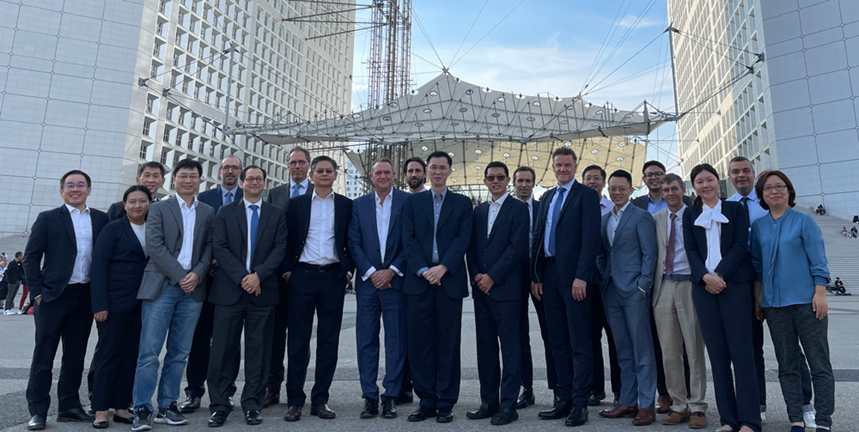