In May 2022, the South Asian country of Sri Lanka defaulted on its debt for the first time. The government was subsequently granted a 30-day grace period to pay $78 million in unpaid interest, but ultimately failed to do so. This not only affects Sri Lanka's economic future, but also raises the question of which countries around the world are at risk of default. 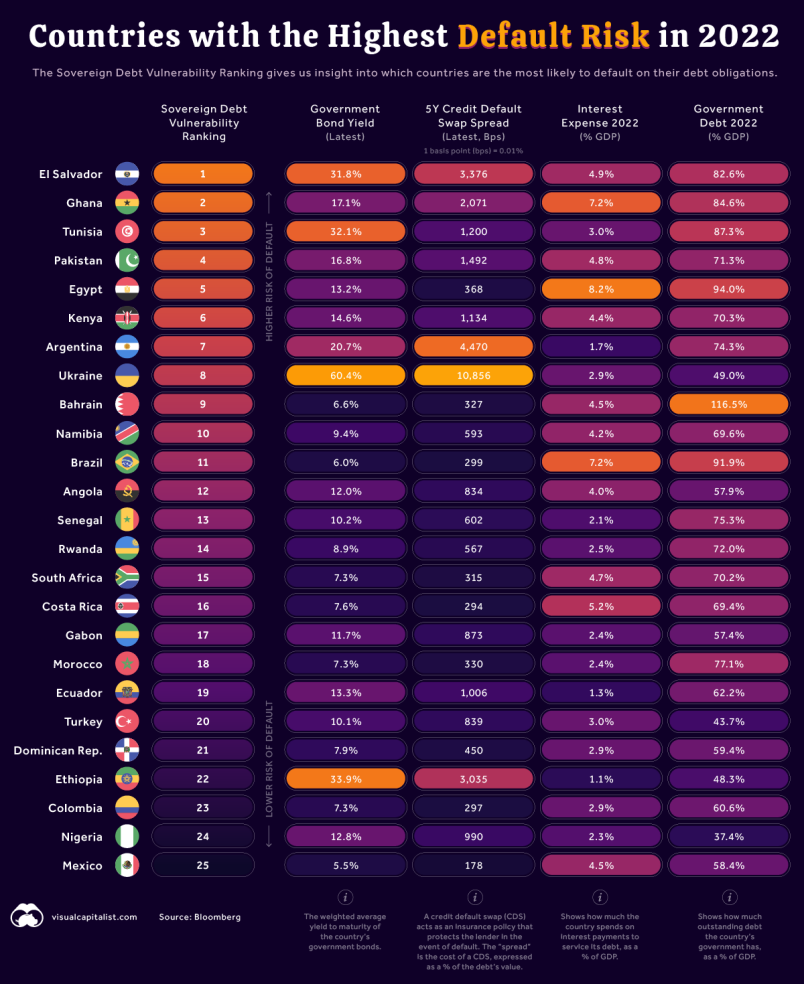 It is understood that the sovereign debt credit rating issued by Bloomberg is a comprehensive measure of a country's default risk based on four basic indicators: government bond yields (the weighted average yield on the country's dollar-denominated bonds), five-year credit default swap (CDS) spreads, interest expense as a percentage of GDP and government debt as a percentage of GDP.

Recently, the International Monetary Fund (IMF) warned again on July 16 that price increases and economic slowdowns will hit the most vulnerable people and developing countries in particular hard, the reference news website reported on July 17, citing Spain's "The Economist" website. More than 30% of emerging and developing countries are in or on the verge of debt distress. The proportion of low-income countries in this state is 60%. At the same time, as financial conditions tighten and exchange rates depreciate, debt service will become a heavy burden that will be unbearable for some countries.

The tightening of borrowing conditions will directly affect the economies of all countries, and countries will be forced to pay higher interest rates on their public debt to attract investors to continue buying their bonds, the report said. However, this increase in fixed-income securities is likely to be impractical for countries that lack the ability to pay their debts.

Repayment of dollar-denominated debt will become more complicated as the dollar has appreciated in recent months. Countries such as Russia, Sri Lanka and Lebanon have already defaulted on their debts to investors this year, and a dozen more are likely to join the ranks in the coming months, notably, but not limited to, El Salvador, Ghana, Egypt, Tunisia and Pakistan, according to the report.

According to media reports, 19 countries are at risk of default and may owe as much as $237 billion, a figure equivalent to 17% of the foreign debt of emerging countries denominated in dollars, euros or renminbi.

In recent weeks, whenever market participants discuss which global economy may follow in the footsteps of Sri Lanka, Pakistan has also become one of the most frequently mentioned options. Pakistan's finance minister recently said that Pakistan has been on the verge of default in recent weeks.

Pakistan, with a population of 220 million, is also caught in a spiral of rapidly shrinking foreign exchange reserves and soaring inflation so far this year. Pakistan's foreign exchange reserves have plummeted by nearly half since August of last year. The country is announcing a new 10 percent tax hike on large businesses for a year to raise $1.93 billion to meet the core requirement of IMF financial assistance - to improve the government's inability to make ends meet.

At the end of May, the Pakistani government suspended fuel subsidies and fuel prices rose by 90 percent. in June, Pakistan's year-on-year CPI rose by 21.3 percent, the highest level in 13 years. A senior Pakistani government minister even asked nationals to cut back on tea to ease the country's import burden.

International credit rating agency Fitch last Tuesday has adjusted Pakistan's credit rating outlook from stable to negative, and said this adjustment is based on the deterioration of Pakistan's external liquidity situation. Affected by multiple negative, Pakistan rupee exchange rate against the U.S. dollar, last Tuesday intraday once fell to a record low of 224 rupees to 1 U.S. dollar.

Compared to other countries that are also facing the risk of default, the market is more pessimistic about the prospects of El Salvador, which is obviously inseparable from El Salvador's President Bukele (Nayib Bukele). A small Central American country with a population of less than 10 million, El Salvador stunned the market last year by fiat-currencyizing bitcoin.

Since the young president took office, he has introduced a series of surprising initiatives. Last September, after announcing the fiatization of bitcoin, Buerkle began publicly using government coffers to buy bitcoin. Yet the price of bitcoin topped out last November. Since the beginning of the year, as bitcoin has gone lower, Salvadoran government debt has become one of the worst performing sovereign bonds in the world. So far this year, El Salvador's bonds due in 2027 have plunged, trading down 32 cents to 28 cents. This bond price also touched a record low of 26.3 cents last Friday.

So far, Buerkle's "official coin speculation" account has also lost about 48%. Although Bucher himself downplayed the loss, but his "speculation" operation failure has exacerbated the country's debt crisis, but also make the market more worried about the country's policy stability.

The World Bank, the IMF and other international financial institutions will find it more difficult to help El Salvador after it fiatizes its currency, as the IMF suggested earlier this year that the country abandon fiat currency, but was rebuffed.

However, international investment bank Morgan Stanley noted in a report last Tuesday that the market may have overestimated El Salvador's debt default risk, and they are now ready to buy Salvadoran Treasuries.