At around 0015 UTC on March 13, a 12,118 TEU container ship named "EVER FORWARD" of Evergreen ship runs aground in Chesapeake Bay channel shortly after leaving the Port of Baltimore. The container ship, which was loaded with Chinese cargo, is still stranded as of now and its schedule has been delayed. 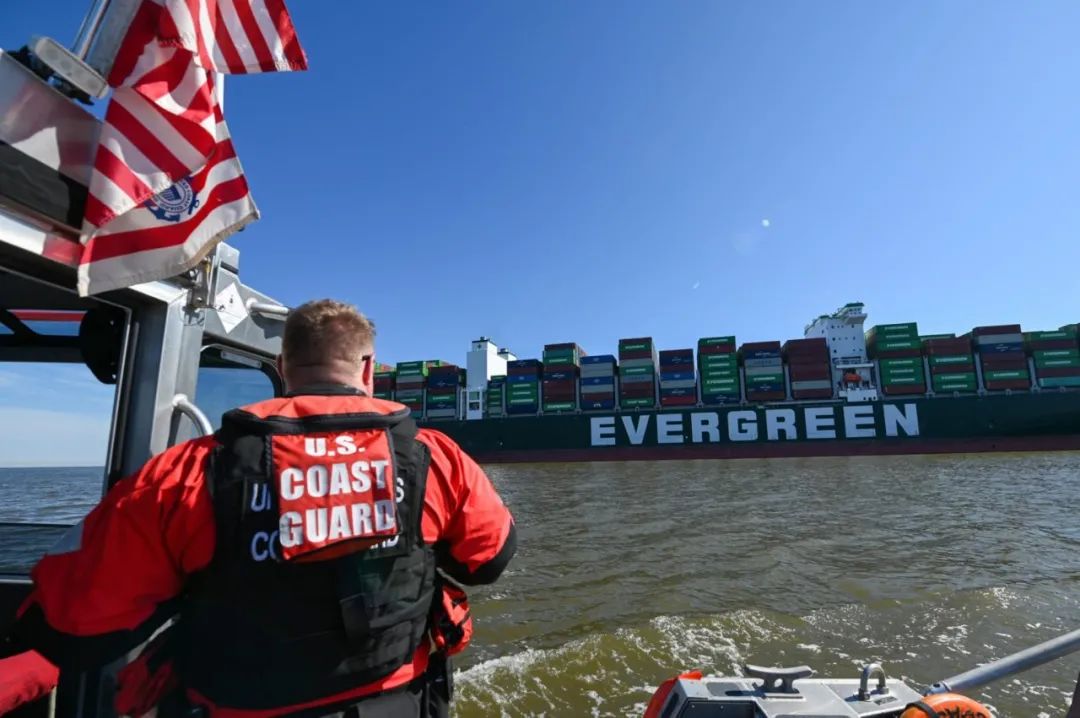 According to the vessel tracking system (AIS) data, the Hong Kong-flagged, 13-meter draft EVER FORWARD ran aground near Gibson Island on its way from the Port of Baltimore Seagirt Terminal to the Port of Norfolk, Virginia. An animation of the ship's track shows that it was traveling normally at about 12 knots at the time of the incident. Live AIS feeds from Monday showed that at least two tugs were in its vicinity at the time to help get it out of the ground.

According to the Maryland State Administration sources, "EVER FORWARD" although aground, but does not affect other ships in and out of the Baltimore port. Attempts are being made to get the cargo ship out of trouble, and rescue is ongoing.

The container ship "EVER FORWARD", mainly serving Asia to the US East route, is owned by Evergreen Hong Kong and will only be put into operation in 2020; it is also the fourth of eight 110,000-ton container ships ordered by Evergreen Marine from Samsung Heavy Industries in Korea: 333.96M, Beam:48.4M, Capacity:12118TEU, built in 2020, flying Hong Kong flag.

Last year, Taiwan Evergreen Marine's 400-meter-long "Ever Given" was stuck in the Suez Canal and ran aground for nearly a week, causing over 400 ships to be unable to pass, resulting in huge economic losses and shocking the world. Now almost one year anniversary, Evergreen Marine has another "Ever Given" stranded.

"EVER FORWARD" is a vessel deployed by Evergreen on the "AUE (Asia-U.S. East Coast Service (AUE))" route from Asia to the East Coast of North America. 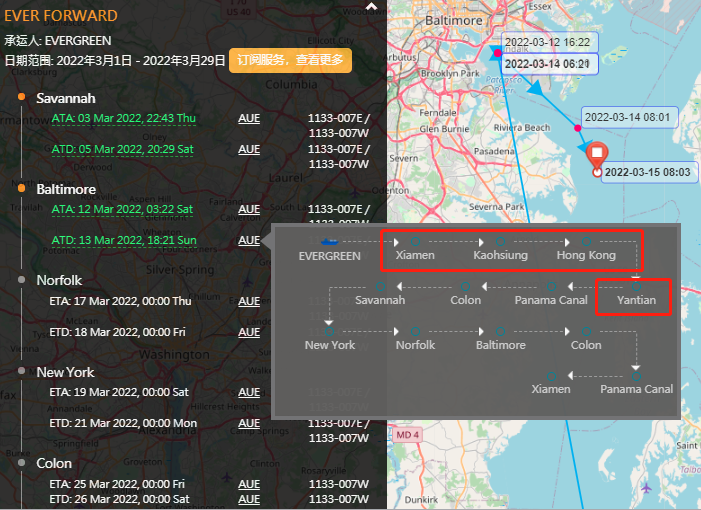 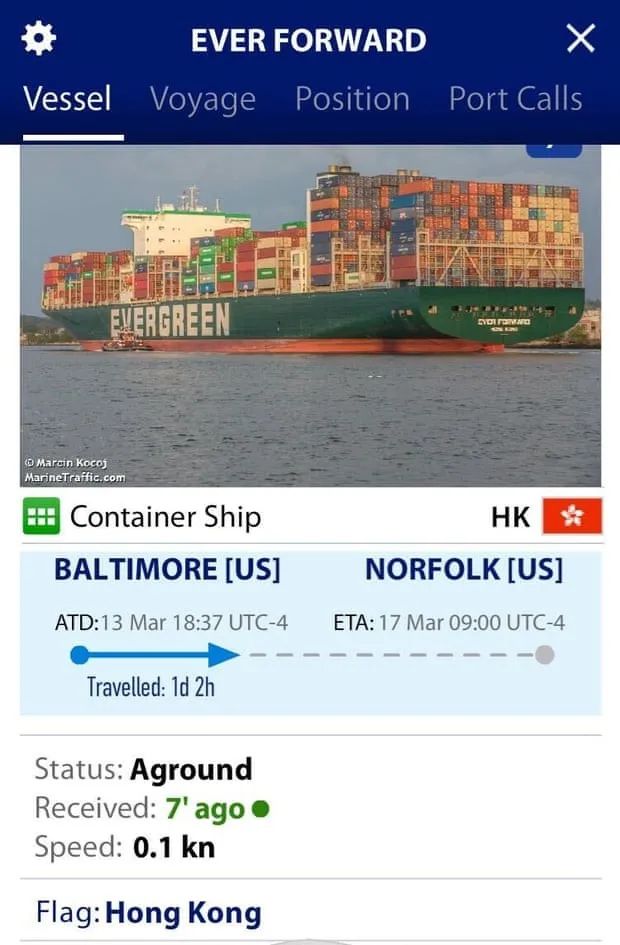 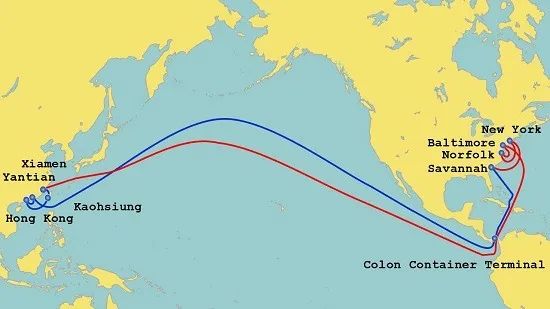 The ship EVER FORWARD, which was supposed to leave the port of Baltimore on the 13th, next sailed to Norfolk, New York, and as of the evening of the 15th the ship is still aground and the cargo will face delays! 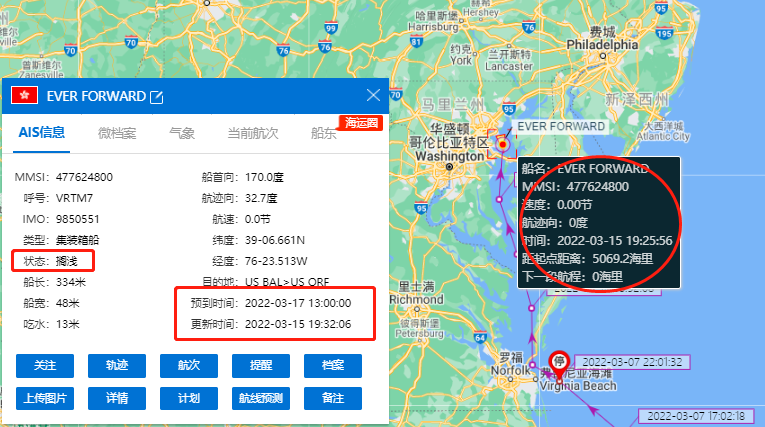 Evergreen Marine said on the 15th, is arranging underwater inspection by divers to confirm whether the hull is damaged, there is no fuel leakage, the company is coordinating with relevant units to assist the ship out of trouble as soon as possible, the accident does not affect other ships in and out of port operations.

Evergreen Marine held a corporate briefing on the 15th, just early in the morning it was rumored that the "EVER FORWARD" had run aground in the United States, and the outside world was worried about the problem of port congestion, which also made the media once filled the venue. Evergreen general manager Xie Huiquan said, really "very embarrassing", if the corporate briefing a week earlier, "EVER FORWARD" has not been stranded; if delayed a week, "EVER FORWARD "If the corporate meeting was a week earlier, EVER FORWARD would have been stranded. He said the grounding did not affect the channel, compared with the last "EVER GIVEN", the impact is much lighter. 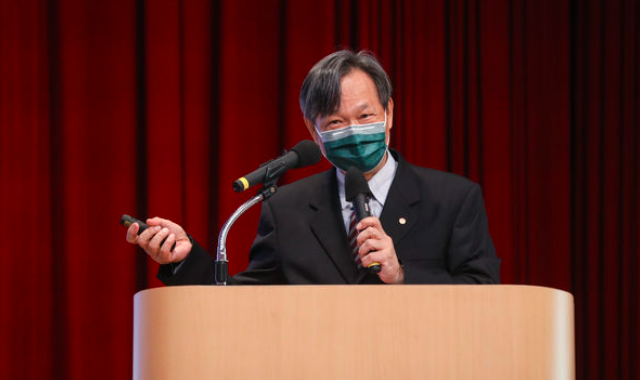 Looking ahead to this year's boom, Hsieh said that market demand is greater than supply, Europe and the United States this year, there are higher contract prices, port congestion continues, the low rate of permitted classes depress the normal supply of capacity, and the United States and Western terminal union contract negotiations are not expected to proceed smoothly, but he expects that the Russia-Ukraine conflict will not drag on for too long, after all, the continuation will affect the global economy, I believe it will be resolved as soon as possible, the overall view of "the epidemic still continues to plug the port, the price of freight is not easy to fall", still optimistic attitude.

Xie Huiquan revealed that the proportion of the U.S. line long-haul cargo volume of about 60% to 70%, about 30% of the European line, this year, the U.S. line and the European line long-haul freight prices have doubled last year, and customers are willing to sign, mainly because the market is expected to effective capacity is still affected by the epidemic, port congestion, so many manufacturers are willing to use a relatively high price, lock the available space. 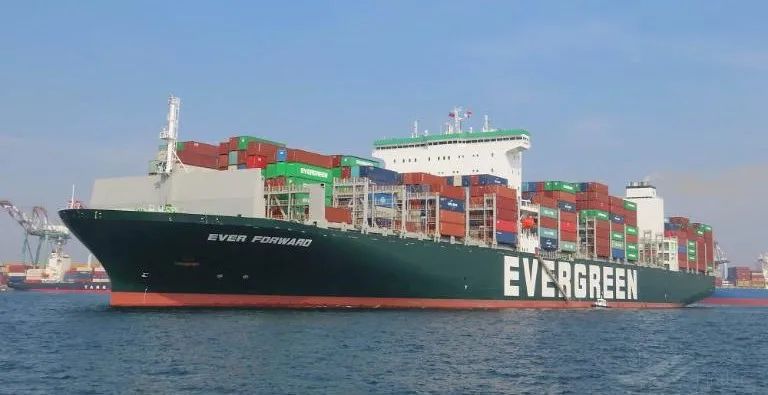 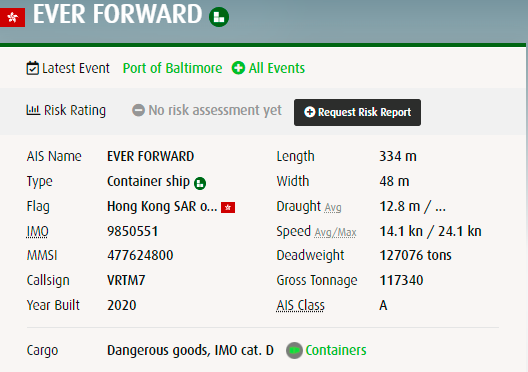