Sudden geopolitical disputes, ongoing CCVID-19, and weak inflation and demand will put the shipping market under multiple pressures in 2022.

After hitting a record high at the beginning of the year, the freight rate in the container shipping market has been declining for 14 consecutive weeks.

In order to stabilize freight rates, liner companies have adjusted their voyages, and 78 voyages have been cancelled in the next five weeks.

According to the weekly report on voyage cancellations released by Drewry, an authoritative consulting agency in the industry on April 22, in the major routes such as trans-Pacific, trans-Atlantic, Asia-Europe and Mediterranean, from the 17th to the 21st week from April 25, announced There were 78 cancelled voyages. Across all 725 scheduled sailings, the cancellation rate was 11%.

Of these, 64% of cancelled sailings occurred on trans-Pacific eastbound routes, with the main destination being the U.S. West Coast. 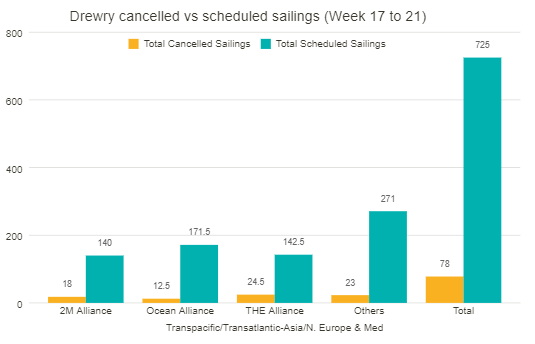 In terms of alliances, from week 17 to week 21, THE alliance canceled the most voyages with 24.5 voyages, followed by 2M alliance and ocean alliance, which cancelled 18 and 12.5 voyages respectively.

Drewry said that the ongoing uncertainty in the shipping market makes it difficult for shippers to plan their shipments in advance. Affected by CCIVD-19, Shanghai is still under lockdown, and cargo owners can only transfer the goods to other ports such as Ningbo Zhoushan Port and Guangzhou Port.